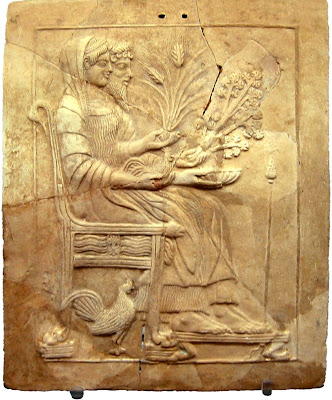 Becky did some reading and found herself in a philosophical mood:

I am not one to make a New Years resolution, but I do wonder what the New Year will bring and I contemplate what I will also bring to the New Year.

In reading "Traveling with Pomegranates" by Sue Monk Kidd and Ann Kidd Taylor, I found myself intrigued with Pomegranates and their symbolism and history.  We find many pomegranates used in early embroideries and they continue to flow across many bands of samplers today as well. This book speaks to me on so many levels, as a woman in my fifties, going through for years it seems now, many of the life's changes we as woman go through, having a daughter who is truly coming of age, at almost 15, becoming her own person, and my love for mythology and travel, that I can enjoy in my armchair through books like these.

The following is from the book and is what brought me to be writing to you today about the Pomegranate:

They are lavish symbols of fertility. When opened, they look for all the world like ovaries engorged with seeds, their insides bloodred. 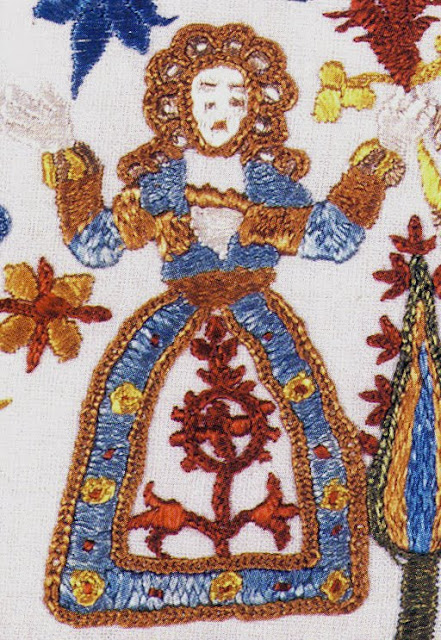 In some parts of Greece, a groom hands a pomegranate to the bride when they cross the threshold; in others, farmers break the fruit against their plows before planting. As I contemplate the fertility I hope for in my fifties and beyond – the regeneration of my creativity, the refinement of my spirituality, a new relationship with my body, the rediscovery of my daughter, indeed an inner culmination I cannot fully articulate to myself – I realize it cannot be plotted, orchestrated, controlled, and forced to bloom. It can only germinate naturally out of my experience….or not.

The pomegranate in myth symbolizes both death and life. When Persephone ate the seeds Hades gave her in the underworld, she ensured her return to it, initiating what impresses me now as an astonishing process: dying and being reborn. The secret of fertility.

Maybe a feminine thing, I don't know – but whenever I've managed to find new consciousness and renewals of my work, my relationships and myself, it has been by going down into what seemed like a holy dark. It has come through a deep metabolizing of my experience and moments of metaphoric dying. The old cycle: life, death, rebirth.

Another passage later wonders if maybe the fruit in Eden wasn't the "seedy apple" (pomegranates) all along? 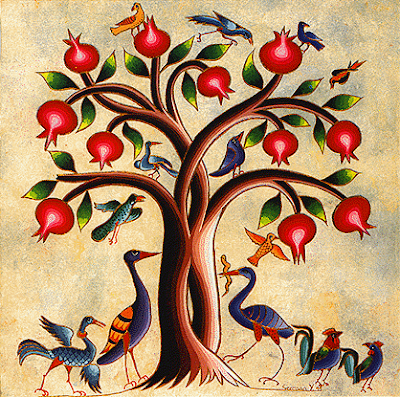 So why do I find a need to bring you this on pomegranates now, not this spring when the story of Persephone might be more timely? I find the idea of the regeneration of creativity to be what I feel at the New Year. I don't set out resolutions, but I do look to the future of a new year.  This regeneration that the pomegranate symbolizes describes how I feel about the New Year. My family has, for many years, spent the New Year holiday at the beach.  This year it was very stormy, but that sea air tends to be energizing to me. I find my creative juices there so often in or around the water.  I haven't spent a lot of time on astronomy; maybe there is a key there. I remember in my teens a lot of people talked about their signs, air, water, fire….I am Aries, a fire sign. You would think without knowledge that water would be against a fire sign! Putting out the fire and such, but for me it is truly energizing.  So as we spent two days in the stormy weather, I thought of what this year might bring and what I might accomplish; what direction my energy might take, I didn't come out with any direct answers, but I set myself ready for the possibility of many things. I found myself very hopeful. That to me is a good start, leaving the door open and ready.

Okay so Pomegranates! This brings me to their history, symbolism, and how we see them in our needlework.

Pomegranates in early mythology were a symbol of abundance and fertility. They were embroidered on religious garments by ancient Hebrews and said to have inspired the design of Solomon's coronet - 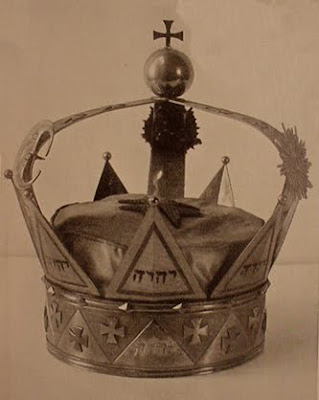 based on the design of the crown of the pomegranate.  In the Christian Church, the pomegranate represents hope of eternal life. It was an heraldic emblem of the sixteenth century, and popular on samplers and embroideries of that period. 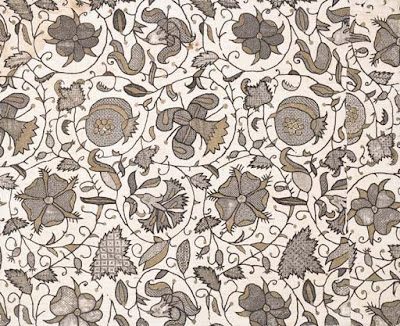 Jewish tradition teaches that the pomegranate is a symbol of righteousness, because it is said to have 613 seeds, which corresponds to the 613 mitzvot or commandments of the Torah. For this reason and others, many Jews eat pomegranates on Rosh Hashanah (actually, the number of seeds varies with individual fruits). The pomegranate appears in many forms in Judaica. 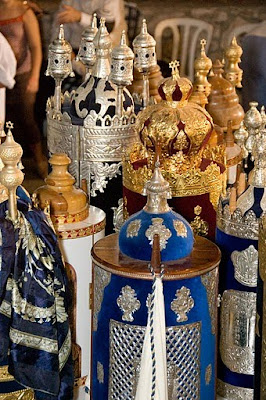 There are many versions of the Greek Myth of Persephone's abduction by Hades, lord of the underworld.  The pomegranate represents life, regeneration, and marriage.  Here is one version:

One day while out gathering flowers, Persephone noticed a narcissus flower  of great beauty. As she bent down to pick it, the earth opened and Hades seized her and dragged her down to his kingdom. 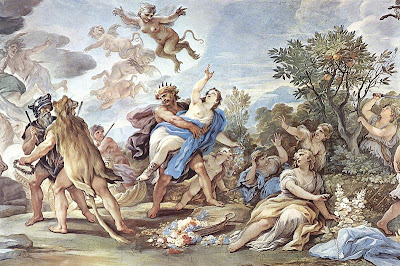 Persephone became the wife of Hades, goddess of the Underworld.  Demeter (goddess of the Harvest) searched for her daughter and not finding her went into mourning for her lost daughter. Thus all things ceased to grow. She prevented the earth from bearing fruit unless she saw her daughter again.   Zeus, the highest ranking of the Greek gods, could not leave the Earth to die, so he made a compromise with Hades to return Persephone to the earth for 6 months of the year (depending on the version of the story, some say 3 to 7 months, a third of the year – the time spent in the Underworld by Persephone varies by who is telling the story).  It is said that 6 months was determined by the 6 pomegranate seeds that Hades tricked Persephone into eating. There is a rule that anyone who consumed food or drink in the Underworld was doomed to spend eternity there. During the six months, when Persephone is sitting on the throne of the Underworld next to her husband Hades, her mother Demeter mourns and no longer gives fertility to the earth. This is the ancient Greek explanation for the seasons. Persephone's return from the underworld each year is marked by the arrival of Spring. 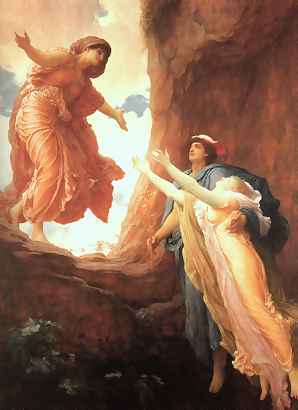 There are other Greek mythologies that depict the pomegranate in them as well.

The Greeks still imbue the pomegranate  with strong symbolic meaning and it is used to decorate on holidays, brought to honor new homes and is prominent at weddings and funerals. 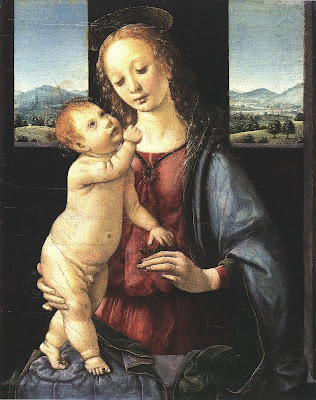 and other artists of his time often depicted a pomegranate in the hands of the Virgin Mary or the infant Jesus. The fruit, broken or bursting open is a symbol of the fullness of Jesus' suffering and resurrection. 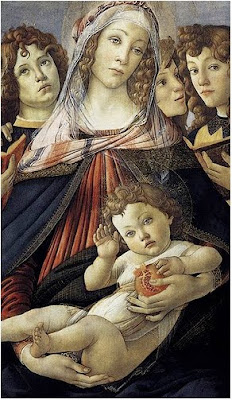 In needlework the pomegranate occurs on several white and colored samplers of the sixteenth century. Symbolizing the hope of eternal life and as an emblem of the Christian Church, it is shown open on one side to disclose its countless seeds. 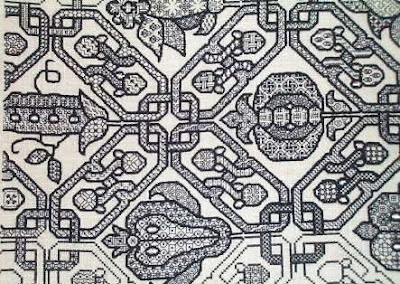 As an heraldic emblem it belonged to the English royal family in the sixteenth century, being one of the badges of Queen Catherine of Aragon and of her daughter the Queen Mary I, which no doubt encouraged its use in embroidery.

Also found on samplers are patterns representing Mother and Child, consisting of bands of fruit-bearing branches, with one large and one small fruit. Joshua and Caleb brought back pomegranates from Canaan along with the grapes. Many believe the tree of life we see depicting the forbidden fruit on samplers to be pomegranates instead of apples.  The pomegranate is also embroidered on many liturgical garments and linens throughout history.

The pomegranate seems to have been in existence ever since the earth was created.

So much is said of its medicinal properties throughout history and I haven't even touched on those!  This is a mere spoonful of information on this fanciful fruit.

Now, how about planning ahead, for a Spring Pomegranate tea party in May?  Not only celebrating Persephone and her return to earth and the regeneration of life, but Mothers and Daughters, with Persephone being returned to her mother Demeter. If you go to www.abouthyme.com/China/TeaRoom/party/may.shtml you can find some lovely recipes for pomegranate muffins and pomegranate punch to serve at your celebration.

Stories in Stone, A field Guide to Cemetery Symbolism and Iconography by Douglas Keister

Sampler Motifs and Symbolism by Patricia Andrle and Lesley Rudnicki

http://www.nuts-about-needlepoint.com/index.php?s=pomegranate    A design to stitch

http://blackworkarchives.com/bw_pome.html  A design to stitch

We have designed a pomegranate for you to stitch - we haven't quite finished stitching it ourselves, though, so we have just this photo to show you.  Click on the picture to take you to a chart you can print or download onto your computer. 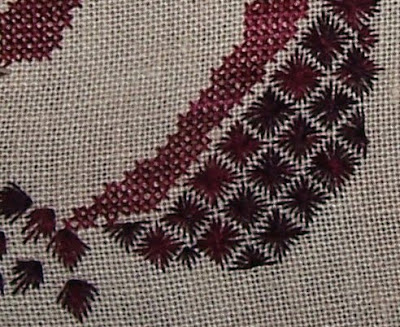 Just a quick note about the pdf file - if you have any trouble, please send us an email at inthecompanyoffriends@gmail.com  We'll be happy to send the chart to you by email attachment.