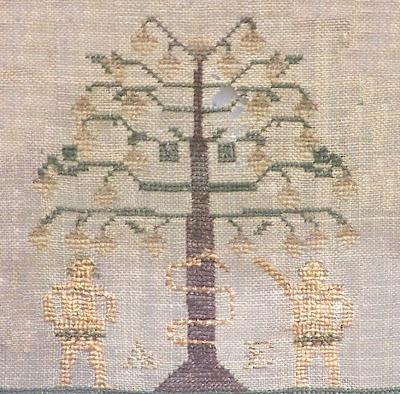 While we continue to wait for books on mermaids to arrive,  we've been spending some time thinking about another of our favorite sampler themes.  Adam and Eve Samplers, it seems to me, are especially engaging. Many times, the child who stitched the sampler shows the pair (with apples of all different descriptions) being tempted by the serpent. Eve is usually on the right side of the tree, and it is usually she toward whom the snake is facing. But little girls will add their own interpretations, and it is fascinating to see all the different Adam and Eve depictions and how they may be dressed (or not). Over the last few years, Becky and I have collected a few Adam and Eve samplers (and have our eyes on another couple!) Each has its charms, and the more we see, the more enchanted we have become! 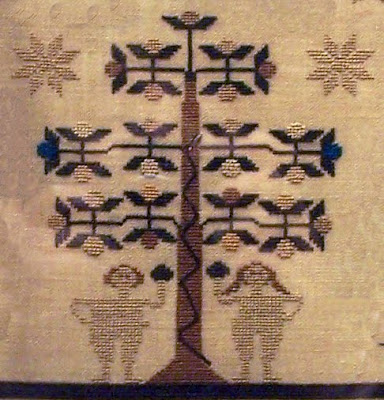 Needlework depictions of the pair usually show the couple facing us, reaching for an apple (or holding one), and wearing some version of a fig leaf. The bible states that Adam and Eve sewed together fig leaves and made themselves aprons. The variety of dress or undress of the figures is quite fascinating. It must have presented quite a challenge to the stitcher to portray Adam and Eve historically correct without clothing, but be conservative at the same time according to the custom of their time. Some samplers depicting Adam and Eve appeared to take on the dress customary to the fashion of the day.(and don't we wish we had one of THOSE samplers! 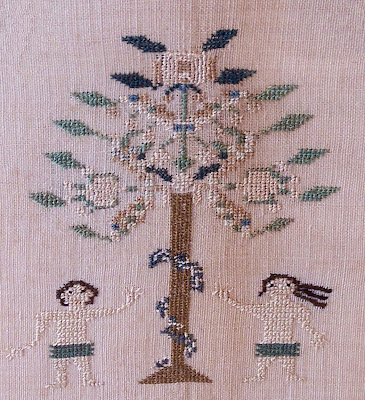 You can see above that Ann Wilson managed to indicate everything except the apples! Adam and Eve were the first biblical characters to be depicted on needlework samplers, though many biblical stories were illustrated over the years.  The Tree of Knowledge (as it is almost always referred to, rather than the Tree of Knowledge of Good and Evil) is treated with a great deal of liberty in design. This is where the stitcher could get really fancy. Some branched out all over the samplers, with other motifs attached to the ends of the branches that had nothing to do with the scene. The number of apples varied from 5 to 30. The average seemed to be about 15. An odd number was usually used to allow for a balanced tree with one apple on top, although many stitchers took several liberties with their designs, they seldom left a space blank to show where the offending apple had been. 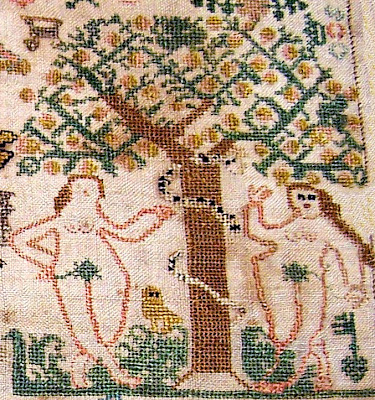 Animals appear in many of the scenes, usually a symbolic statement. In 1738, I.R.S. depicted an owl, presumably to represent knowledge. Many samplers show a squirrel at the bottom of the tree. In early northern symbolism the squirrel represents mischief so although you will find squirrels in lots of samplers, it takes on a new meaning pictured with Adam and Eve in the fall from grace. 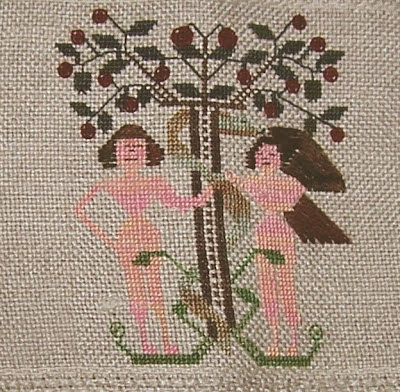 Whereas Eve is usually depicted holding or reaching for the apple, in my stitching, I had a different idea. While Adam was all too willing to blame Eve, he wasn't exactly blameless! 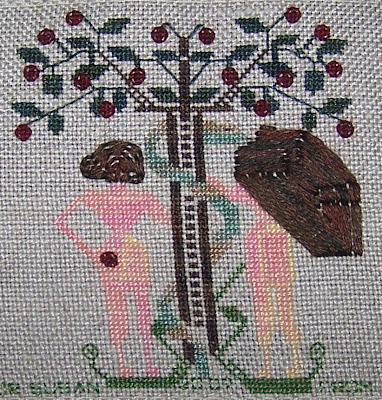 The first documented appearance in the American colonies of samplers depicting our first parents was in 1741 although they had made a previous appearance in England in 1709. While they were still a popular motif of their English counterparts, Adam and Eve were rarely seen after 1810 on American girl samplers.

By the end of the 18th century, Adam and Eve lost prominence on the pictorial sampler, giving way to the shepherdess and the fishing lady. The serpent was a major figure in most of the samplers. Frequently it was as large or larger than Adam and Eve, dwarfing the tree. It was more reminiscent of a large fat earthworm rather than a snake. 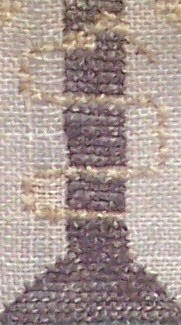 Sometimes the embroiderer added stripes and dots to the serpent, giving it even more pictorial importance, and usually it was coiled one to three times around the tree.

By the first decade of the 19th century, the Adam and Eve theme had lost favor with the girl’s schools and was rarely used, although there are examples that can be seen continuing to modern times. It is a universal theme that has endured for nearly three centuries of embroidery.

We love the Adam and Eve theme so much, we've used it for many of our products.  We've used it twice for Boxed Sets, and right now still have about two boxes left before they are retired!

Have a great weekend - we DO hope to bring you some very interesting thoughts on mermaids soon!


Much of the information in today's blog came from reading articles written by Darlene Anderson, or hearing her speak on the subject.  Thank you Darlene!