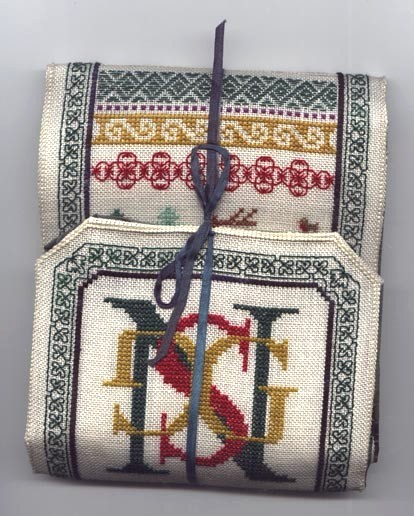 As we celebrated the 4th of July last week and the birth of our independence, my thoughts go to the early sailors and  military men as they set off to gain our independence, brought back items for trade from lands far away or carried our immigrants to this country.  Many carried the huswifs and other tokens, we so enjoy in the stitching world today.  What did theirs look like, what did they carry in theirs? Why did they carry the tokens they did? 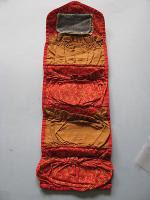 The earlier huswif was pronounced hussif, and this pronunciation survives in the application of the word to a small case containing scissors, needles and pins, cottons.

Huswifs were popular with the early infantry men.  They were in charge of keeping their uniforms in good order.  So they were sent off with huswifs made of bits of wool or cotton. Formed into pockets and pages to hold the important needle and threads, possibly an extra button.

What  is a huswif and who used it?

It is a small piece of cloth used to store scissors, needles and thread. Women , sailors and soldiers  often carried them.

What else did our military men carry with them to battle as tokens of remembrance of those they were leaving behind or as a comfort while they were away from home?

Perfume buttons
We learned about Perfumed buttons from Sherri of Patricks Woods, when she lead us in her beautiful Button Lovers Brag Book class. Below is information I found from a couple of button sites on the web.

It does sound romantic to send your lover off with your scent to remember you by as you go to lands unknown or into battles and difficult conditions.

Perfume Buttons were designed and manufactured in the United States in the early 1800's, incorporating fabric as part of their design - usually velvet. The ladies of the day wore these buttons on their dresses, putting their fragrance on them rather than running the risk of staining their clothing.

The story goes that during the Civil War the ladies would take a perfumed button off their dress and give it to their loved one, sending him into war with a romantic memento. Many stories are told of soldiers who died with a button in his pocket or stories that recount how this memento kept them alive during those stressful times. 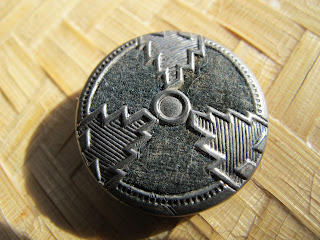 Perfume Buttons were also used earlier in history in France and England
http://www.auntjudysattic.com/About_Perfume_Buttons.htm

Victorian women wore specially designed “perfume buttons” to absorb perfumes too irritating to be applied directly to their skin.

What tokens did soldiers carry to war with them?
Besides the above-mentioned tokens, many soldiers did not leave home without a pocket bible, maybe a lock of hair of a loved one. In later times they of course had photos of the many family members and loved ones to carry with them.  Some would be lucky enough to have a special quilt to add warmth to their bedding in the early days.

I know a few years ago when I had a Girl Scout troop, we sent pocket flags to the soldiers and they were greatly received.  The book below is one my daughter read in high school and it also talks of various things soldiers carried with them and why.

If you had to go to war, what would you take as mementos of your family and loved ones to give you comfort?  It’s a daunting thought, how to put so much into a compact package.

We at In The Company of Friends, have a love affair with tokens and smalls that were treasured in prior years and love trying to recreate  a few of them for our customers to enjoy.  We hope you enjoy the bits and pieces of history we find to share with you as well and that all of you in the United States have all enjoyed a wonderful 4th of July with family and friends.

We, at In the Company of Friends have long been enamored of huswifs, and besides stitching some for ourselves, have added some of the flair of the huswif to our products.  Our latest is the Norfolk Inspired Spool huswif, that rolls up decorated pins and needles wrapped around a spool topped with a silk-covered pin cushion over-stuffed with 100% wool roving, surrounded by antiqued lace trim and adorned with an embellished pin! 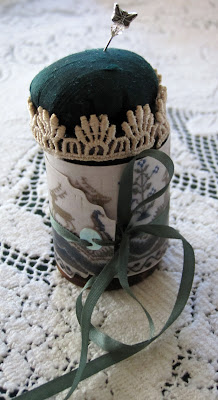