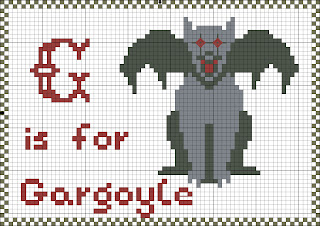 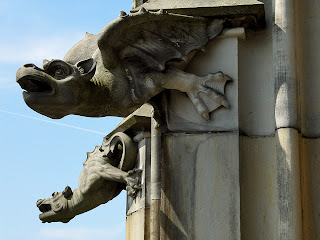 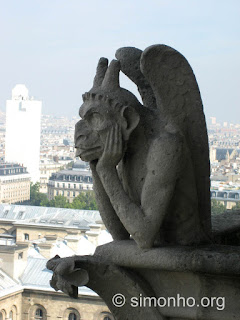 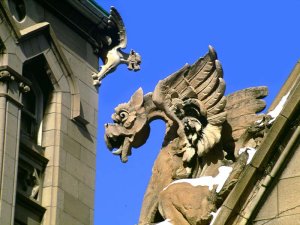 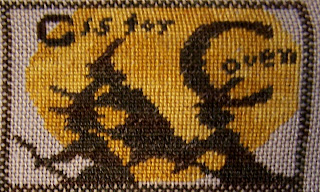 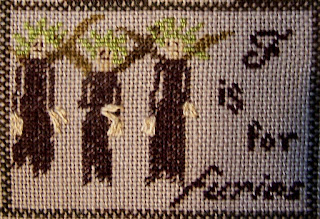 She still hasn't caught up to Jo, but  she's pretty happy.
Posted by Julie at 1:14 PM 7 comments:

On her second day in America, Dora awoke with some confusion.  She had been dreaming of James, and that he had met her ship and they'd been married.  When she found herself waking up in a strange bed and no sign of James, she wondered idly where he'd gone.  Then she remembered.  Captain Doble and his wife, Charity, had taken her in after telling her that James had died.
She fought to stop the tears from forming and wondered what to do now?  Rereading the last letter that James had left for her, she realized that first she would have to find a place to live and make arrangements to contact Mr. Otis in Andover.  James had mentioned taking a house for them - was that still available? 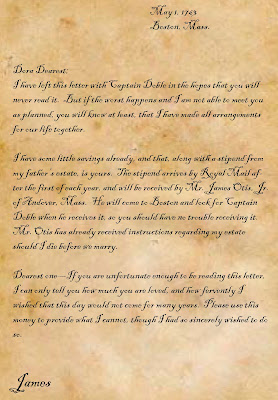 Over breakfast with the Dobles' she found that, indeed, the house had been taken for a year and was close by.  If she wished, Captain Doble could take her there this morning.  The sun was shining brightly on the harbor as they walked a few small blocks and came to a charming little house with a neat yard.  We found a drawing of the house that we think Dora made some time while she lived there. 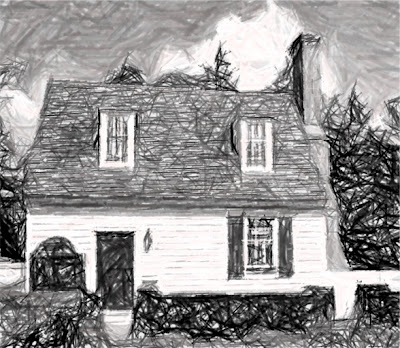 Inside, Dora found that James had brought in some basic furnishings, and she would be able to set up house very easily.  In the desk found in the front parlor, was a receipt from the landlord for a year's rent paid in advance.  For the first time since she'd left the ship, Dora felt like she'd come home.  In the next instant, the full realization hit her that she would spend her time in this home alone.  She hadn't really let herself believe this, but now, as she saw the careful preparations James had made for her arrival, she knew just how much she would miss him.  It was too much for her to bear.  She hated to break down in front of Captain Doble, and he seemed to understand, as he proposed that he "make an inspection of the grounds and garden to see if anything needed tending to" and stepped outside. 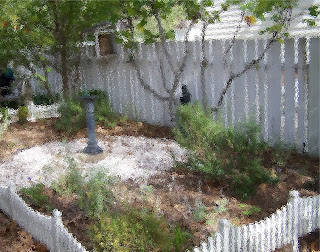 A drawing of Dora's yard.
Dora sank into a chair that had been placed by the fireplace, and realized that James' own hands had placed it there for her.  She wept for the first time, and after a quarter of an hour, she knew that she would wait here for James to return, as she was not convinced that he was really gone.  She'd be able to feel it if he were gone, wouldn't she?  And they'd never found him.  He could be ill somewhere, waiting to gain his strength before coming back to meet her.  She'd wait.
When Captain Doble entered the house again, she greeted him cheerfully and asked if he'd like a cup of tea?  She'd been rummaging in the cupboards and found some provisions were already here.  She'd later ask Charity to show her where to do the marketing and she'd be able to manage very nicely.  That afternoon, Charity and Dora were back in the little house, scrubbing and cleaning everything and getting all ready for Dora to move in, with the help of some of Charity's friends.  On her third day in America, Pandora Boxworth moved into her own home, and began to settle in, making friends easily as she met the ladies in Charity's circle.  No friend would ever mean as much to her as Charity, but it was good to have company, especially through the harsh winter.  Now that she had a pretty little home, she began to feel very much as if she belonged in this new land,  and as she talked with her new friends, and read the news accounts of the events going on all over New England, she began to realize that this new land was very different from her home in England. 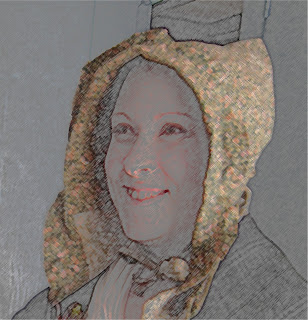