Becky is still deep in her research:

I hope this finds you all enjoying another week of doing some stitching and other simple pleasures you enjoy.  I had hoped to be telling you about Mermaids, one tail versus two tails, both historically how and why they have been used, as well as on stitching. But there is so much and some of the books have not arrived that I hope hold some interesting "tails" to share. So you will just have to wait for that to come in the future. Anyone who knows me knows I have a special fondness for mermaids! They swim around the guest suite and throughout other areas of my life. 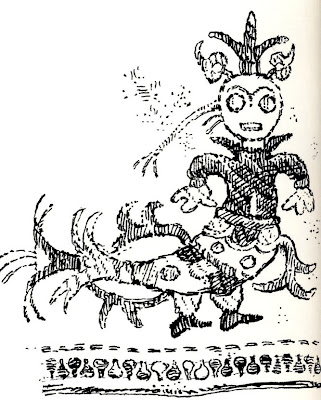 Here's a tidbit to tempt you.  Now, how many tails DOES this, uh, lady have?

Then I thought I could wow you with how many varieties of slushies I can make! My daughter Natalie had her tonsils and adenoids out yesterday, so nurse Becky has been creating as many icy drinks as possible to keep the swelling down. My patient is terrific, so my nursing duties are very easy.

But I decided to continue the discussion of Greek Embroidery. There is so much and I am still waiting for more books to arrive on this as well, so this discussion could continue down the road as well. The pomegranates intrigued me and I find myself going through more books on my shelves as well at various libraries I have available searching out more to see of the beautiful colorful embroideries found especially in the Greek Islands.  They used so many motifs to tell stories from their culture through symbolism. So I started looking at other motifs that are portrayed often, hence I found my two-tailed mermaid, which we will discuss later. Many of the patterns decorate household items, 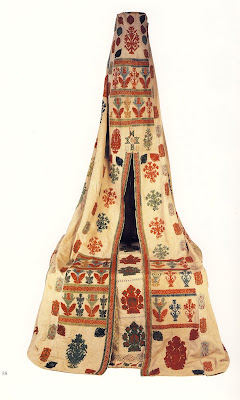 the colorful bands full of floral designs, birds, people and creatures. Many of the flowers and ornamental designs have intriguing faces in their centers. There is much influence in their designs from Italy, Turkey, Persia and other countries from the silk trade business.

Each island's design, though using the same motifs, has a very individualized style - so a peacock seen embroidered from one island will be very different from another. You can also differentiate the embroideries of each island by the stitches they used and the style of design.  Flowers and foliage take a secondary place in the islands; pride of importance goes to animals and geometric patterns. The floral designs used are in the stylized idiom instead of the natural form. The most important are the formal carnation originating in Persia and the rose and serrated leaf which is typical of Turkish embroidery.  Other important flowers found are tulip, hyacinth and cypress to name a few.

The animals seen in most of the embroideries stem from Persian and Byzantine designs and are in the traditional form, having little to do with the living form. The two seen most predominately are the peacock and double-headed eagle. The stag, lions, winged griffins, cocks, parrots and horses follow rank on the embroideries.  Many other small animals will be found as well.

The peacock has many stories in history through the Middle East, legend of the incorruptibility of its flesh or longevity and thus came to be used in the Byzantine Church as the emblem of immortality. There is much religious symbolism attributed to the peacock which makes it a popular motif not only in embroidery, but in most forms of historic artwork. 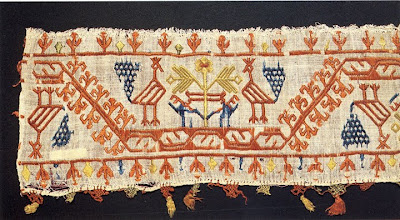 The double-headed Byzantine eagle became a symbol of Greek hopes of freedom during the Turkish occupation of their country.  Coins showing this symbol were so popular they were stitched into bodices and head-dresses. The design shown on the embroideries from Crete is a handsome form that looks more Russian than Byzantine. 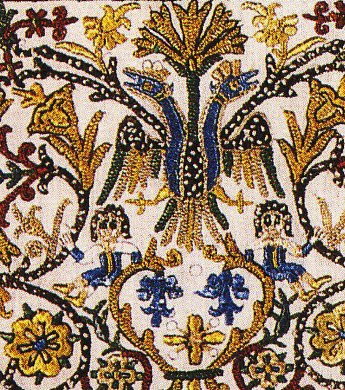 In the Geometric patterns there are three popular patterns to be found; many times these were seen on carpets as well as embroideries. The King pattern, Queen pattern and Glastra (Rhodes) pattern. Glastra is the Greek word for flower pot.   The King pattern in its simplest form consists of two conventional leaves set at an angle of forty-five degrees on each side of a stem.  The Queen pattern roughly fills a diamond shape, which supports three prongs arranged to fill in the top of the diamond. The prongs are very often cypress trees or geometric peacocks. The Glastra pattern is medallion-like in shape and nearly always used as a single unit in rows, either vertically or horizontally. It appears to be a derivation of the Tree of life design with a vase of flowers taking the place of the tree.

The human figure shows up in many forms throughout the islands. In Epirus we find them on bridal cushions. In Crete we not only find little men serenading their ladies with a fiddle, but the figure of the double-tailed mermaid. The tails of these mermaids many times turn into flowers, so that she appears as a torso in a vase of flowers. A must to see! 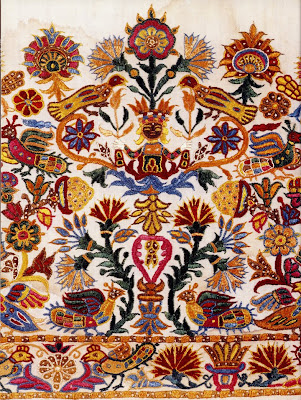 Sporades is where you find the most human forms inhabiting their embroideries. Many are dancing, on ships, in bed tents....

Mermaids are also found in Skyros and another interesting creature, a cat or bird with human face. These are seen also on Persian pottery of the thirteenth century. Many Goddesses appear in very stylized forms, some with elaborate headdresses.

All the silks used in the old embroideries were dyed locally with homemade vegetable dye. Some of the islands were famous for certain colors - Amorgos for red, Karpathos for green. Many beautiful colors were used and that is what I find so attractive in these embroideries. A favorite in many of the works was the red monochrome design.

So I challenge you to go on line, go to your library and check out the beautiful embroideries of the Greek Islands and tell us, what is your favorite motif and why. We would love to hear from all of you. Mine of course is that two-tailed mermaid and I promise you will hear more about her soon. 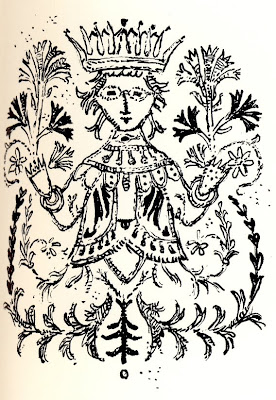 Photographs of the embroidery is from another book that Julie is hoarding - er - reading right now - Embroidery of the Greek Islands by Roderick Taylor.  This is a beautiful book sumptuously illustrated.  The motifs shown in these embroideries have inspired both of us to design something new!

The pomegranates from last week are still in our thoughts, and Julie has found some very interesting recipes featuring this exotic fruit. Here is a lovely chicken recipe, a luscious looking salsa, a watermelon gazpacho featuring a pomegranate garnish and a relish that would be wonderful with pork or lamb!

Well, this wraps up the Greek Embroidery - what of the Geek Chicanery?  First of all, of course, chicanery is a bit much - but it sounded good with "embroidery"!  So many lovely people have signed up to become followers - we hope you're one of them!  But have you done the "second part"?  Do you get automatic updates?

Geeks who write these programs don't really mean to be tricking the rest of us, but they don't realize all these technological advances aren't really easy for us to understand.  It was a long time before I found out how following works - I thought it was just a nice way to show support for a blog you like (and it IS), but it will also deliver automatic updates of ALL the blogs you follow, along with any other web sites you want to add.  The "trick" or "catch" is that it delivers it all to a page they don't really tell you about.  So unless you kind of "stumble upon" it, you don't know!

Go to Google Reader and sign up - it's free.  I also added this page as one of the 8 or 9 home pages I have - they all open up automatically for me when I launch my internet browser.  So it's there ready for me to read throughout the day - a long list of blogs and sites, with unread entries in bold!  If Google isn't your favorite place try Bloglines or Netvibes. They both have the same services, and actually, Netvibes looks like a step beyond - I'm off there now to check it out! 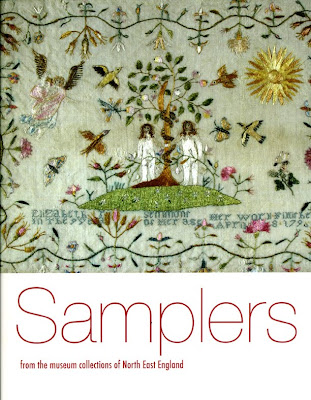 One of our favorite blogs, Jacqueline Holdsworth's Needleprint featured a new sampler book not long ago.  We want to second her nomination that this book warrants your support, as sales help to put some money in the coffers for a number of museums in northern England, and allow them to continue to care for their collections!  While the book has a few limitations - the photos are not the wonderful ones you'd find in a Needleprint publication, for example - the samplers are well worth reading about, and the price can't be beat!  It's just £12.95 plus £2.95 shipping and handling for those in the UK - I'm sure it's a bit more for other parts of the world, but still a bargain!  That translates to $21.06 US for the book!

Besides the book, you also get a CD (and note that if your CD doesn't work, which sounds likely, they will replace it) with photos from the collections.

The book and CD represent the collections of fifteen museums in the North East of England.

A few excerpts from the CD: 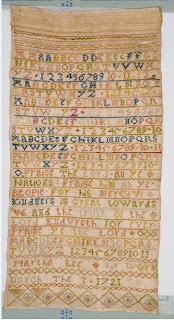 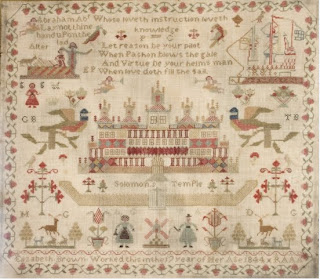 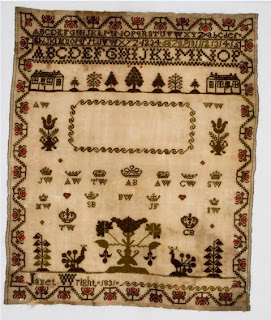 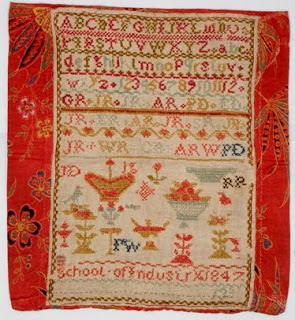 This School of Industry piece is so interesting, isn't it?

And a couple of pages from the book: 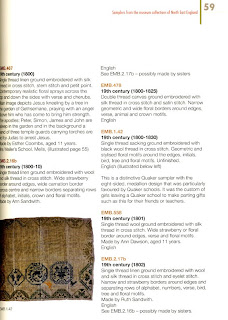 One of the limitations of the book - The Quaker sampler shown is upside down!  But you can see that there are full descriptions. 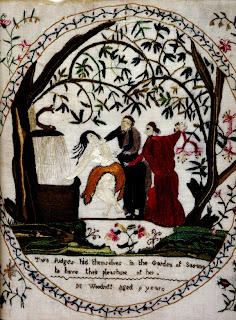 This is especially intriguing - imagine 9 year old M. Woodruff carefully stitching this caption while her teacher looks on approvingly:  "Two judges hid themselves in the garden of Susana to have their pleasure of her."

On a tragic note, I know we all feel the devastation we are seeing in Haiti, as they try to recover from this horrific earthquake. Our prayers and thoughts go out to everyone there and those of you who have friends or loved ones there.