We belong to a local needlework guild - The Pacific Northwest Needle Arts Guild, or PNNAG, and we wanted to do something fun with them, so we sponsored a pin cushion contest!  People were invited to bring in their entries early in January.  An independent judge chose three winners from the assorted pin cushions we received, and we awarded the prizes earlier today!  We wanted a lighthearted title for the contest - perhaps a little irreverent - so we came up with "Poke Me Baby".  Our Grand Prize Winner titled her cushion "Poky Baby" - such a cute idea! 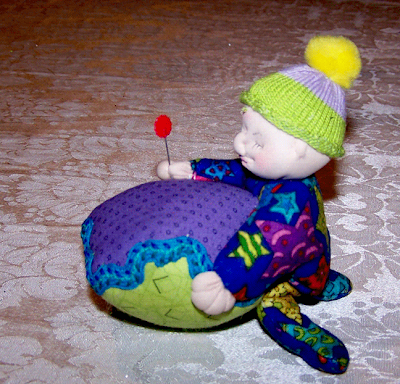 We had two "Best of Category" winners as well - this ingenious flower is titled "One of My Favorites", and is fashioned after a favorite flower that grows in the maker's garden. 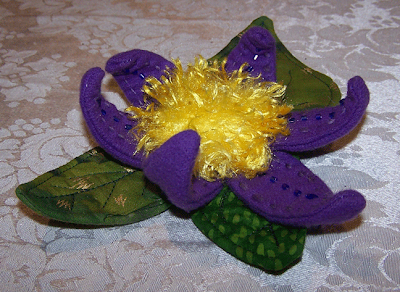 The second is "House of Pins" - a rug-hooked cottage adorned with chintz flowers! 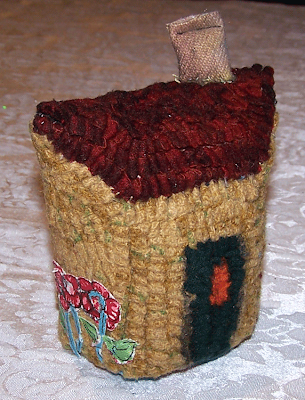 Thank you to all the entrants - what a fun contest this was!
With our minds on pins and pin cushions, Becky did some research:
As you can tell from our business, Julie and I love all the toys of the needle worker...especially anything you can stick a pin in!  So many needle work techniques lend themselves to creating pin cushions and it seems this last year there has been a resurgence in interest in creating these small tokens of affection.

Pins have been used throughout the ages and were once very precious, as they were expensive and hard to come by, so containers and safe homes for them have been popular as well. We have many verses and stories that involve the pins, needles and cushions they live in.   I decided this week we would share some of what we have found on the history of the pin cushion!  The internet is just such a wonderful resource these days when you decide you want to know about something.  So away I went to my friend Google and typed in "Pin Cushion History".  Not only did I get information on the pin cushions I was looking for and many beautiful sites creating unique pin cushions, I found human pin cushions,

There was also a band called the Pincushions.

Now here is the problem with the research on the internet, who do you believe? One article says the first pin cushion came in during the Tudor period of  the 15th century and another states they became popular in the 1700's. During the 1800's pin cushions began to be made commercially as well. They would commemorate events and were popular souvenirs.

Before pin cushions, pins were carried in containers of bone, ivory, silver....

Simple shapes of beautiful silks gave way to ones greatly enhanced during the Victorian era.  Pin cushions found themselves mounted on stands and adorned with trims, tassels and laces. Many were formed in shapes of shoes, fans, animals, fruits and vegetables....

I read that the small stuffed elephant that Stieff stuffed animal company is so well known for began it's life as a felt pin cushion and that is what started the company, that grew into the beautiful animals we know it for today.

So why is that tomato pin cushion so popular and why has it lasted through time? Well maybe it started in Italy where the tomato was so precious and important in their welfare and their food? In Italy there was a time when a tomato was displayed on the mantle over the fireplace to bring prosperity and good luck and to the home owner. They were also believed to keep away evil spirits.  At certain times of the year, tomatoes were hard to come by, they could not be grown and they also rotted easily, so they were created out of fabric to replace the real tomato for this symbol of good luck and to be used on the mantle of the home. They were filled tightly with sawdust and were then also used as a pin cushion.
Another article I read on the pin cushion tomato informed me that the reason they have been around for so long, is that they are really useful in their design. The sections of the tomato pin cushion were used to place the different sized pins and needles, to keep them in order. Also the special strawberry emery used to keep the precious pins and needles sharp. So why do you think this tomato has been in use for so many centuries?

Layette pincushions were another type of popular gift during the time between 1170 and 1890. The beautiful satin forms with verses spelled out in the heads of the pins " Welcome Sweet Stranger", " Sweet Babe"....were special gifts for mothers to be.

This is a nice article if you favor these treasures.
This site is my favorite for showing and telling interesting history of various types of pin cushions. It is a must to take a stroll through, if you enjoy pin cushions.


Here is a fun story - "The Letter on The Pincushion".

I love the "Make Do" pincushions we see from some of the colonial times into our current day, where people take something that was once something else and maybe a part is missing or such, but they turn it into the base for their pin cushion. We see many of those in various forms of needlework and quilting arts.

Then the popular Biscornu has taken the needlework world by storm this last couple of years, in all the unique designs we see created in this 8-sided wonder. 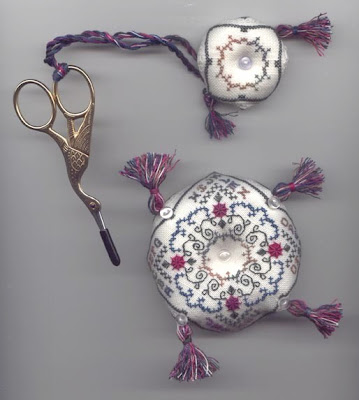 But I am really wanting a beautiful pin ball, one that once hung from a ladies' chatelaine to be added to my collection one day.

I hope you have enjoyed this quick walk through the world of pin cushions and that you and your friends will continue the tradition of giving these tokens of friendship to one another.

Here is a free chart  from Brookes Books, to cross stitch a pin cushion.

And here is a wonderful online version of an old book on the subject! 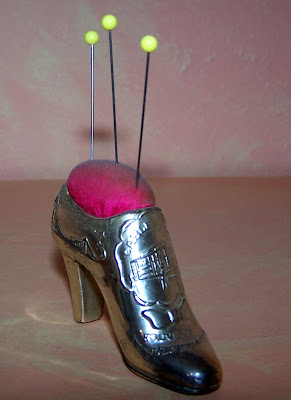 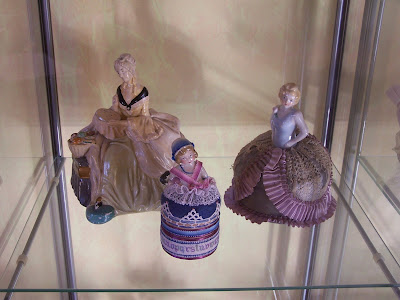 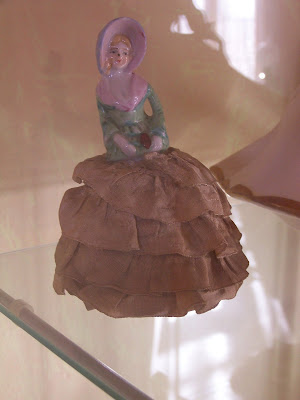 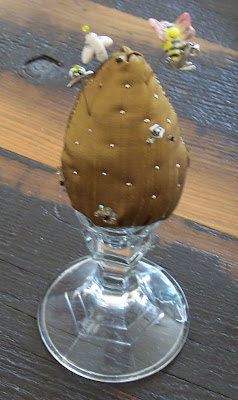