Our apologies for waiting so long to post on the blog - we got mired up in some investigative work and forgot all about it.  Now you know - one or two little needlework mysteries, and we can forget all our obligations, hahaha.

We are enjoying the thrill of the chase as we track down images for what I'm sure you'll all get tired of hearing of as "the book".  Our friend and colleague, Joanne Lukacher has written a fascinating book on Norfolk samplers and we want to be able to show as many as possible in the upcoming book.  But in this transient world, where samplers are bought, sold, bequeathed, etc., just because we know a sampler exists, doesn't mean we know where it is or how to get a good image of it.  We've come to think of these samplers as the "lost girls"!  If anyone knows the whereabouts of these samplers, and can point us in the right direction to contact their owners, please let us know.  Our email is inthecompanyoffriends@gmail.com, and we'd be so happy to hear from you!  Here is the list of "lost girls":

We do have a new letter for the Dark Alphabet - V is for....  but before we get to that, we couldn't resist throwing a valentine into the mix....  We recently sent out our first Tokens of Friendship subscription gifts - and have heard that people loved them. 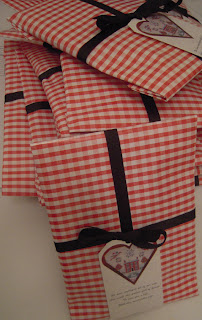 The gifts people gave themselves or their stitching friends came wrapped and packaged with love!

After Jacqueline showed hers on her Needleprint blog, we got quite a few requests for them - but, alas - these were a very exclusive item designed just for the subscription members.  We hope to entice you to join in next year by showing what everyone got this year.  We do appreciate all who had faith that a "surprise gift" was going to be something they wanted to receive.  It was so fun to design and make these little etuis, and since they were arriving in mid-February, we thought it only fitting to start with a Pocket Full of Hearts! 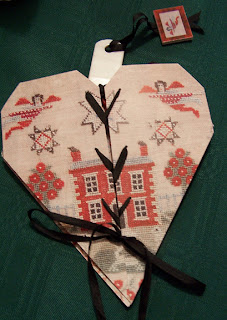 The lacing up the front and the plain back with the mother-of-pearl ruler only hint at what's to come in all the pockets!  There's a pocket in the back, but inside that is....

a smaller pocket with the ruler, and open up the big heart and you will find another heart pocket inside with the lovely red speckled scissors!  A trio of mother-of-pearl hearts hold coordinating silk threads, and the other "wing" holds beaded pins, a needle and a bejeweled thread counter! 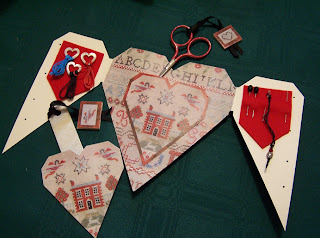 And of course, after Valentine's Day, our thoughts naturally turn to....
Voodoo and the Vandyke Stitch 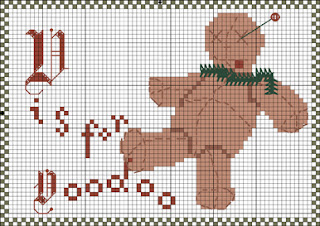 The word Voodoo has been greatly distorted and misused; human sacrifices, vampires, dripping blood and devil worship all make the stuff of spooky novels and Hollywood movies. Yet none of these originated with or ever belonged to Voodoo!

Voodoo is a life-affirming practice that encourages its participants to better understand the natural processes of life and their own spiritual natures. Brought to America by the slaves from Africa, it was then combined with Catholicism of the land owners.  You find different versions of Voodoo in various regions. So Haitian Voodoo is a bit different than New Orleans Voodoo.....

As you can imagine there are many versions depending on who you read in regards to this ancient religion and practice.  I found it very interesting to read some of the historical information that demystifies the first thoughts we have when we hear the word Voodoo.  I know most of us see a Hollywood version of a witch doctor with voodoo dolls and pins, dancing and chanting and using his craft for evil. But truly this was a religion used to encourage good and bring comfort to those practitioners during ceremonial times in their life as well as everyday living.  Rituals celebrate special events and bring the best of luck to those around them as well as those who have passed.

Definition of Voodoo
voo·doo  (vd)  n. pl. voo·doos
1. A religion practiced chiefly in Caribbean countries, especially Haiti, syncretized from Roman Catholic ritual elements and the animism and magic of slaves from West Africa, in which a supreme God rules a large pantheon of local and tutelary deities, deified ancestors, and saints, who communicate with believers in dreams, trances, and ritual possessions. Also called vodoun.
2. A charm, fetish, spell, or curse holding magic power for adherents of voodoo.
3. A practitioner, priest, or priestess of voodoo.
4. Deceptive or delusive nonsense.
tr.v. voo·dooed, voo·doo·ing, voo·doos
To place under the influence of a spell or curse; bewitch.
adj.
1. Of or relating to the beliefs or practices of voodoo.
2. Based on unrealistic or delusive assumptions: voodoo economics.

Vodou (Also spelled Vodoun, Voodoo, and several other variants) is a syncretic religion combining Roman Catholicism and native African religion, particularly the religion of the Dahomey region of Africa (the modern-day nation of Benin). It is primarily found in Haiti, New Orleans, and other locations within the Caribbean

Voodoo is one of the world's oldest forms of religion which has been associated with witchcraft and has been around in Africa since the beginning of human civilisation. Those who practice voodoo believe that nothing and no event happens on its own but that all things are connected, following this theory what you do to another, you do to yourself.

The ancestors of those who follow the voodoo religion are thought to be part of the world of spirits and these spirits can be called on to help and give protection and guidance. The voodoo priest or priestess can also use herbal remedies or medicines which have been passed down through families to help those who are sick, with faith healing playing a big part also in the religion. Voodoo has always wrongly been categorised as an evil form of witchcraft with the rites and rituals being performed for evil doings however this is untrue.

The Voodoo doll of course is another aspect of this religion, or is it part of what we see in the movies and not part of the religion at all?  It is very romantic in some ways or evil in others as it is portrayed most times in the movies. But again there are many misconceptions of what voodoo really is, and it's proponents explain that it is not for the use of evil.

The doll is not so much a remote control for manipulating another person as much as it is a representation of the person used to appeal to the Voodoo spirits. The Voodoo straight pin, or thorn, is actually used to attach something to the doll to make the doll represent, or even become, the person to whom it is targeted.  To cause the doll and the intended person to become one and the same, one, or both, of two techniques may be used. First, label the doll as the targeted person by pinning a picture of them, or at least, their name, to the doll. Some dolls are intentionally with blank faces to the user can draw in the targeted person's image. Second, made the doll become the person by attaching or inserting a thing that was previously from, or in intimate contact with the person. Some examples of this would be a lock of hair, a nail clipping or piece of their clothing that had been in intimate contact with them.

In Voodoo, the priestess (Queen) or priest (Doctor), serves the spirits. The practice of gris-gris magic is a petition to the spirits. There are however certain spirits that can be coerced, controlled or bribed and certain persons who manipulate them in such a way. While the interpretations vary, such spirits are generally the Congolese Ghédé spirits and the person who manipulate them are Witchdoctors. On some occasions, an otherwise benign spirit may be transformed into a malicious nature. When this occurs the spirit's eyes turn to red and the suffix "oje rouge" ("red eyed") is added to its name. In Voodoo the concepts of white magic, or black magic have no meaning. When evil is manifest, its color is red. When a Voodoo doll is used for evil or harm, the practitioner is engaging in evil witchcraft, which is counter to, and proscribed by, actual Voodoo.  Such intentions, if known, are normally censured and interdicted by a Queen or Doctor.

As those who enjoy needlework, we enjoy symbolism as well of various motifs and such. So I thought you might enjoy the symbolism of the various colors of pins used in poking voodoo dolls to achieve different spells.
Each pin color have different symbolism.
Red represents power
yellow for money
green for tranquility
blue for love
purple for spirituality
black for pain or healing
white for positive energy or good karma
pink for death

Here is an example of one use for the voodoo doll. Focus on what you want from your romantic relationship. Once you are certain about your thoughts, stick the pin into your voodoo doll's heart or stomach area. These areas will support your heart's desire and your gut feelings or intuition.

How to make your own voodoo doll.
Voodoo dolls come in many shapes and sizes.  You'll have fun looking at all the different variations.

Voodoo has become so commonplace in the popular culture that there are many books, movies and songs about the craft.

This is just a small taste of information on this area alone. So much more can be found if you Google the internet for these subjects.  Remember to take it all with a grain of salt and  just enjoy the knowledge.

Vandyke Stitch
The Vandyke stitch creates a wide line with a plait in the center and is attractive worked in multiple rows to create a heavy border. After the first stitch no ground fabric is picked up.  A lustrous embroidery thread shows this stitch very well.  Look for directions on how to produce this stitch in The Complete Stitch Encyclopedia by Jan Eaton, at Wikipedia,  Best Hand Embroidery website, or Arts and Designs.

You'll see that there is just a small bit of this stitch on the design - for the scrap of woven fabric on around the doll's neck.  As always, click on the picture of the chart to go to our Freebies page, or click on the word "Freebies" in the side bar.  Have fun stitching and be-witching!
Posted by Julie at 6:17 PM