Here There Be Wyverns...

Though W seems like it should be for Weejee, of course, that wasn't going to work for our W word - but who can resist a Ouija board?

We had the great good fortune to spend some time with the Swan Sampler Guild members at their retreat last summer, and to take Betsy Morgan's Toy Chest Etui class.  We thought it would be cute to make up a little favor for the class attendees and we came up with this Ouija board as an addition to the toy box.  Since then, Betsy has been traveling about and showing the Ouija board to other classes and we've received requests for them, so, with Betsy's blessing, we are offering it now on our website.

This cute Ouija Board does triple-duty!  It holds your threads for you, and the millefiori heart is held in place with magnets - so it will also hold onto your needles.  But the special trick is that the heart planchette moves around the board mysteriously! (hint - if you move the magnet under the board, the heart will follow).  Don't like how the "he loves me, he loves me not" daisy petals turned out?  Now you can control your destiny - and your stitching!


W is for Wyvern 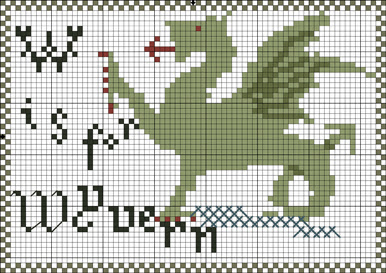 Wyvern or Dragon, Can You Tell The Difference?

The traditional description of a Wyvern is of a creature that resembles a small dragon but with only two legs and a barbed tail. The barb is often said to contain poison. In many ways the wyvern is closer to a winged serpent than to a fully fledged dragon.  Wyverns rarely if ever breathe fire.

There are few surviving legends concerning wyverns specifically. It appears to have been a rather unpleasant beast and is associated with plague, pestilence and destruction.  Although it appears rarely in written tales, the wyvern is common in heraldry. It is normally described on the blazon as "statant" (standing). Presumably its popularity is due to its destructive nature - an example of heraldically "bigging oneself up"! You can find many a banner with a Wyvern in place of honor for a family or town.

Arms for the City of Leicester

The usual spelling wyvern (older wivern too) is not attested before the 17th century as 'winged two-footed dragon'. It is an alteration of Middle English wyvere, wyver (13th century), loanword of Old French wivre (French guivre and vouivre), itself from Latin vipera 'viper', 'adder', 'asp', altered in Proto-French to wipera by Germanic influence. But as you will see if you research just a little, many spellings exist throughout time.

The wywern is truly a terrifying creature, it can turn humans into charcoal in a matter of seconds with its flame,which reaches temperatures of above 700 degrees Fahrenheit!!!! (wouldn't you like to know who measured that? ) Some wyverns also guard treasure from humans.

But there are many more legends about dragons in Italy, particularly in Umbria. One of the most famous dragons of Italian folklore is Thyrus, a wyvern that besieged Terni in the Middle Ages. One day, a young and brave knight, tired of witnessing the death of his fellow citizens and depopulation of Terni, faced the dragon and killed him. From that day, the town assumed the creature in its coat of arms. Also a Latin inscription supports this: "Thyrus et amnis dederunt signa Teramnis" that stands under the banner of the town of Terni.

There are a few cryptozoologists who think that the wyvern actually represent pterosaurs, winged dinosaurs which disappeared about 65 million years ago, and which by some far-fetched opinions cohabitated with humans. But, today there is no conclusive evidence to back this theory. The winged creatures are described as very powerful, bloodthirsty and extremely cruel, being the perfect hunters. The legends claim, with some shivers of fear, that the legs of these creatures were the size of oak trees, which could crush entire villages with a move, while their eyes were hypnotizing and terrifying at the same time. They could lift with no difficulty from the soil up into the sky, from where they could see any prey and kill it with no remorse.

The wyvern had the capacity to emit flames out of its nostrils, while its breath was terrible, keeping some traces of the feast before. Because these beasts were very powerful and fearsome, the one who had the courage to kill them as trophies became true heroes, who had a physical and mental force way above normal. Many times the purpose was to impress a maiden in distress, one of the main themes of the chivalry model

Wyverns have made their way into modern culture through movies, and of course, books.  As you might imagine, Here Be Wyverns by Nancy Spies is our favorite.  Besides the imaginary creatures from the 6th to the 16th century, there are designs for animals, water creatures, architecture, borders, alphabets, and all-over designs of the medieval period.  The phrase "Here Be Wyverns" is from old maps where unknown territories were labeled "Here Be Wyverns", "Here Be Dragons" or "Here Be Monsters".  (Might as well cover your bases).  We love the beautiful old maps which have beautifully detailed pictures of such monsters. 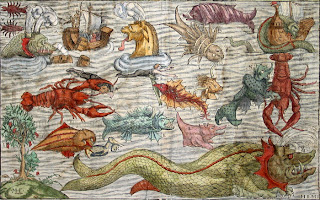 A young girl called Maud was walking through the woods when she found a baby wyvern, bright green and no bigger than a cucumber. She took it home to keep as a pet, feeding it on milk. It grew very fast and began to eat chickens, then sheep, before graduating onto cows. Finally, as an adult, it turned into a man-eater, but it remained friendly toward Maud. It made its lair on a ridge in Hauge Wood and always followed the same path, known to this day as Serpent Path, to the river.

You can continue reading the story here on the Mysterious Britain and Ireland site.

How to Draw a Wyvern
I know we have some younger followers of this site, following the mystical creatures in the Dark Alphabet. At Dragonart.com you can learn how to draw a Wyvern, young or old. You may wish to design your own creature for your own mystical story of this beast. If you write one, please share it with us! We would love to read it.

Gamers are also familiar with this mythological creature, which is featured in card and video games.

Also known as the Herringbone, Mossoul, Persian and Russian stitch to name a few.  It is a common stitch in sampler making and appeared as early as 1681 on an English Band Sampler.  We just loved the name Witch Stitch as befitting the Dark Alphabet!

The Witch Stitch creates a pretty crossed zig-zag line. It is worked left to right and is an easy and quick stitch to work. This stitch may also be used as a filling stitch. Using a variety of threads will offer variations in the look of this stitch.  This stitch can also serve as couching for silk ribbon to offer yet another look.

As usual our favorite guides are The Complete Stitch Encyclopedia by Jan Eaton and The Red Book of Sample Stitches by Eileen Bennett.  In a Minute Ago has a good description on their site.

Julie's design uses the Witch Stitch just for the shadow cast under the Wyvern.  As always, click on the picture of the chart, or on the word "Freebies" in the side bar to be taken to our Freebies page.
Posted by Julie at 4:20 PM