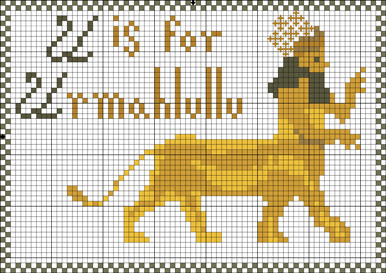 You read that right - Urmahlullu.  If you think we are reaching far into the mythology bag for some of these, you are not wrong, hahaha.  We were drawn to the look of this character far more than his mythology.  Isn't he charming? 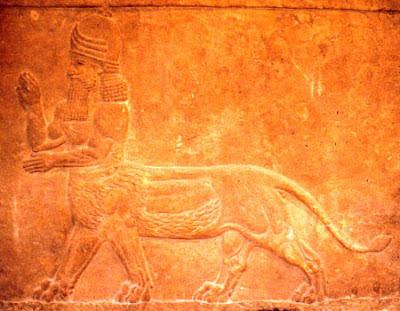 Well our friend Urmahlullu  is the protector of the loo! He is a hybrid mythological creature that combines the body of a lion and a centaur in Ancient Mesopotamia.  He has now worked his way into the gaming world and if you are one who frequents the computer game world you are probably very familiar with many of the various  images of Urmahlullu. (Bet you can't say that fast five times!)

Hybrids are mythological creatures combining body parts of more than one real species. They can be classified as partly human hybrids (such as mermaids or centaurs), and non-human hybrids combining two or more animal species (such as the griffin). Hybrids are often zoomorphic deities in origin who acquire an anthropomorphic aspect over time.


Partly human hybrids appear in petroglyphs or cave paintings from the Upper Paleolithic, in shamanistic or totemistic contexts. Ethnologist Ivar Lissner theorized that cave paintings of beings combining human and animal features were not physical representations of mythical hybrids, but were instead attempts to depict shamans in the process of acquiring the mental and spiritual attributes of various beasts or "power animals".  Religious historian Mircea Eliade has observed that beliefs regarding animal identity and transformation into animals are widespread.

I find many images of  Urmahlullu, but I have had a hard time finding the stories of how he truly became the protector of the washroom. Wikifur says possibly he protected it from the evil demon Sulak who resembled a regular lion - according to "Mesopotamian Protective Spirits" by F.A.M. Wiggerman.  I'm not sure I'd like a civilization in which you can't take a bath without worrying about lion-demons wandering in!  We couldn't find any other information, so if any of you find more intriguing information on our lion buddy, please share in the comments below.

They have even found their way into the gaming world.  At GM Oracle you can find out about their powers.

The upright rice stitch is a version of ordinary rice stitch and makes a pattern of diamonds on the surface.  The foundation stitch is an upright cross stitch, usually worked over 4 vertical threads and 4 horizontal threads. The corners are crossed by stitches over 2 on each horizontal and vertical thread.  This can be used as shading when varying the color used to make the short crossing stitches.  You can see stitch diagrams at Arts and Designs and in The Complete Stitch Encyclopedia by Jan Eaton.  Here, Julie has used the stitch in the Urmahlullu's turban.

We have new pictures from Jo, who has been faithfully stitching away!  Look at how far she's gotten now.... Great work, Jo!

As usual, click on the picture of the chart to be taken to our Freebie page, or click on "Freebies" in the sidebar.  Happy stitching!