A Visit to the Foundling Hospital and a Small Pilgrimage

While Becky is on holiday with her family, I'm taking a breather too, so am regaling you with yet another account from my travels to England a few years ago.  This was originally posted in my personal blog.

A quick tube trip to Russel Square brings you within a few blocks of this lovely little museum - and Bloomsbury is such a pleasant neighborhood to walk in. As I came through the door, I found my friend wating for me and off we went to discover the secrets of the Foundling Museum. On the ground floor is a history of the school, and there are many heart-wrenching mementos that the foundling's mothers left with them - just little shiny bits - a pearl button, a gaming chip - some little "treasure"! Those tugged at my heart strings more than anything else, I think!

In the 1700's, poor children who were not taken in to an institution like the Foundling Hospital or school would most likely be dead before their 5th birthday! Especially those in work houses - they were given dangerous and very unhealthy jobs and were literally worked to death! So when someone like Captain Coram came along he absolutely was saving their lives.

Hogarth's Gin Lane - a depiction of the harshness of life for the poor.

A look at the school menus seems pretty harsh, and apparently many of the children complained of being hungry, so no doubt the portions were small, but they were nutritious and much better than they'd ever get on their own, so you can only feel happy that the children found themselves in such good circumstances. Only about one third of all children who "applied" to be taken in were, as there were just so many children in need in London at those times. These were the lucky ones!  The children were housed, fed, clothed, cared for and educated - lucky indeed in those days!

After awhile, it became fashionable to do charitable works, and many people donated works of art and furnishings to the hospital, which wisely kept everything and put the pieces on display, charging admission.  Those pieces are still there, long after the children are gone.  The good works continue, though, as the Thomas Coram Foundation for Children continues to provide help to London's children.

On the second floor, there is a lot of beautiful artwork displayed (many of the gorgeous pieces were donated to help with the upkeep of the hospital, and the Foundling Museum was London's first public art gallery). Hogarth especially, donated a lot of his works.

The third floor has a Handel display - here was another benefactor - they even have his last will and testament, which includes his leaving the rights to The Messiah to them - the gift that keeps on giving. According to the guide at the entrance, we missed the concert (first Sunday of every month) by just a few days!

After lunch, my friend went on to the Tate and other pursuits, and I headed out to find the Kenilworth Hotel. Helene Hanff is one of my favorite authors, and her book "The Duchess of Bloomsbury Street" was largely written there as a journal of her first trip to London!

Her pure love of all things British shines through in this book, and her affection for the neighborhood in which she found herself was infectious. I decided I wanted to see the exact streets she was writing about, so off I went to find the corner of Great Russell Street and Bloomsbury Street 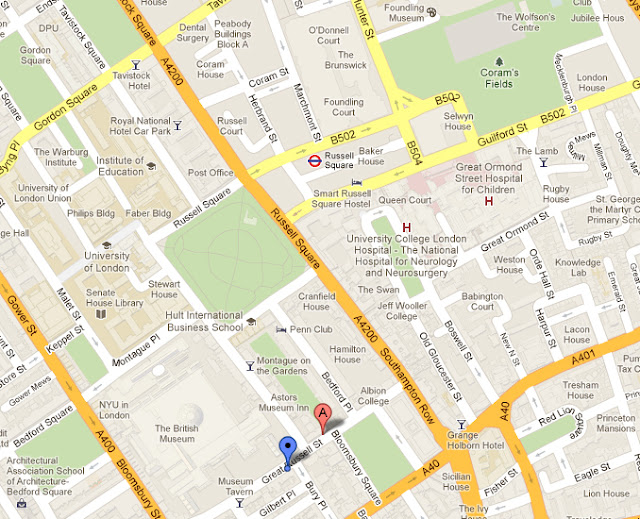 Finally I found it - the genteel, but down-at-the-heels hotel she stayed in is still there, but has been refurbished and is so fine she would never have been able to afford it today!(Helene was a "starving artist" - always made her living as a writer, but never made the kind of money that would allow this kind of luxury.)

Still - I can see the ghost of the place where she stayed and the same streets and outlook.  Had I known how close we were when we went to the British Museum, I'd have dragged Vern along!