Becky is away, and I'm playing hooky - but thought we'd treat you to a listing and description of a few places to have tea in London.  Maybe you're lucky enough to have been enjoying the Diamond Jubilee celebrations - or maybe you're heading out later this summer for the Olympic Games!  Either way - you'll need to know where to find that most genteel of British offerings - the afternoon tea.

Now, as long as I'm up here on my soapbox, let me bring up a couple of my pet peeves:  Please don't call the fancy tea served in the afternoon and comprised of finger sandwiches and tiny cakes "high tea".  High tea is what most of us in America call either dinner or supper, depending on where we live.  It's an early evening meal, served at the high table in your dining room or kitchen - quite substantial, often consisting of meat and potatoes.   Afternoon tea is a frothy affair and served on a low tea table, and earlier in the day.  It's original purpose was to "tide you over" until the evening meal, but it has become so large and intricate, that most of us agree you wouldn't be hungry in a couple of hours after one of these productions! 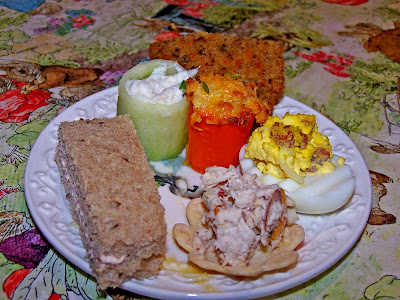 My second pet peeve is what is passing for Devonshire cream here in America.  Many restaurants provide whipped cream with their scones (which is fine, but don't call it Devonshire cream on your menus).  And the only one who can "make" it is a cow from Devon!  Mixing whipped cream with cream cheese or sour cream is probably what's left most Americans wondering what the fuss is all about?  Let me assure you - this tastes NOTHING like Devonshire cream.  The real thing is a wonderful, artery-clogging invention that I can't even begin to do justice to in a description.  It's creamy - the consistency of soft butter, slightly sweet, but clearly not because anyone put sugar in it - it's the quintessential ingredient in a cream tea and can make or break a tea experience!  (I know - I really should just let this go - but really....)  You can buy it in tiny jars here - you'll look at the price and gasp - but buy it - it goes a long way and it's just so wonderful.

Let's explore Knightsbridge and Belgravia a bit - first stop is Harrods - a good look around the food hall and you get an idea of what everyone raves about - there is everything under the sun to eat here - all beautifully presented.

We bought a bit of cheese and pate to have back at the flat, then wandered a bit through the store, then off to walk in the area. So many beautiful buildings here - many of them are foreign embassies! Now we're tired, and are just outside Harvey Nichols, which is also touted as having a great food hall, so we check it out. I think I might like this one a bit better, even.

So many gourmet delights - and we decide to have little rest and a cup of tea in one of the cafes.

Then we find the tube and head off to Hyde Park Corner - and promptly get lost looking for Park Lane (which you would hardly be able to credit, if you could see the map, but we did it!)

Finally find the right way to go and head off down Park Lane beside the park (naturally) and go by so many grand hotels, until we find The Dorchester. We have decided that our first afternoon tea will pull out all the stops! We are ushered into The Promenade – a golden-glow of a room with much marble and gilt! 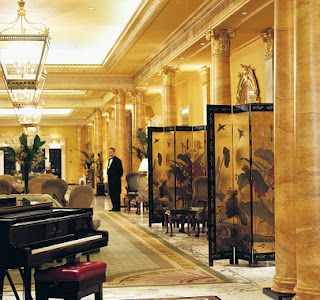 The waiters are all in tuxedos and the seats are all plush banquettes with pleasingly-plumped-pillows! Sink back against them and prepare to be dazzled. While there is a fairly limited selection of teas, there are a few each of black, green and herbal teas to choose from, and they are all served as loose-leaf teas. I choose Paris – a lovely scented black tea with hints of caramel. 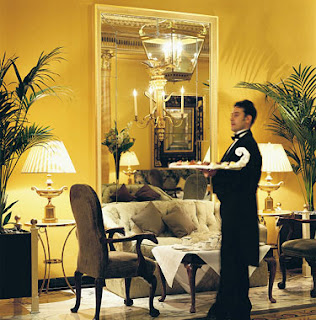 I love an afternoon tea that pays as much attention to the savories as the sweets, and this one does itself proud! Five different types of finger sandwiches are offered and offered and offered again, so that only when you are really ready to move on do the sweets begin to arrive. Of course, they are heralded by the presence of the hot scones, two kinds of preserves and clotted cream. What a delight. Next came a dizzying array of tea cakes and confections. Finally, after several hours of pampering, we were ready to head home. Back down the street to the Hyde Park Corner tube station, and home we come.

Saturday morning, we found that the rainy weather had cleared and we had a pretty, sunny day. So we set off for a little bit of shopping and then some time in the park – this time Kensington Park (our own neighborhood park and the site of the Kensington Palace). This was another residence for royal families through the times, and the most recent resident was Princess Diana. You can tour the state rooms, and there's an exhibit of her formal gowns there, but we opted to spend the day in the gardens. The grounds are lovely, and on a sunny afternoon, a perfect place to people watch and to feel a little apart from the crowded streets of London.


As we toured past some of the other grand homes in the area (many of these were also embassies), we found ourselves wandering toward the Orangery. This is a wonderful restaurant in the park. We expected it to be very informal, and it was, in that people certainly dropped in after wandering about in the park in their Saturday rambling clothes, but it is an elegant, airy atmosphere. And one where afternoon tea is served. So, of course, we partook! This was less fancy, but still delicious – cucumber sandwiches, scones and clotted cream and a wonderful orange sponge cake made up the food selections, and there were a few teas to choose from. The shadows got long as we whiled away a couple of hours in this busy, bright spot! 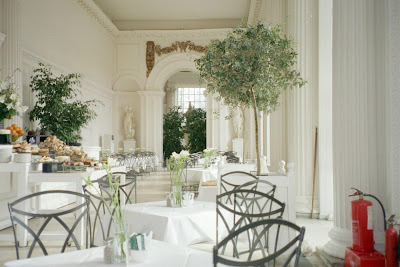 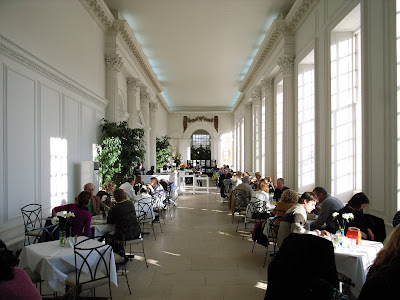 The following week, we decided to find Brown's Hotel. I'd been reading about this hotel - supposed to be "the best afternoon tea in London". It will have to go some to beat the Dorchester!

We found the lovely old hotel in Mayfair - and headed into the beautifully appointed room - sumptuous!

We were ushered to our table, and ordered our teas (Splendid Oolong for me, and Brown's Afternoon Blend for Vern). A lovely three-tiered tray is brought with wonderful sandwiches on the bottom tier, scones on the top and several cakes and tarts in the middle. A generous helping of clotted cream and strawberry jam with the scones, of course.

The sandwiches were terrific - and a second helping was brought - and a third offered! More scones were also offered, and after we'd started to make some headway into the cakes, a trolley was brought around to offer more cake - a wonderful cream/sponge cake or a fruit-cake. We sampled the sponge...

We left two hours later absolutely sated. As we ate and chatted, a pianist played old standards - we had a lovely afternoon listening to him "tickle the ivories". About 5 p.m., we pulled ourselves away and trundled home again.

Now - you can find afternoon tea almost anywhere in London - it's not hard - but these were the very best I found.  It's not inexpensive - well, the Orangery was, actually, quite affordable, and more of a snack than the hotel teas.  The thing was, at the hotels - this was a lot of food - so you could afford to blow the whole day's budget on that meal - you wouldn't be wanting much else all day long!  So now tell me - where have you had the BEST afternoon tea?