Who Do You Think You Are? The Queen of Sheba? 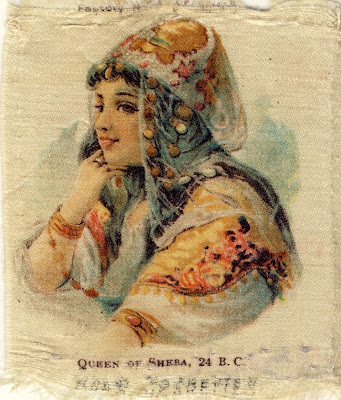 Queen of Sheba on a Cigarette Silk 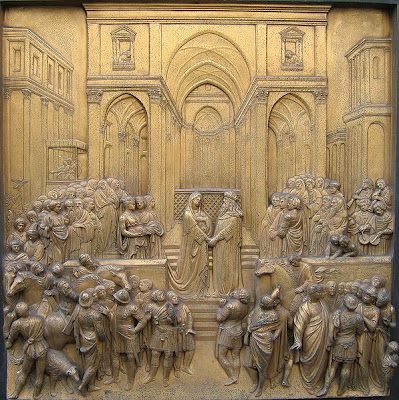 And what about the women stitching these beautiful needlework portrayals of the Queen of Sheba, were they showing their pro-feminist sides? Sheba offers a defense of material goods that is also a defense of needlework itself at a time when some refer to needlework as a frivolous use of time and materials.  They equally may have been celebrating contemporary forms of female power in domesticity, ownership, or gift-giving that they experienced themselves closer to home. 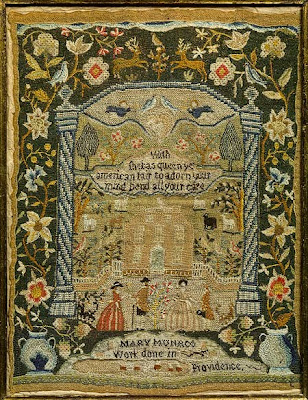 Here are two articles to help you decide: 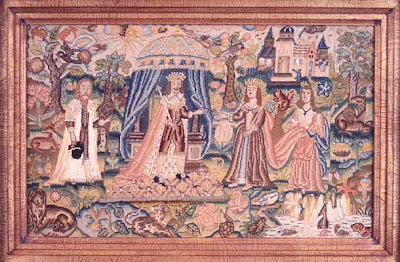 Did the seventeenth century woman stitching the various Queens of Sheba find her fascinating beyond the biblical interpretations?

She was born and died in the 10th century BC., her birthplace Sheba, now Yemen or Ethiopia. The Queen of Sheba was best known as the wealthy Queen who tested Solomon. 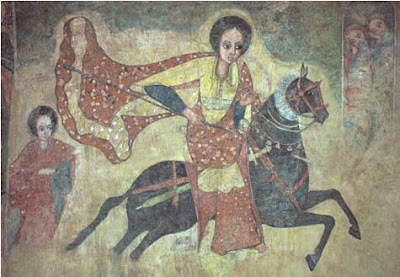 The name she is called and the location from which she comes changes depending on whose interpretation you might read.  The Queen's 10th century BC visit to the grand court of Solomon, King of Israel and son of the legendary Goliathslayer David, however, is well-attested in three major ancient sources: the Biblical Old Testament, the Islamic Qu'ran, and the Ethiopian Kebra Nagast (Glory of the Kings). These three perspectives on the Queen meld to create a picture of one of the relatively rare, powerful female monarchs of the ancient world.

So many beautiful depictions of the Queen of Sheba are found in various forms of needlework. Canvas pictorials, stumpwork, mirror surrounds, caskets and they are found in English and American interpretations. 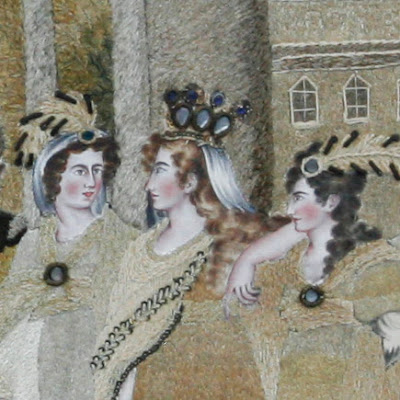 You will see several images we have found for you to view here. 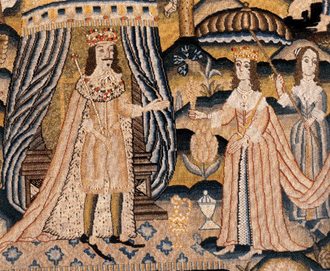 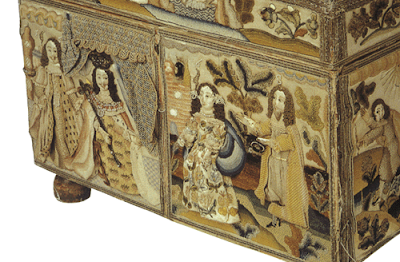 You may want to indulge in some Queen of Sheba cake.  It is nice to include all of our senses on these journeys.
THE QUEEN OF SHEBA (REINE DE SABA) CAKE
(The Way to Cook by Julia Child, Knopf, 1989) 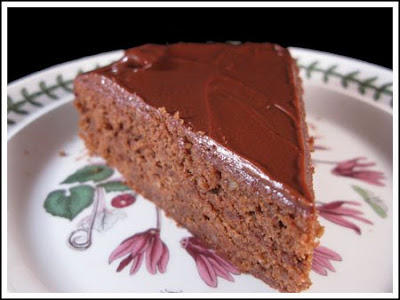 Julia says:
A very special cake of rum, almonds, butter and chocolate that is somewhat moist in the center-it literally melts in the mouth...Like most French cakes, it is only an inch and a half high, which makes it easy to serve.
3 oz. bittersweet chocolate
1 oz. unsweetened chocolate
2 Tablespoons strong coffee
1 stick unsweetened butter, softened
1/2 cup sugar
3 egg yolks
The egg whites:
3 egg whites (a scant 1/2 cup)
1/4 teaspoon cream of tartar
a pinch of salt
2 Tablespoons sugar
1/3 cup blanched almonds ground together with 2 tablespoons sugar in the food processor
1/4 teaspoon almond extract
1/2 cup cake flour (scooped and leveled with the back of a knife)
1. Preheat the oven to 325F and set the rack in the lower middle of the oven.
2. Butter and flour an 8 inch round cake pan.
3. Melt the chocolate in the top of a double boiler. When melted, remove from the heat, but keep warm.
4. Cream butter and sugar together with a mixer. When soft and fluffy, add the sugar and beat 1 minute. Add the egg yolks, and beat thoroughly.
5. In a separate bowl, beat the egg whites until foamy. Add the cream of tartar and continue beating until soft peaks form. Gradually beat in the 2 Tablespoons of sugar and continue until you have stiff, shiny peaks.
6. All at once, blend the warm, smoothly melted chocolate and the coffee into the yolk mixture. Stir in the almonds and almond extract. Stir one-quarter of the egg-white mixture into the chocolate mixture.
7. Scoop the rest of the whites over the chocolate mixture and, alternating with sprinkles of the flour, rapidly and delicately fold in the egg whites.
8. Turn the batter into the prepared pan, tilting it in all directions to run the batter up to the rim all around the pan, and set it in the preheated oven.
9. Bake for 25 minutes, or until the cake has puffed to the top of the pan and a toothpick inserted into the cake 2-3 inches from the edge of the pan comes out clean. The center should still be slightly jiggly.
10. Cool the pan on a rack for 15 minutes, and then unmold the cake onto the rack (by placing the rack atop the pan, and flipping both over). Let cool completely-2 hours-before storing or, if desired, icing.
SOFT CHOCOLATE ICING
2 ounces semisweet chocolate
1 ounce unsweetened chocolate
1-1/2 Tablespoons strong coffee or rum
a pinch of salt
6 Tablespoons unsalted butter, softened
1. Melt the chocolate with the coffee or rum in a double boiler. Bring the water in the lower pan to a simmer, then remove from heat, add the chocolate and coffee or rum to the top pan, and cover the top pan. After 5 minutes, the chocolate should be smoothly melted. If not, remove the top (chocolate) pan, turn the heat back on to bring the water back up to a simmer under a lower pan, and repeat the process.
2. When the chocolate is smoothly melted, beat in the salt and the butter, one Tablespoon at a time. Put the chocolate pan over a pan of cold water, and continue to beat until cool and firm enough to spread.
3. Turn the icing over the top of the cake, and spread it over the top and sides.
It is said that little has been verified about the Queen of Sheba's life. So I am sharing just bits and pieces I have found mostly on the internet with you and hope that once again, this will whet your appetite to seek further information regarding the Queen of Sheba in needlework and history and that it will take you on an armchair journey to other lands and times. I am also including links to the sources some used, some not, that can help you begin that journey.
http://www.isidore-of-seville.com/sheba/5.html
http://www.witneyantiques.com/flat.items/embroidery5lg.htm
http://www.pbs.org/wgbh/roadshow/archive/200801A14.html
http://www.pbs.org/wgbh/roadshow/archive/200801A14.html
http://vintagelacemaking.com/old_lace/old_embroidery.html
http://www.oldandsold.com/articles01/article895.shtml
http://www.churchtimes.co.uk/content.asp?id=68668
http://belovedlinens.net/samplers/usamplers18-2.html
http://www.metmuseum.org/toah/hd/need/hd_need.htm
The Search for the Queen of Sheba in six parts:
Becky
Posted by Julie at 7:20 PM