What do Honus Wagner, The Queen of Prussia and the Geranium Have in Common? 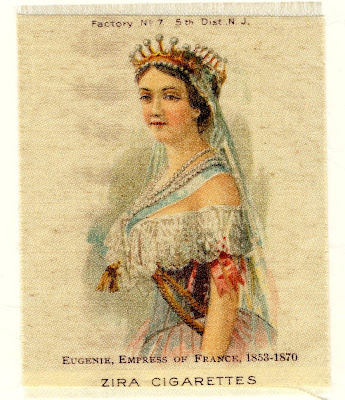 They were all featured in tobacco premiums early in the 20th Century!   We all know about baseball cards (which appeared in cigarette packages as well as candy and bubblegum).  Last week's post on the Queen of Sheba sent me scrambling to find my small collection of cigarette silks, as I was sure I had one of her, and sure enough! As I looked through these lovely pieces, I marveled at the early ingenuity of tobacco marketing. It hearkens back to a day when you would open your box of laundry soap to find a dishtowel rolled up inside, or you went to the movies once a week because you were collecting the dishes they gave away with the 35 cent ticket! Is it possible to have nostalgia for a time you didn't actually know? All I really know about these things is what I've seen in movies, but I have learned a little about cigarette silks.
Savvy tobacco marketers decided to target women when they noticed that women were saving cigar ribbons to use in their needlework.  There are quilts made up entirely of different cigar ribbons - these silk ribbons were actually used to tie the cigars in a package together and no thought had been given to using that ribbon as a "premium".  But the tobacco companies were quick to jump on the bandwagon and began to include small pieces of fabric in each cigarette package specifically to attract women customers.  These pieces of "silk" (they were actually made of a lot of different things - a few silk, some cotton, some a combination in a satin finish) were prized for crazy quilts which were very popular at the time.  They were printed on a woven fabric.  While some were monochrome, such as my Actress series, some were in glorious color, such as the Queens in my collection. 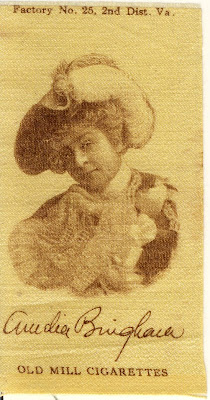 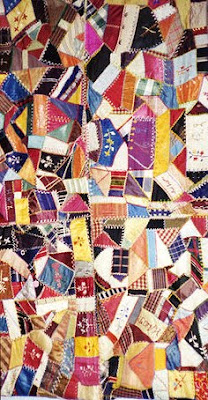 Small scraps and vignettes are perfectly suited to this wonderful folk art, and the cigarette silks were hugely popular!  I bought mine for the same reason, though of course, my crazy quilt is yet to be made...  But they are perfect for this purpose!
They appeared in cigarettes in the UK and the US from the late Victorian era into the late 1920's.  The subject matter was very varied - you could collect almost anything, it seemed, from photos of popular actresses of the time, to gorgeous floral prints to artistic renderings of famous Indian Chiefs.  There were military insignia, college seals - if you could reproduce it on a small piece of fabric, it was there! 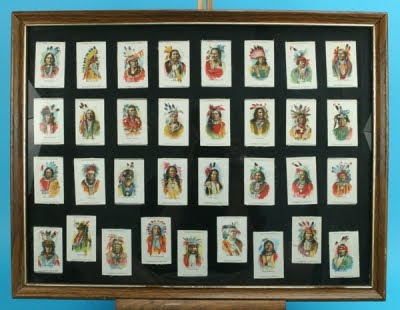 Today, some collectors choose to simply display the silks, as above, but there are still some who use them in needlework, and you can see pictures of people's handiwork on their blogs...
The pictures on these pieces are absolutely beautiful in some cases, and the history is fascinating to me...

Next time you're browsing on eBay, take a look - there are lots to choose from, and they can be surprisingly affordable.  And as collections go, they don't take up much space!
Julie
Posted by Julie at 6:35 AM