Remembering Those We Loved

As Memorial Day approaches, our thoughts go to those who not only served our country and were lost at War, but to those close to us whom we have lost. Last summer my nephew, Adam Beatty, lost his long hard battle with a rare form of cancer.  It was hard on the family to lose someone so young, but Adam taught us all how to handle his illness with strength and dignity and to know that he didn't give up the fight until he was ready.  So now I would like to take some things important to Adam and his family and create a memorial sampler to honor his life.
In preparing for this, I started looking at various mourning samplers and art to see what type of layout and design I might like to use in this piece.  I thought it might make for an interesting blog post since we are about to celebrate Memorial Day here in the States. So I will share some of my research and thoughts with you and maybe you can share with us ideas you have used in creating memorial or family samplers special to you. I know I enjoy hearing others' ideas and sometimes it helps me in creating special designs of my own as well.

How do we commemorate those we have lost while allowing ourselves to mourn and remember those special to us?  Mourning art has been around for a very long time, and was especially prevalent during Victorian times. People seemed to sentimentalize death.  Hair jewelry - rings, necklaces and brooches were created from the hair of lost loved ones. 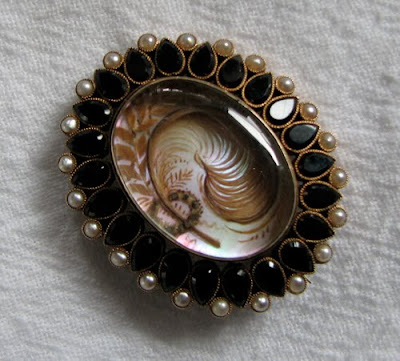 These I found to be very sentimental, whereas the hair-work (large pieces of hair sculpture in the shape of flower arrangements mounted and displayed in front parlors) I found a bit grotesque. 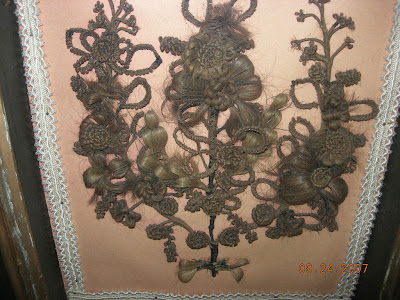 One representation I found unique was a piece with human hair buttonhole-stitched around the silhouette of someone who had passed on. 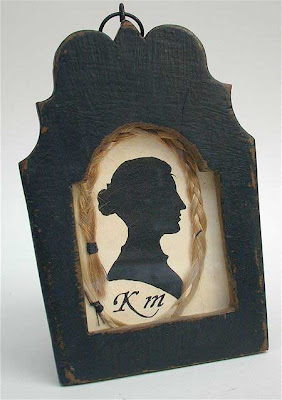 Schoolgirls produced a great many silk-work embroidered pieces - often stitched over a water-colored background that was painted by an itinerant painter and then mounted in black and gold eglomisé mats and fine gold leaf frames. 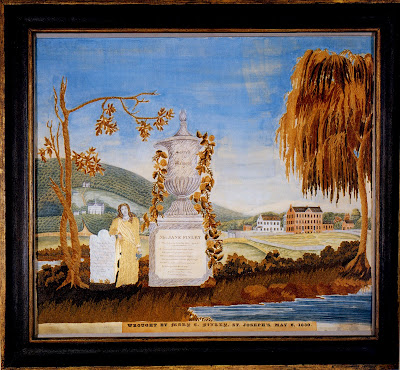 They were hung in parlors as proof of the young ladies' education and the families' fashionably proper attitude. There were also memorial paintings; one that caught my attention was of a house with no roof, depicting the end of the family. The Pennsylvania Germans elaborately painted Fraktur birth and death certificates and other family registers.   These beautifully painted and lettered certificates have been handed down in families for generations. 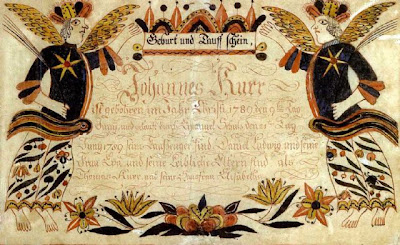 The mourning scene was not naïve, not frivolous, not morbid. It began as a sophisticated expression of death in the ornamental style of the late eighteenth century. Memorial Samplers really came into popularity with the death of George Washington in December of 1799. 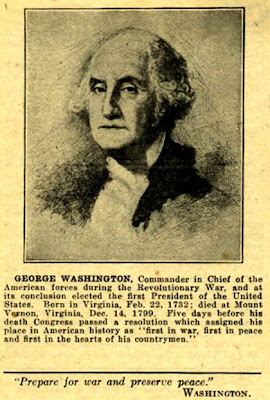 Greek Revival influence from pottery and engravings is found on the memorial samplers that become the fashion, featuring the willow and cypress trees predominantly. Julie and I had the opportunity to attend a symposium at Colonial Williamsburg in 2007 where we enjoyed many lectures and an exhibit entitled "Remember Me When This you See": Embroidered and Painted Arts of the New Republic.

Some of the other symbols used on memorial samplers and embroideries that were discussed in the Williamsburg symposium are:
Gardens: Eden, resurrection 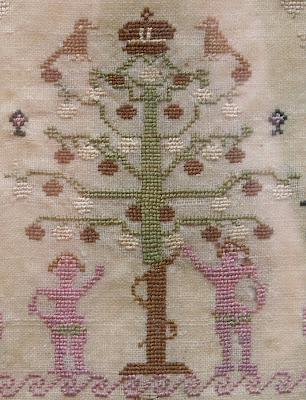 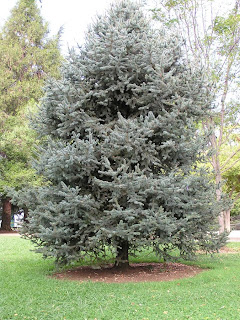 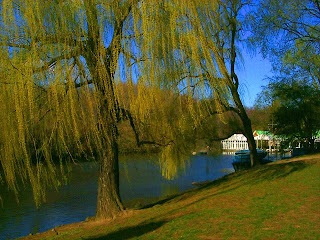 White: Color of hope, Christian color of purity
Urn: The deceased
Church: The coming of the Holy Father
Eagle: Flying in the sky, all-seeing eye of god

Garden iconography is elaborate and complex at this time and you can see so much of it reflected in the romantic depictions of the memorial samplers.  A strong biblical influence is also seen in these areas. 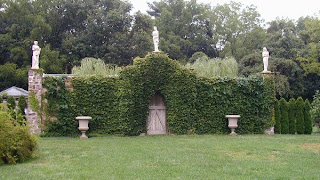 The stitches predominantly used on the mourning embroideries were:

Seed or dot; long and short; stem; laid; couching; outline; satin; fly or Y; French knot; and loose S or loop. Also chenille and broad stitches - sweeping couched lines that covered masses of ground easily.  Most of the mourning embroideries were done under the instruction of a teacher. Sometimes an art teacher was paid extra to draw an embroidery design for a student, and as mentioned above, sometimes an itinerant painter painted areas of the background, such a sky and water for the mourning embroidery. Sometimes faces on the figures were painted on paper and attached to the embroidery. These were not the first embroideries of a young hand, but many times a final piece to show what accomplishments had been achieved and were placed in the parlor, a place of honor.

It is interesting to read about the culture at this time and the other traditions regarding mourning properly: draping the home with black crepe and wearing the proper attire for the proper amount of time - honoring the memory of a loved one properly.  In some cases, this extended to having servants spread straw on the cobbled streets outside a home in town, so as not to disturb the mourning family with noisy hoof-beats as carriages passed.

I have been thinking of what I want to include on a memorial sampler for Adam's mother. She doesn't know I have this plan in mind and I know it will take me longer than I would like to create and stitch it. But the length of time does not matter, it is what is put into the sampler that does. I want it to be representative of Adam and his family, so I will include some things that were important to him to personalize the symbolism in it. I will include things from his heritage and of course dates and initials; he loved his big trucks and his last was a Jeep Rubicon, so there will be a jeep in the proper color; the pretty kitty, who would keep him company during those long hours of silent pain, waiting for a good day to arrive.  I have photos so that I can hopefully capture his kitty's coloring and make it personal to him in this way as well. I have also found that the cat symbolizes the guardian of the gate of the other world in Scottish symbolism, 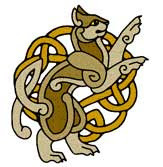 so this is fits well; his garden that the family has planted in his memory, so we can continue to enjoy time with Adam; possibly Mount Rainier, it held special meaning for him. There will be some traditional symbols: the cross for his religious beliefs that kept him strong; the heart, or double heart that was used in Scottish symbolism for his family's love for him. 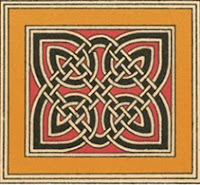 His father's heritage is British, Cherokee, Scottish and Slovenian. His mother is Chinese. So I have searched for symbols and their meanings in those heritages that will fit into the sampler and serve as special meaning.  Here is some of what might be included.  Cherokee: Cedar Tree, symbolized by the colors red and white - once carried the honored dead; the owl was also a symbol of death and an important symbol because it did not fall asleep during the seven days of creation; the color red is important throughout Adam's heritage - Cherokee, Chinese, Scotch, Slovenian and British, so red will surely be included.  Slovenian: Red Carnation is the national flower; the honeybee is also important. With his garden these will work well. British: the Red Rose is the national flower; and the crown for royalty. Chinese: I will include the boar, which is his Chinese zodiac sign for 1983 - honest and frank and has a strong heart; I think also there will be a Chinese character, but I haven't decided which one yet. So you can see there is a lot to fit together into the puzzle of a sampler for my nephew's memorial. It may be awhile, but hopefully I will have something to share on the blog in a few months of what this has become through the threads from my heart.

There, again, is so much that I have not shared here regarding this area of needlework and so many resources in the many books on the shelves, that I have not listed. I have tried to list some that you might not be aware of here.  I hope this will give you a taste of another area of embroidery that you will seek more information about and one day you may decide to "Honor the Memory" of someone you have loved and lost as well.


Bibliography and sites with information to further your interest in memorial samplers and the arts:

Mourning Becomes America: Mourning Art in the New Nation
An exhibition and catalogue researched and prepared by Anita Schorsch

Stories in Stone A Field Guide To Cemetery Symbolism and Iconography by Douglas Keister - Many of these same motifs are used in embroidery. It has a great list of symbolism and photos of headstone artwork.

A Spiderweb for Luck: Symbols & Motifs Used in Crazy Quilting by Dee Stark - Many of the same motifs are used in embroidery as well as in crazy quilt and this also gives some historical information on symbolism and shows some embroidered examples.

Epitaphs To Remember, Remarkable Inscriptions from New England Gravestones by Janet Greene  - Good verses to use on embroideries and memorial samplers with an historic feel - also some to chuckle at.

Personal notes taken from the Colonial Williamsburg symposium: "Remember Me When This you See": Embroidered and Painted Arts of the New Republic.

"The death of George Washington in December of 1799 sparked a national vogue for public mourning that endured for decades. In keeping with this, young ladies attending schools, academies and seminaries worked stylish silk embroidered and watercolored pictures dedicated to departed family members. After they were framed with black and gold eglomisé mats and fine gold leaf frames, they were hung in parlours as proof of the young ladies' education and the families' fashionably proper attitude."


http://www.artofmourning.com/art.html
Many examples of mourning samplers and hairwork.....info. on mourning needlework samplers.  Also a section on symbolism