The Mesdames Buck and deVries-Wong courteously invite you to join with us in an undertaking most fanciful.  We will venture into the past to investigate the everyday life of a needlework teacher and spinster lady in America during the beginnings of our country!  While Miss Pandora Boxworth is completely fictional, we will endeavor to portray early America and the life of the schoolmistress and sewing instructor as realistically as possible.  We had a lot of fun imagining Pandora's situation in life and work, and hope you will enjoy reading about her!

Her story will appear, from time to time on the blog - interspersed with our own stories and studies in the sampler world.   Today is your first installment.... 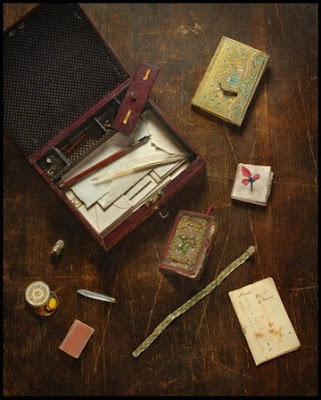 we have found the private letters and journal of a lady who lived in America a long time ago - in fact, she was there when we became the United States of America!  Through her letters and journal-entries, we have discovered just what she was thinking of and the life she lived during those historic times!  (yes, we'll share them with you!)

Miss Pandora Boxworth arrived in Boston in November, 1763, having sailed from Glasgow on the Diligence, helmed by Captain Charles Robison.  It was a rough journey, but Dora (for that is what her friends called her) was an adventurous soul who looked forward to her life in America as the wife of a ship's captain!  Dora was engaged to a young man who had just been given his first ship to command - and she was very excited to meet him in Boston, where they were to be married that very day!  Unfortunately, his full name is lost to time, but we have the one letter that Dora must have held very dear to her heart on that April day, and perhaps the rest of the days of her life!  It was carefully preserved in a place of honor in a secret compartment in the box!

Here is the letter:  (if you can't read the letter easily, click on the picture to enlarge it). 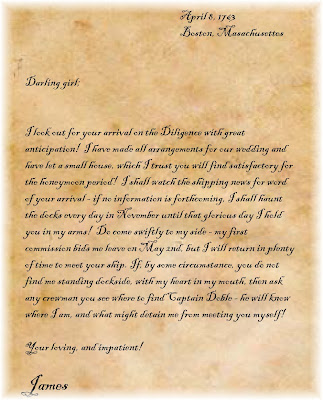 And yet - all evidence from the journal and other letters, indicate that Pandora Boxworth remained single all the days of her life!  What could have happened to James?  And why was Pandora reduced to purchasing the following advertisement in the Boston newspapers early in 1764?

(if you can't read the advertisement easily, click on the picture to enlarge it). 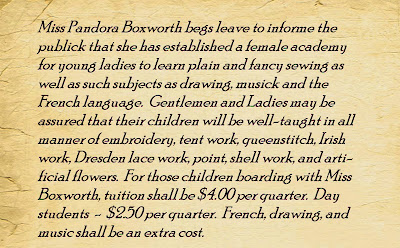 I wonder how many students she had?  And what happened to James?
I guess we'll have to read on....
Posted by Julie at 5:24 PM