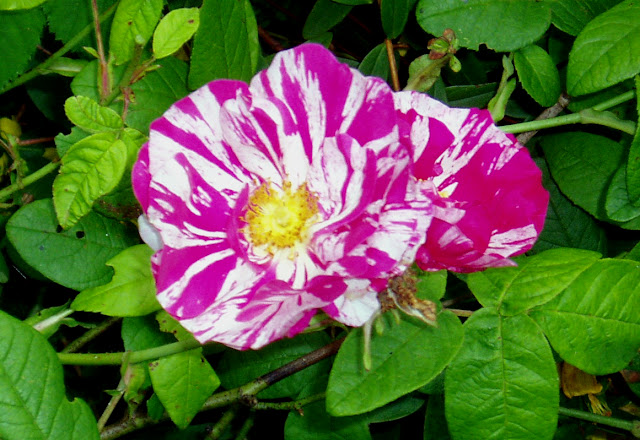 Rosa Mundi is a beautiful rose that appears on many of the Norfolk samplers featured in the book Imitation and Improvement: The Norfolk Sampler Tradition by Joanne Martin Lukacher.

Joanne has this to say about the rosa mundi:

Within the typical floral border of Norfolk samplers can be seen the ancient rosa mundi, red edged and striped white roses (reputed to have originated in Norfolk), prominent and distinctive rose buds, violas, honeysuckle, columbine, forget-me-nots, carnations and morning glories.  A 17th-century needlework depiction of the rosa mundi in conjunction with the arms of the City of Norwich can be seen on a turkeywork pillow in the collection of Carrow House in Norwich.

In his The History of the Worthies of England, Thomas Fuller says “…and the rose of roses (rosa mundi) had its first being in this city.” (Norwich)

Rosa Mundi was first described in 1583, and according to 'The Garden Book' of Sir Thomas Hanmer (published in England in 1659) it was originally found in Norfolk '..upon a branch of the common red rose...' . However there is an earlier legend which states that the ‘Rosa Mundi’ was named after Rosa­mund Clifford, the mistress of King Henry II who reigned as England’s monarch from 1154 to 1189. Rosamund Clifford (1150-1176), also known as the "The Fair Rosamund" or "Rose of the World", was the long-time mistress of King Henry II. Henry was forced to marry Princess Eleanor who, jealous of her husbands relationship with the fair Rosamund, is said to have had her murdered by poison.

After her death, Henry and Rosamund's family paid for a tomb at Godstow Nunnery near Oxford

and put an endowment in place for it to be attended by nuns who were instructed to place Rosa Mundi flowers upon it on the anniversary of her death. This became a popular local shrine until 1191 (two years after Henry died) until St. Hugh of Avalon - Bishop of Lincoln happened to visit Godstow Nunnery and saw Rosumund's tomb right in front of the high altar. It was covered with rose flowers and lit candles, and upon calling Rosamund a harlot, ordered her remains to be removed from the church. Her tomb was taken to the cemetery at the nuns' chapter house close by but it eventually became destroyed during the 'Dissolution of the Monasteries' between 1536 and 1540.

The rosa mundi was one of the prominent flowers found on the Norfolk Samplers. Their beautiful strong contrasting colors of red, pink and white that giving a striped affect.

You see this flower in the artwork of the day as well.  Botany was a popular hobby of the wealthy, developing new graphs from the plants in their greenhouses and through trade bringing in new species from lands afar.

The rosa mundi is not only found on the samplers from Norfolk, but on the shawls that developed in the area as well that they made to emulate those shawls form the East.

Below are some of the interesting stories  and information I have found regarding the rosa mundi.

Rosa Mundi is the Summer Solstice Festival of Our Mother God. It is the first High Feast of the Mother Half of the year. It represents the southern pole of the World Axis and the Southern Gate of Heaven.

The whole season of Rosa Mundi (which can vary in length according to local custom but always covers at least several days following the festival and some hold it to last until the Golden Festival of Hiranya) is known as the Fire and Rose season. The two themes, obviously, are fire and roses, and it is not coincidental that in various forms of the Sleeping Beauty story the sleeping Princess may be guarded by thorny briar roses (the Sleeping Beauty's name is Briar Rose) or by fire (cf, Brünnhilde sleeping on the fire-girt rock).

The secret behind all this is that the Sleeping Beauty is the Spirit herself, the Guarded treasure. Fire and the Rose are ambiguous in this context, in that both are Treasures ("fire-worship" is very important in Aristasia, note for example the great Fire Temples, like that at Rayapurh) and both are Guardians - even the lovely Rose with her thorns.

So, ultimately the joyous Fire and Rose season, with its flowers and its fireworks - like the beautiful fairy tale - is about the soul's quest for the Spirit, for the Temple of the Heart whose form is the form of a Rose. For the sacred Rose whose petals are pure fire.

Miss Darcy's Library has a fresh perspective:
The rosa mundi, a fresh pink and white candy-striped rose that has apparently been around since the twelfth century, featured prominently. And this is where the real search began – for the phrase rosa mundi teased and tugged at my memory. Though I was never a proficient Latin scholar (and isn’t that an understatement!), it was nevertheless easily translated as “rose of the world”. I seemed to recall it being connected with several poems by Yeats, and possibly also to religion, but more than that I could not remember.

It seems that long before the rose became associated with Venus/Aphrodite, it was the emblem of the goddess Isis. The priestesses of the Isian cult used roses extensively in their rites and statues of the goddess often depicted her holding a rose in one hand, while garlands and bouquets of flowers, including roses, were scattered by participants in Isian festivals.

One of the most important of these festivals was the Isidis Navigatum, or blessing of the fleets. During the Greco-Roman period, Isis became the patroness of sailors and ships. It is thought that the tradition of adding carved female figureheads to the prows of ships dates back to this period and to the wish to invoke the goddess’s protection before setting out to sea. The Isidis Navigatum was celebrated in all the ports of Ancient Greece, in the harbours of Rome, on the shores of Greco-Roman Egypt, and throughout the Roman Empire, all the way up to the Seine (the Parisii, the tribe of Gauls living in the actual region of Paris, were wealthy and powerful merchants and ship-owners devoted to the cult of Isis, as attested by the discovery in the eighteenth century of a statue of the goddess in the church of St Germain-des-Prés; the ship which still appears at the centre of the city’s coat of arms is also a direct reference to these ancient navigators). Thus the phrase rosa mundi could stem from the wide-spread cult of Isis and all its attendant associations with navigation and journeys.

And Universal Quest has another view to teach us:
July 3rd is Rosa Mundi - Rose of the World - day in the Palestinian Christian Calendar. This day has its roots in Rosicrucian - http://www.rosicrucian.org/ - mythology (a 17th century secret society rooted in Christian mysticism that has influenced many aspects of modern life including Freemasonry. See the definition of Rosicrucianism at the Wikipedia site - http://en.wikipedia.org/wiki/Rosicrucian.) Esoterically, the Rose is a symbol of wisdom and knowledge with the Rose of the World as a synonym for Pax Cultura, peace through culture. Daniil Andreev, the Russian mystic and poet, saw Rose of the World as a sign of  the future age of Mother of the World, a New spiritual and idealized Age of Aquarius. So now, when you look at a red rose you can see it as a meditation on an ideal new age to come and the dream of world peace and a new awakening.

Mirror of Isis says:
Of all the flowers, the rose is a singular example of a natural form that has been included in the symbolism of many cultures, spiritual traditions and folklore throughout the centuries. This flower has been intricately connected to our ideas of love and beauty and as such has enjoyed an association with several Goddesses, among them are Inanna, Ishtar, Aphrodite, Venus, Lakshmi, Chloris, Cybele, Flora, Demeter, Astarte, Aurora, and Hecate. The rose also has associations with a few Gods, Cupid, Dionysius, Eros, Mars and Bacchus.

Rosa Mundi (recorded as far back as the fifteenth century) Type: Gallica. The color is pale pink to white with deep Rose-pink stripes overlaid. Its fragrance has been described as quite intense to moderately strong.

A climbing rose, with an Isian connection!

No matter what, the rosa mundi is a beautiful, unusual rose which is made all the more endearing because it has become associated with the Norfolk Sampler Tradition!

Such exciting news!  Joanne Martin Lukacher was interviewed for a Vassar Library blog podcast, and it's now available for all to enjoy!  This is a lovely interview, which gives you great insight into the research that's gone into Ms. Lukacher's book, and the knowledge she has of this fascinating topic!  Click on this link, then click on "Listen" to hear the interview.
http://library-cafe.blogspot.com/2013/03/joanne-martin-lukacher.html 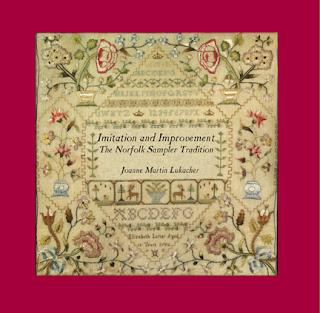 This new publication is full of lovely deer that you will enjoy as well as many other beautiful motifs found typically on the Norfolk Samplers.  If you haven’t purchased your copy yet, you may want to proceed to our web site or one of the retailers currently carrying this edition and add it to your needlework library.  Suggested retail is $92.95.  If you are in a guild and make a group purchase of 8 or more copies, we are still offering the special guild price of 20% off the cover price plus shipping. Which will bring the price down to $74.36 plus shipping.  For guild purchases, just email us at inthecompanyoffriends@gmail.com and we will figure the cost of shipping and total the order for you.

Joanne is also available for talks and book signings and we would be happy to put you in touch with her so that you can schedule this for your group or shop. 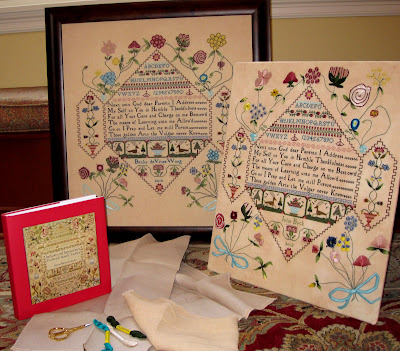 We have some special products designed from the sampler we created in the style of the Norfolk sampler which you receive the chart for as well in the book.  You can find these products at our web site as well. Keep watching as we will be adding new products very soon.

In the US:
3 Stitches in Spring, TX
Acorns and Threads in Portland, OR
Attic Needlework in Mesa, AZ
Cecilia's Samplers in Branson, MO
The Mad Samplar in Yadkinville, NC
Needle in a Haystack in Alameda, CA
The Scarlet Letter in Sullivan, WI
Shepherd's Bush in Ogden, UT
The Silver Needle in Tulsa, OK
Stitcher's Stash in Brookville, PA

In the UK:
The Sampler Guild

On Sunday, March 24th, Joanne Martin Lukacher will be speaking at the Marshall House in Vancouver, WA.  Stop by if you are in the area, but do please rsvp to jmpknit@msn.com.  The event is free, but since seating is limited, a reservation is definitely required.

Joanne will also be speaking at the first ever Penn Dry Goods Market Show and Sale in Pennsylvania!  May 17 and 18th, this wonderful event is coming to the Schwenkfelder Library and Heritage Center!  Take a look at their lineup on the Schwenkfelder website.  We'll be there and would love to see you! 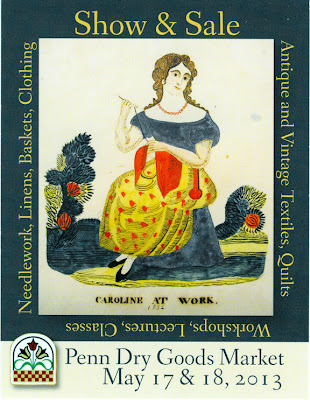