Here we are at our last letter "Z", Zombees and the Zig Zag Stitch! Julie has done a great job of creating  a Dark Alphabet of creepy characters for you all to enjoy stitching.  We have entertained you the best we could with snippets of history and unnecessary information on each of the letters from bathroom protectors to monsters galore.  Hopefully none were too frightening and all in all a bit of fun!   Our original thought was to honor the memory of Lisa Roswell, of the Primitive Needle, whose quirky Hallowe'en-type charts we loved.  Lisa is much missed in the stitching world - her sense of humor and whimsy are just what's needed in this complicated world.  We hope she would be pleased with our small offering, and we thank you all for continuing to play with us as we take our journey here at a Note of Friendship.

Now if I remember right there was the promise of some prizes for the completion of this piece!   Jo, who has been keeping up with all the letters, has offered a challenge to everyone that if they finish stitching the full alphabet before she does, she has a prize for them, and so do we!  So we're down to our last chance on that!  A much easier challenge - if you send us a photo of your finished stitching before Julie finishes stitching (hint - Julie is on "H"), you will win a prize from In the Company of Friends!  So come on - show us your Kelpies and your Zombees! 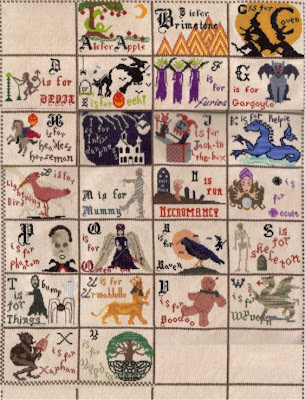 Here is a photo of Jo's work so far - I've "knitted some photos together" for this view - doesn't it look great?

Zombie (Haitian Creole: zonbi; North Mbundu: nzumbe) is a term used to denote an animated corpse brought back to life by mystical means, such as witchcraft. The term is often figuratively applied to describe a hypnotized person bereft of consciousness and self-awareness, yet ambulant and able to respond to surrounding stimuli. Since the late 19th century, zombies have acquired notable popularity, especially in North American and European folklore.

In modern times, the term "zombie" has been applied to an undead being in horror fiction, largely drawn from George A. Romero's 1968 film Night of the Living Dead. They have appeared as plot devices in various books, films and in television shows.

The figure of the zombie has appeared several times in fantasy themed fiction and entertainment, as early as the 1929 novel The Magic Island by William Seabrook. Time claimed that the book "introduced 'zombi' into U.S. speech". In 1932, Victor Halperin directed White Zombie, a horror film starring Bela Lugosi. This film, capitalizing on the same voodoo zombie themes as Seabrook's book of three years prior, is often regarded as the first legitimate zombie film ever made, and introduced the word "zombie" to the wider world.

Archaeologists in Ireland have unearthed two 8th-century skeletons buried with stones stuck into their mouths. They believe this could have been a way to ensure the dead did not rise up like zombies.  Bodies identified as revenants or the "walking dead" tended to be people who had lived as outsiders.

Do you ever wonder where the idea of the zombie came from? Cultures across the world, dating back thousands of years, have legends and lore about the dead coming back to haunt, terrorize and occasionally eat the living.

Top 6 Myths about Zombies
#1) ZOMBIES WILL EAT YOUR BRAINS
Despite popular belief, zombies don't eat brains. Bite compression work done by researchers from Rensselaer Polytechnic Institute found that the human mouth is both too flat and too weak to penetrate a human skull. So zombies may prefer brains, but unless they're using a giant nutcracker to pop open your skull, they would not have access to your brains. Furthermore, because it's commonly believed that zombies can only be stopped by destroying their brains, if the undead eat the brains of their victims, then they are eliminating their own reinforcements. Makes no sense.

It's amazing how many companies sell Zombie Survival kits....

And this might be why we see so many Zombie survival kit sites! When the CDC starts warning you on how to prepare for a Zombie Apocalypse, then you know it's for real! Haha.  How they use the media to reach more of the population!

A guide to Zombie movies

We have new takes on classics like "Pride and Prejudice and Zombies".  What would Jane think?

A Zombie Podcast, if you dare to listen

Stories for some of our younger followers on Zombies

Julie's Version is, as usual, a little "cuter" than the norm - and also incorporates her love of bees as her last name starts with a B! 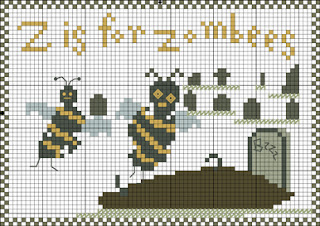 This makes a great outline stitch or border stitch  creating a geometric pattern. It can also be used as a filling stitch, when worked close together with the vertical stitches touching to make a lattice pattern.  Julie has used it for the grass under the tombstones.

I can't believe we have come to the end, now - I have loved working on this alphabet and am sad to see it go - but there is much to attend to here at In the Company of Friends, and we hope you will continue to watch as we develop new products, and work on our upcoming book...

As always, click on the picture of the chart to be taken to our Freebies page, or click on Freebies in the sidebar.