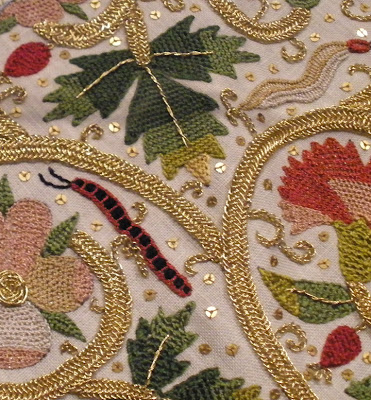 We are finally there, we have reached Winterthur and the event "With Cunning Needle: Four centuries of Embroidery".  We are so excited as we have watched the progress of the jacket project on the blog The Embroiderer's Story.  As you will see if you visit the link, this wonderful exhibit is over tomorrow - so do hurry to see it if you can.

We gathered early in the morning to hear several people talk about "the jacket" and excitedly wondered when we would get to see it. 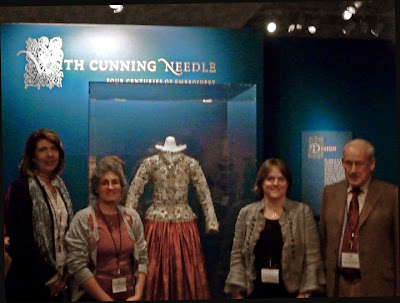 Our first speaker is Dr. Tricia Wilson Nguyen and her talk is entitled "The Plimoth Jacket: Listening to the Makers"

If you have ever been to one of Tricia's talks you know it is hard to keep up with your note taking.  Not only does she fly, because she has so much to get into the short time allotted which is never enough, but you get so entranced in the tale that you forget to write! So this is kind of what my notes look like for this talk.

So, hmmmm  - would you understand much of anything I took notes on at this talk? I do a bit, but you had to really be there to see the visuals and understand it all.   So we'll try to summarize a bit on what Tricia had to say.

She talked about the process of choosing the motifs for the embroidery, and how it was executed. One of their challenges was to have many, many embroiderers doing the work, and yet have it look cohesive.  After much study and experimentation, it actually became clear that the more different embroiderers there were, the more the work looked as though it came from one hand.  Now, she had X-rays of the embroidery and a very complicated model to explain this, but trust me - when you looked at the jacket, you didn't think - wow - I can see that people of all different abilities stitched on this.  Yet they did - everyone who wanted to stitch was allowed to - and it looks wonderful!  Tricia explained that professional embroidery studios in Elizabethan times used certain patterns available in broadsheets, and that you could trace certain patterns to certain embroidery workshops. 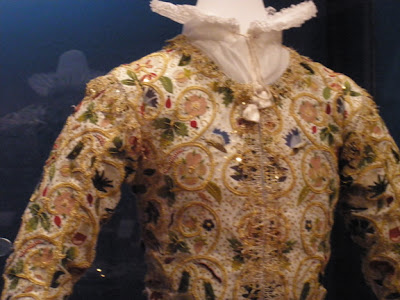 As she went on, Tricia began to talk of the threads used - how they heathered silks to shade between two colors, making a 2 ply, 2 color silk thread for this by making twisted thread themselves twisting from raw materials by splitting silk and twisting them together.  Some colors were blended,  then wrapped with metal threads, so workshops may have made their own threads as well as purchasing some. 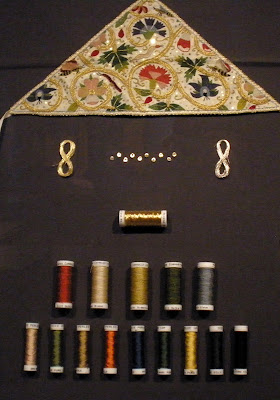 The metal for the threads was pure gold and silver, often from melted down coins.  There was also a lively second-hand trade to take the metal threads from old garments to return them to the "melting pot" (where the term comes from).  Clothing was pawned for the gold and silver threads.  A "Fripper" is one who dealt in "frippery" or metal lace - who melted it down for the gold or silver. Metal lace was actually coinage. The result of these pieces were to store value in them, to hold the silver and gold , the currency system of the day. 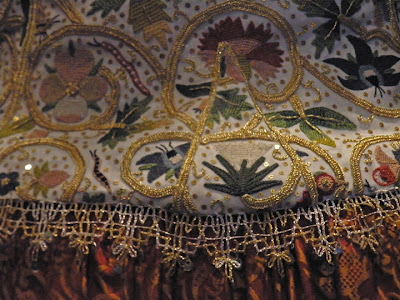 This was all so fascinating that it left us wanting more.  Tricia suggested reading the book Renaissance Clothing and the Materials of Memory by Ann Rosalind Jones and Peter Stallybrass, about clothes remade and re-used.


The next talk was by Jill Hall, the Co-Manager of the Jacket Project and Scholar of Historical Costume, Middleborough, MA.  Her talk was entitled " It's All About the Clothes"

Jill talked about placing the jacket in the context of the clothing of the period.   A book suggested by Jill is Dressing the Elite: Clothes in Early Modern England by Susan Vincent. Besides the history of costume she talked about linens laundered with things to give color, such as loden and saffron.  Clothing was primarily to protect from cold - cold was death in those days. But it also denoted your station in life.  Jill talked of clothing as a marker of gender and age, as well as status and position in society. 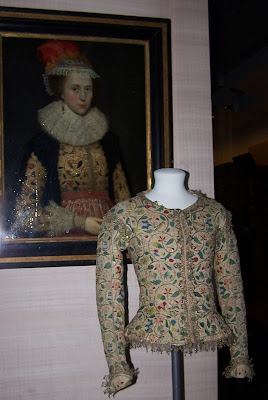 After this we enjoyed a break, where much to the men's dismay we took over all the restrooms available! The women, of course, outnumbered the men greatly!  During break we would dash around not only using the ladies' room, but trying to say hello to as many friends and acquaintances as we could before time was called to go back to our seats.  There is never enough time to visit and discuss all that we have just heard with one another. The days are too short when there is so much to enjoy.

She began by discussing Connecticut and the blossoming of needlework in the late 18th century vs. the earlier plainer needlework, bold floral motifs on decorated bed rugs, Norwich canvas work, band samplers and the Patten School Silk Embroideries. 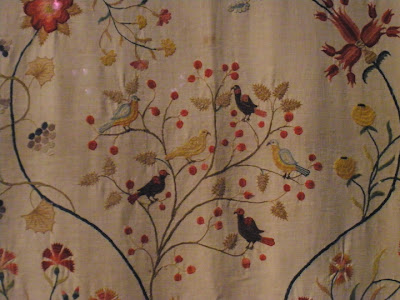 She said many of the patterns were shared by closely related women in the area.   Printed pattern books of the 17th century were also made use of.  There were also references to similar patterns found on plate glazes and headstones as well as the hand carved furniture designs from the Connecticut River Valley. 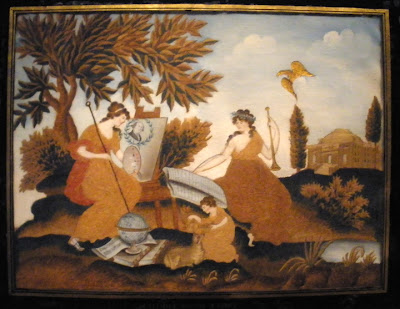 Charity was a popular story in the central medallion on many of the pictorial scenes worked at the Patten School.  It is questioned whether 17th century pieces of embroidery survived to be examples for the later embroideries, or whether heritage needlework, through family network and kinship traditions were a way of passing on the patterns and skills.

The last speaker of the day before lunch was Pam Parmal, Curator of Textile and Fashion Arts, Museum of Fine Arts, Boston.  Her talk entitled, " Artful Adornments: The Embroidered Accessories of Eighteenth-Century Boston Schoolgirls"

She discussed many of the schools and the work there. My notes fail me as I must have been suffering from lack of nourishment by now! I think I was on overload and entranced with listening to the speakers, as my notes became less and less. Hopefully some of the photos we have to share with you from the exhibit will make up for this lack of information. 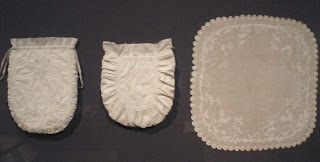 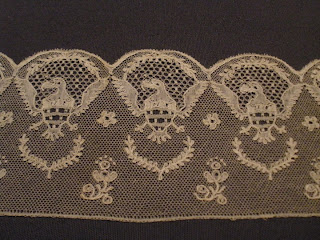 So we lined up for lunch and shared a delicious meal with many new friends.  Of course there were treats to give us some sugar to encourage our attention for the afternoon.

After lunch it was off in many directions as we headed to our workshops and tours.

My first was, "A Tisket a Tasket, Who Made the Casket" with Dr. Tricia Wilson Nguyan.  I do have several pages of notes on this, but I must just say that it was a whirlwind tour of her research on caskets and the information she is finding that has lead her to some new discoveries of how the caskets were made and the materials used.  I especially enjoyed the beautiful papers lining the boxes, and how maybe the real source for the boxes was book binders as opposed to cabinet makers for at least some of the parts of the casket. She not only had slides to share, but several real caskets to peer into and even touch! 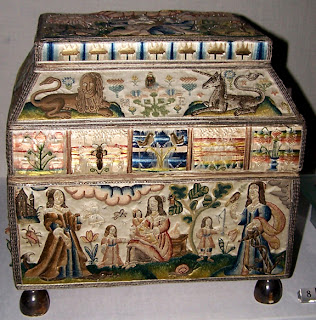 Martha Edlin's casket in the V&A

Tricia is leading classes in casket making currently on her web-site and they sound quite fascinating. I only wish I magically had more hours in the day so that I could take this project on! She is having many of the materials created for this project and I think we will all enjoy the journey that several stitchers are taking with her in creating their own caskets.  The current class is full, but she is taking names for a subsequent class.  If enough people are interested, she may be able to have the supplies manufactured to make a second set of caskets. 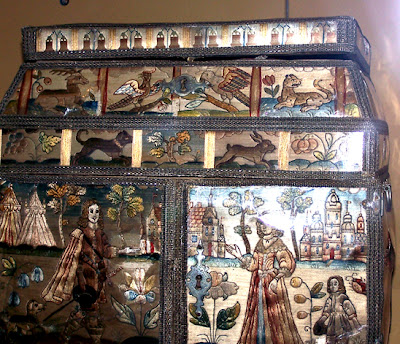 My next stop before the reception was a viewing of "My Favorite Things" with Linda Eaton, Curator Winterthur.  She pulled a variety of items that are some of her favorites from the collections for us to see up close and personal and she told us a little about them. 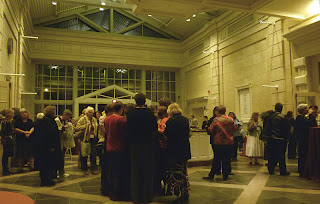 Time for the reception, but hey I haven't seen the exhibit yet or the jacket in person! So I dashed up the stairs and pretty much had the gallery to myself as the others sipped wine and appetizers and visited some more.  I knew I didn't have to worry about nourishment, we had a group dinner planned afterwards at a local restaurant with several friends from far and wide. 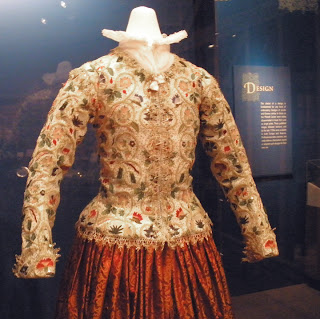 If only we could all try it on, the jacket that is. It is so beautiful and one wonders what it must be like to actually wear something this splendid. Well if you look closely, you can see I took a chance and had a photo taken wearing it ! What do you think? 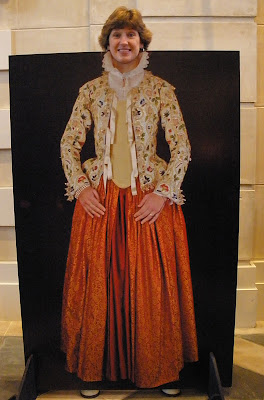 Day one of the symposium and I am out of breath and saturated with so many wonderful thoughts of beautiful needlework.  Tomorrow there is more!

Several of our photos are courtesy of our friend and travel-companion, Barbara Rombold-Gillies, who takes much better "people pictures" than we do!  Her blog, 1thread also shows some of her wonderful photos from this trip.


This week is your last chance to join us with our Tokens of Friendship subscription.  We'll stop taking orders after January 15th!  We are cooking up some lovely things for you - you love surprises don't you?
Posted by Julie at 2:54 PM