Things That Go Bump in the Night!

From goulies and ghosties and long-leggedy beasties
And things that go bump in the night
Good Lord, deliver us!

Before we get into today's post, we have what we think is wonderful news!  In fact, this is so exciting to us, we have had to sit on our hands to stop typing it into an earlier post.  We waited until it was official, but now it is, and we're so very happy!  We met our friend, Joanne Lukacher, at a sampler seminar she was responsible for organizing at Vassar College quite a few years ago now.  Since then, she has been writing a book on the Norfolk Samplers - a collection of samplers from Norwich, England and environs.  These samplers span about 100 years and have a definite stylistic theme.  This blog post by Joanne on the Hudson Valley Sampler Guild blog gives you a great introduction to the topic.  We knew that Joanne was looking for a publisher, and as we talked with others to try to help her find the right publisher, it became obvious what we wanted to do.  In the Company of Friends will be publishing this major work!  We are ... excited, nervous, happy, shocked, joyous and amazed!  This is such a grand adventure and we can't think of a better person to undertake it with than Joanne.  Look for the book in the fall of this year - and now, we'd best get our noses back to the grindstone...

Here in Seattle we are having another forced "Snow Day".  For several days we have been dodging snowflakes, and today the "Big One" hit! When it snows here in Seattle life comes to a standstill, we just are not equipped to handle this winter white stuff and today it is really trying the patience of the road crews and our local politicians in charge of keeping life going to some degree.  But the news force are having a big day of it! Non-stop news of this car sliding here and this amount of snow there and a photo of this dog in how much snow! ? !  The rest of the country must just shake their heads and wonder at us. But those that are smart are tucked in with their stitching, reading, quilting, family games or watching some old movies, maybe some with "Things That Go Bump In The Night" in them. I know my family has enjoyed all of the above through the last few days.  So grab a cup of tea, hot chocolate or whatever your drink of choice is and come along with our newest addition to the Dark Alphabet Julie has designed for you.

No we're not talking about Julie or I getting up in the middle of the night to use the loo! But I am sure we do bump around a bit and maybe if there were small children about they could be frightened by the sounds! Ok, that is not where we are going with this.

Things that go bump in the night, meaning frightening but imagined supernatural events.

The earliest known example of the phrase in print is in the 1918 in the Bulletin of the School of Oriental and African Studies:
"To a people ... who ... believe in genii, ghosts, goblins, and those terrific things that 'go bump in the night', protective charms are eagerly sought for."
That usage suggests that the author expected his readers to be familiar with the phrase. Around the same time the phrase was incorporated into a prayer:

From goulies and ghosties and long-leggedy beasties
And things that go bump in the night
Good Lord, deliver us!

This was recorded in The Cornish and West Country Litany, 1926, but it quite likely to be much earlier.

When the Whole Earth Was Overrun with Ghosts
Some say that ever 'gainst that season comes
Wherein our Savior's birth is celebrated,
The bird of dawning singeth all night long:
And then, they say, no spirit dare stir abroad;
The nights are wholesome; then no planets strike,
No fairy takes, nor witch hath power to charm,
So hallowed and so gracious is the time.
--Marcellus.
So have I heard and do in part believe it.
--Horatio.   [Hamlet, act 1, scene 1]

Grose observes, too, that those born on Christmas Day cannot see spirits; which is another incontrovertible fact.

More about the Night Before Christmas and Things That Go Bump in The Night http://www.huffingtonpost.com/varla-ventura/christmas-folklore_b_1159250.html

Newspaper articles regarding Things That Go Bump in The Night
http://library.sc.edu/blogs/newspaper/2011/10/28/things-that-go-bump-in-the-night-ghost-tales-found-in-historical-s-c-newspapers/

What frightens you? What do you believe about the supernatural, unexplained events in our lives?  Since the beginning of time, people have tried to explain why this or that has occurred and yet we still wonder if it is or if it isn't!  It has given us much entertainment not only at Hallowe'en but on those dark winter nights as we (not I, but my family) surf the television to find something to make their heart race a bit faster.  Some entertain with a touch of comedy, others with such horror that nightmares occur.  Below we have a few selected versions of entertainment that have used our theme of Things That Go Bump In The Night.

Gilbert O'sullivan even wrote a song that include "Things That Go Bump In The Night" in it's lyrics. Below is the first part of this song and you can see it performed by several artists.

Video of Gilbert O'Sullivan song, Things That Go Bump in the Night
http://www.youtube.com/watch?v=0uLVqP_eS3E

There is a different song, too, with Scooby Doo and  Things that Go Bump in the Night

Many pieces of art have been created with the theme of, Things That Go Bump in The Night.  Don't view these  at Deviant Art if you have nightmares easily!

And finally, there is a Murder Mystery to watch.

It is considered  a surface stitch as well as a pulled stitch and was originally used to insert a tape of needle-made lace to fabric.   This stitch is worked as a backstitch and is reversible as each leg is worked twice serving as reinforcement as well. This stitch can create a nice dividing band for your samplers as well.

Online, you can see this stitch at Arts and Designs  and at Needlework Tips and Techniques , both great internet resources for needlework stitches. 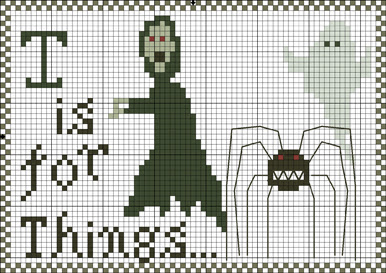 You will see that the Turkish or three-sided stitch was used to mark the teeth on the "long-leggedy beastie".  It is easier to stitch the mouth first, then fill in around it with cross stitch for the beastie's body.