Our first stop on our excursion to Philadelphia was at Stenton House, where Laura Keim graciously gave us her morning to lead us through the home and relate the history as well as show us some of the special needlework held there. 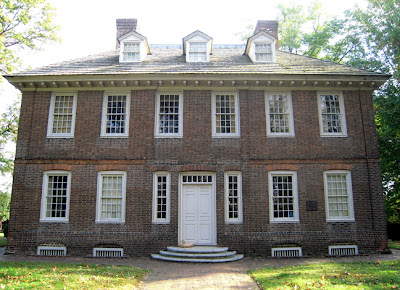 Stenton was the country house of James Logan.

It was built in the 1720's and was named after a village in Scotland where his father was born.  Mr. Logan met William Penn in England and in 1699 accompanied him to Philadelphia. He became a leading man in Pennsylvania when Penn returned to England. Logan was a Quaker. He was a politician, scientist and scholar.  His son William inherited Stenton after his father's death. William died on the eve of America's fight for independence leaving Stenton unoccupied by Logans during the American Revolution.  The house was used for headquarters by General Washington and British General Howe. After the revolution James' grandson George Logan and his wife came to live at Stenton.   In 1899 The National Society of The Colonial Dames of America in the Commonwealth of Pennsylvania became the stewards of Stenton.  They opened it to the public in 1900. This stewardship has encouraged research and much of life in the 18th century has been interpreted from these findings. 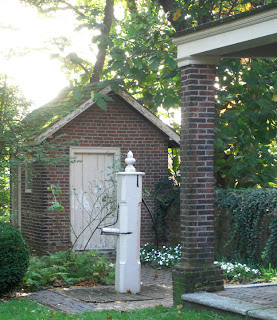 You will enjoy many beautiful furnishings as you tour the home and gardens here. There have been excavations from the grounds that have yielded china from the 1760's and these are displayed for you to see in the dining area. 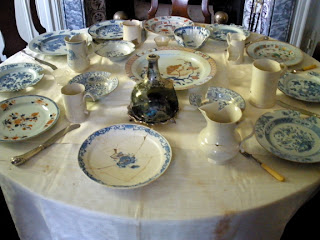 There are notes regarding Iroquois Indians who came to do trade and would camp at Stenton House. Many diaries and such were kept and these have given great detail to those who have been involved in the research and restoration of this beautiful home.  Included in this were records from Hannah Logan Smith on her expenses that listed sewing supplies for a wallet for John Smith made by her when they were courting in 1744. 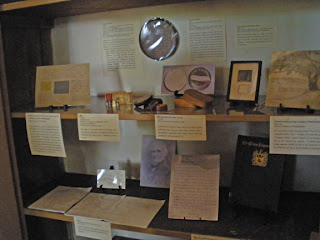 The needlework we enjoyed here was a couple of samplers one by Mary Logan and one by Hannah Haines. We also viewed a queen stitch pin ball, a needle roll with pin-keep, a wallet and a quilt. 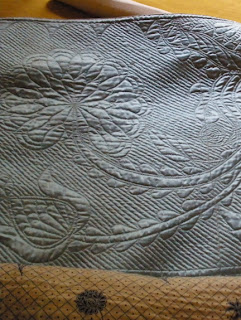 Laura next took us to the other location under her curatorship, Wyck House - one of the oldest homes in Philadelphia.  It was built around 1690 and grew as additions were made through the 18th century.  Hans Milan a Quaker from Germany was the first to occupy Wyck House.  Many generations have lived in this home, from the Haines and Wister families, most notably.  The families are still involved in the home and community.  There is an extensive historic rose garden and beautiful grounds.  There are many programs offered for the community here that continues the use of the gardens and grounds.

The needlework treasures we viewed here are too numerous to list but we will highlight a few.

- Margaret Wister silk sconce from 1738 when she was 9 years old. Silk Thread on silk using long and short stitch. 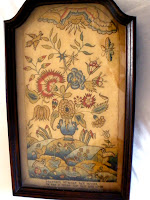 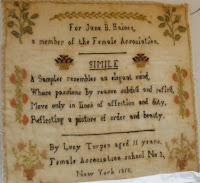 - Ann Haines Extract 1804 Westtown Boarding School - this was shown in Betty Ring's book
- Sarah Haines was Ruben Hines' oldest and was studying at a school in France 1824, did two samplers at the age of 11.  She died of a fever over a 10-day period.
- Hannah Marshall small band sampler 1776

Many wonderful needlework smalls and treasures and of course our time ran over and there was more to see! 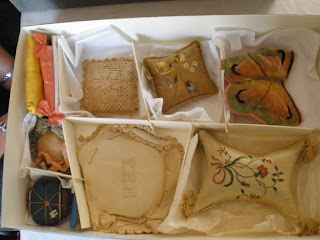 We can't show pictures of everything we saw, but we were lucky to get permission to blog and show these photos to you.  When you visit small museums and historical societies like this, always remember to respect their rules.  Ask permission to take photographs for your own study, and don't publish pictures online unless you have been given express permission to do so.  We were thrilled when Laura said - "please blog"!   Remember that light is needlework's enemy -don't use your flash, and don't handle anything - the oils in your skin can be disastrous for textiles.  Always ask your docent to turn a piece over or move it to a better spot.

We dashed from Wyck on to Germantown Historical Society where we joined Elizabeth Solomon and one of her lovely docents to enjoy the special needlework in their collection.

The Society currently serves as the home of Historic Germantown, a partnership between fourteen Germantown organizations joined by a common mission to provide knowledge and resources to help preserve Germantown's historic sites, interpret them to the public, and incorporate them into the life of the local community. Germantown's story is the story of founding and settlement, religious freedom and tolerance, patriotism, abolitionism, architectural excellence, industry, and community service

I have to admit my note taking became more of a list of names than details here, I was so overwhelmed by this time after lunch and our third stop of the day! There were Westtown samplers, others with Quaker motifs, 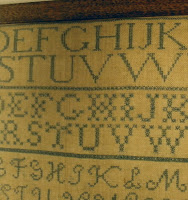 one commemorating the Battle of Tripoli in 1804 by Sarah Brland stitched in 1826, a beautiful hollie point and reticella piece by Amy Lewis in 1759 with a 9-patch layout and buttonhole stitch flowers in the center, lined with blue satin to show off the intricate work. Several other pieces drifted by as we oohed and aahed and then to top it off a few of their prized crazy quilts with wonderful embroidery accents were brought out for our dessert so to say.  We again ran short on time and kept our wonderful hostesses over their scheduled time.  They were so kind to share with us and we enjoyed it so very much.

Saturated with beauty, we headed to their suggested dinner location, The Valley Green Inn.  It is located in the Wissahickon Valley of Fairmount Park in the city of Philadelphia.  It is one of the last remaining roadhouses and the beautiful setting along the creek is a charming location. 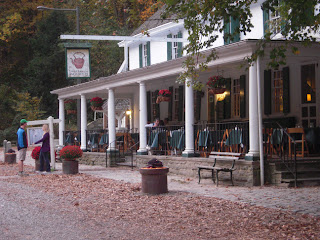 The food was delicious and the service friendly and leisurely. It was just the perfect way to end our first day.
Posted by Julie at 12:17 PM