J is for Jack-in-the-Box and Jacobean Couching Stitch 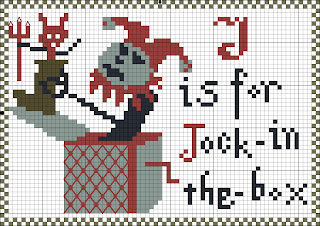 What do you think of when you think of the childhood toy, "Jack in The Box"?  Many think of the song "Pop Goes the Weasel", a popular tune the many of the jack in the box toys played as you cranked the handle waiting to see when that funny little clown would jump out of his box.  It doesn't seem all too frightening, unless you have a fear of clowns.  But do you know the origins of this childhood toy?


Depending on the country, the story varies a bit in it's telling, but most involve a devil! In French the jack-in-the-box is called a "diable en boîte", which means "boxed devil".  One of the first jack-in-the-boxes was pictured holding a boot with a devil in it. Some believe that the name "Jack" was a reference to the devil, referred to as a jack - is this also where we get Jack-o-lantern? 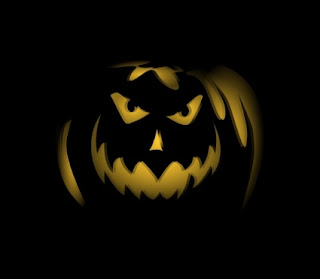 There is a legend in England about 13th century English prelate Sir John Schorne who claimed to have captured the devil by trapping him a boot. This story may have contributed to the toy's invention as well, as illustrations were made of him holding a boot with the devil's head popping out of it. According to folklore, he once cast the devil into a boot to protect the village of North Marston in Buckinghamshire. This theory may explain why in French, a jack-in-the-box is called a "diable en boîte" (literally "boxed devil").

Of course, wind-up toys had been evolving since early Grecian days and there was a revival of this earlier technology with clockmakers beginning in the 13th century.


In 1570 a jack-in-the-box was a phrase given a name as a sharp or a cheat, who deceived tradesmen by substituting empty boxes for others full of money.  So you see, this smiling clown came by way of more frightening times.
The Jack-in-the-Box has been one of the most enduring toys throughout the centuries. There are many stories and theories circulating about its origins. One theory is that it was a toy that was popularized in the 15th and 16th centuries, based on the very popular Punch puppet featured in the Punch and Judy shows seen in public squares throughout England beginning in the Middle Ages.


The first documentation of a Jack-in-the-Box toy was of one made in Germany in the early 16th century by a clockmaker as a gift for the son of a local prince. The wooden box had a handle on the side that when cranked, would play music until a jack, or devil on a spring was suddenly released. Word spread among the nobles and the demand for this toy was created.

Technology improved, and by the 1700s, the Jack-in-the-Box had become easier to produce, thus becoming a common toy for people of all ages. The Cockney tune known as Pop Goes the Weasel became a frequently used melody in the toy. The Jack-in-the-Box itself became a frequently used image in political cartoons, featuring the face of the latest politician to be lambasted.

In the 1930s, the Jack-in-the-Box toy began to be made out of tin, rather than wood. The exterior of the boxes were stamped with images from nursery rhymes and the "jack" was changed to one of the characters featured in the rhymes. The music was the tune traditionally sung along to the rhyme. A huge variety of Jack-in-the-Box characters continue to be made today and make a great toy for young children, due to the surprise factor associated with it. Of course, many people who are merely young at heart enjoy them, too.
Word Origin & History
jack-in-the-box
1570, originally a name for a sharp or cheat, "who deceived tradesmen by substituting empty boxes for others full of money" [Robert Nares, "A Glossary of Words, Phrases, Names, and Allusions," London, 1905]. As a type of toy, it is attested from 1702.
Jacobean Couching Stitch
Jacobean Couching is a filling stitch that is made up of horizontal and vertical long stitches, which are couched at the intervals with a cross stitch. This stitch is especially effective done using two colors, one for the horizontal and vertical threads and another for the cross stitch that couches the intervals. You can also use beads for the couching stitch.
Jacobean embroidery uses many filling stitches to add depth and dimension to the popular plant life created during this time period of embroidery. Many refer to this work as crewel work when they see it.  It was popular in ecclesiastical works, creating bed hangings and furnishings.

The internet has many sources for learning the stitch and some history and examples of Jacobean embroidery.  You may wish to experiment with more of the filling stitches used in this type of embroidery as well.   Julie has used the Jacobean Couching Stitch to make the harlequin design on the front of the box that Jack sits in.


Jo has reported that she has spotted my "deliberate" error - and since I'm not smart enough to have put in a deliberate error, I feel I should point out to those of you who don't want a "jock" in the box, that I forgot the tail on the a... a simple fix for you!


As always, please click on the picture of the chart to go to our Freebies page, or  click on Freebies on the sidebar.  Once there, click on A Dark Alphabet.  You may have to refresh the page to see the latest chart.
Posted by Julie at 3:00 PM