The Furies and The Forbidden Stitch 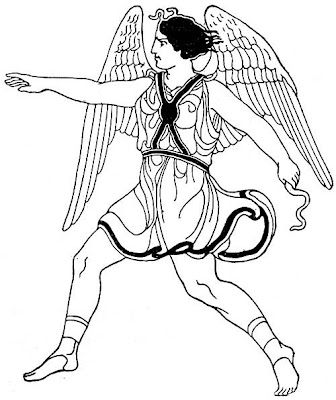 Hell hath no fury like a woman scorned. Where do we get this cliché? Well it relates to the Furies we are featuring in this installment of the Dark alphabet.  And who were the Furies?
In classical mythology the Furies were avenging deities, fearful goddesses from Tartarus who avenged wrong and punished crime. Usually the furies refer to three sisters, Alecto, Tisiphone, and Magaera  children of Gaia and Uranus.  They were placed in the Underworld by Virgil and it is there that they reside, tormenting evildoers and sinners. However, Greek poets saw them as pursuing sinners on Earth. The Furies are cruel, but are also renowned for being very fair. 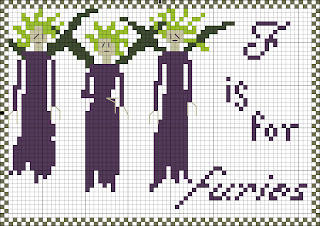 The Forbidden Stitch, also known as the Pekinese Stitch and Blind Stitch, is a very old technique,  and was used by the Chinese as a filling stitch.  The stitch is so fine that it is said to have caused the embroiderer to go blind and for health reasons was forbidden.  Perhaps this is just a myth, but this is a fine stitch and with the poor lighting conditions it was difficult work even for younger eyes.  Another theory is that the "forbidden stitch" is that used to stitch motifs that only royalty were allowed to wear, so it was forbidden to common folk.  Other sources call the French Knot, or Peking Knot the Forbidden Stitch.  All agree it's a Chinese stitch and very fine work, but for our purposes, we are talking about the Pekinese Stitch or Blind Stitch as described by Eileen Bennett in her Red Book of Sampler Stitches.
This stitch is a good choice for areas that need delicate shading, as this can be worked in closely placed rows. To create this stitch, lines of backstitches are placed and then loops are laid over  the back stitches, but do not pierce the ground fabric. There are really good directions here.
Becky 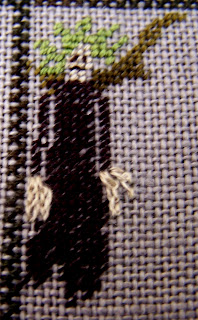 Isn't she lovely?  I've started stitching the furies for my F is for Furies, because I wanted to try the Forbidden Stitch ----shhhhh.  Becky has really come up with a doozy for us - at first, I was going to make the ladies' dresses in the stitch, but I immediately discovered that you don't want to do that with close-worked dark thread, and you don't want to do that much of it to try it out, so I changed to the ladies' hands - which I thought kind of made them look like they had long, bony fingers (albeit only two per hand!).    Here's a close-up: 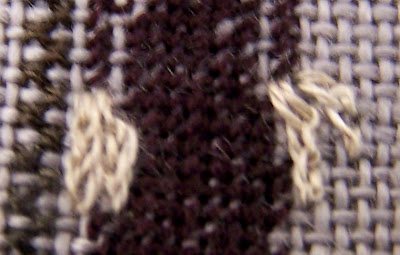 It looks a little like chain, and since I don't have young eyes, and it is very clearly stated that only young eyes can do it perfectly, I'm not worried that mine doesn't exactly look like the examples...  I think it looks creepy and that's all I'm going for!    If you aren't wanting to try the Forbidden Stitch, just use back stitches with two threads in your needle - the effect will still be long, bony fingers.  The Furies were reportedly blessed with bat-like wings and snakes in their hair.  It was really fun to imagine how they might look on a sampler!
I only have one Fury stitched so far, but I have been working away here and there on my alphabet - I now have A is for Apple, 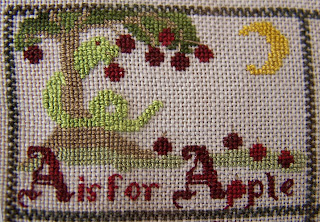 D is for Devil, which I showed you last week, and part of C is for Coven 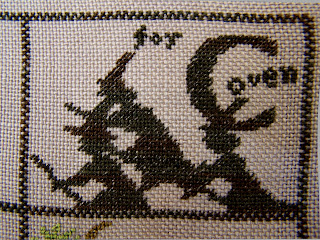 done besides my one lone Fury.  I will continue with my witches later today.
I have found that in some cases, I don't want such substantial coverage as a full cross stitch gives even with one thread on the 28 count, so I have done some of my motifs with tent stitch.  It sure goes a lot faster!  As always, click on the picture of the chart to be taken to the Freebies page where you will find a link to the Dark Alphabet, or click on the Freebies in the sidebar here.  Now, don't go stitching furiously!
Julie
Posted by Julie at 5:40 PM