Devilry and The Detached Buttonhole Stitch 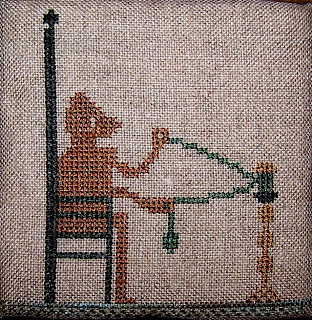 This installment in Julie's dark alphabet is the letter "D" for Devilry. She has used one of her favorite motifs the "Spinning Monkey" which in Dutch samplers represents the Devil. Devilry can be defined as wicked activity, reckless mischief and dealings with the devil.  A "spinning monkey" is an iconic representation of the Devil, standing for folly, laziness, lechery, and vanity. His punishment is that he will be turned into thread.
The stitch we have chosen to represent with the letter "D" is the Detached Buttonhole Stitch. You can see Julie has used it on the staff  for the fiber the monkey is spinning.  Click on the picture below to go to the Freebie page, or use the Freebie link in the side bar. 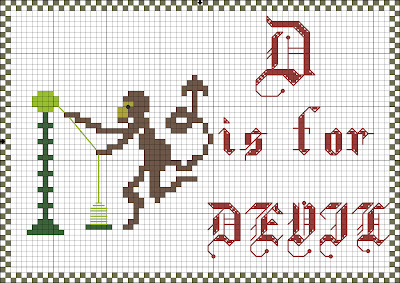 The Detached Buttonhole Stitch was a favored stitch in the seventeenth century, where they used this stitch to embellish clothing. The detached buttonhole stitch was used to fill in flower petals or in an application where solid coverage was desired.  A good resource for how to create this stitch, is in Darlene O'Steens book "The Proper Stitch". This book is such a resource and one of our favorites for teaching various stitches popular in sampler making.
Some good online resources for stitch diagrams and explanations are Historic Needlework Resources, Brazilian Embroidery Stitches and Needle 'n Thread.  Between these three, everyone can feel confident about the detached buttonhole stitch.
Note from Julie - if you just would rather not add the detached buttonhole stitch, it's very easy to just follow the chart and work the wool in cross and back stitches - no worries, no pressure!
This stitch you not only see used on clothing, but on samplers where 3 dimensional looks are needed and where odd shapes may need to be created, since it is an easy stitch to shape.  Clicking on the picture below will take you to a large photo to study the amazing detail.  This is a detail from a mirror surround stitched by Martha Edlin in the 1670's. 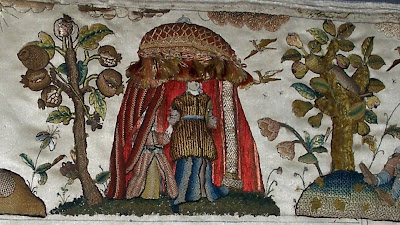 Below are some web sites that have examples on how to stitch the detached buttonhole stitch, some further history and examples of how this stitch was used.
http://www.bayrose.org/AandS/handouts/Raised_Stitches.pdf
This Reticella Work Article talks about the use of detached buttonhole stitch and shows photos of the stitch in pieces.
http://www.bayrose.org/AandS/handouts/reticella_rev.pdf
Here are some of the resources we used from the internet regarding Devilry and Spinning Monkeys as well as an analysis of a poem on the "Sampler" which mentions the spinning monkey motif as well as several other aspects of sampler making and their view on the meanings of these in this work by Vauxhall.
Devilry:
Concise Oxford English Dictionary (c) 2008 Oxford University Press:
devilry/'devlri/
noun
wicked activity.
¦ reckless mischief.
¦ black magic; dealings with the devil.
http://www.merriam-webster.com/dictionary/devilry
Spinning Monkey motif:
In Dutch samplers a spinning monkey represents the Devil
http://www.shakespearespeddler.com/symbol.html
http://jacketmagazine.com/40/r-daly-vauxhall-rb-cooley.shtml
"spies of the green tree flee the walled city. / Promise is also a dry stick. / The spinning monkey blowing bubbles is fated to the / spindle." Is it nonsense? The only clue is that the "spinning monkey" is an established sewing sampler motif. Sampler motifs were often iconic, that is, both images of animals, deities, or other figures, but also a sacred personage. A "spinning monkey" is an iconic representation of the Devil, standing for folly, laziness, lechery, and vanity. His punishment is that he will be turned into thread.
We have been a little "hit and miss" lately with blog posts - mostly due to life rearing it's "not so pretty" head - but also due to the fact that Julie is gearing up for a trip to Hawaii!  While she's there, she PROMISES to stitch up the four existing letters of the freebie alphabet so she can post proper pictures...
Meanwhile, if you have stitched any and would like to share with our readers, please email them to us at inthecompanyoffriends@gmail.com.  Jo has been stitching away, and here are first two panels, featured in our new "Art (Gallery) of Friendship)".  Take a look by clicking on the name, or on the link in our sidebar.
Gallery Guide Giveaway
We have winners!  19 to be exact!  We had 19 comments on the topic before the contest closed, and while we had originally thought to give 15 prizes, we couldn't possibly leave just four people out in the cold... so, even though we only have 15 copies of the gallery guide to give away, we have a cupboard full of our own inventory to raid for the other four prizes.  So - everyone who left us a note, please write to us at inthecompanyoffriends@gmail.com and give us your name and mailing address.  Prizes will go out as soon as Julie gets back from Hawaii!
Here's a list of the 19 winners!  Congratulations to you all, and thank you so much for supporting our blog!
Margaret
MartyG
Rebecca
Stitchin' Sweet Sue
Sheila
Cathy Lloyd
Vera
Jo who can't think of a clever nickname
Sheryl
MomCat
Babs in Alabama
graceunderpressure
Rene
Susan
Karoline
Helen
samplerlover
TeresaB
pj from iowa
Until next time - A hui hou kakou!
Posted by Julie at 2:55 PM