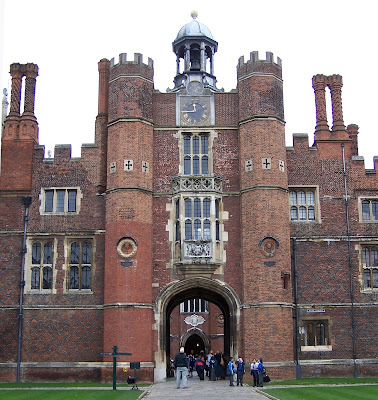 I know I haven't posted as much as I should - and feel doubly "guilty" by using some of the posts that I put on my travel blog a few years ago, but since that trip was all about samplers, I figured it would be alright. But before I do, I want to let you know that we have only one Blueberry Hill Boxed Set left!  We made a lot of those, and they seemed to be around for a long time, but this is your last chance, hahaha.

One of the highlights of our trip was Hampton Court.  Unfortunately, I do not have permission to show any pictures of the samplers I saw there, but I can tell you about it and show some pictures of Hampton Court as we saw it.  It was a beautiful spot!
Oh, what a wonderful day we've had at Hampton Court Palace! Up early and off for the tube and a little figuring to see which train to get and where. Take the District Line to Wimbledon where you change to the train for Hampton Court, don't you know. As we waited in Wimbledon for the train (due in two minutes), another train came along and a woman beside us jumped on it and yelled to us "if you want Hampton Court, you'd best get on this train, NOW!" Well, I don't normally take strangers yelling at me too seriously, but she seemed so earnest and otherwise normal, so we were all worried.
Then it became clear that, in fact, dozens of trains had been cancelled that morning, and we might very well not get our train, but in another minute, here it was, it stopped and we all got on, so it was all right. We might have gotten the last train! But we were just where and when we needed to be, so it was all right.
The palace is just a five minute walk from the train station, and we 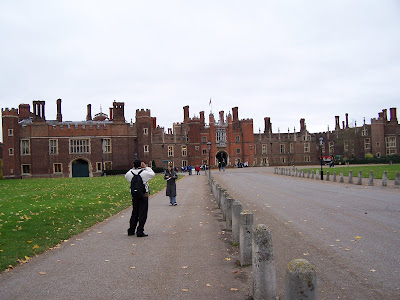 strolled in about 11 a.m. I had my appointment with the Embroiderer's Guild at 2, so we had time to look at some of the exhibits. There were at least five million school children there, so we usually looked to see what didn't seem to be teeming with them to decide what to do. First, we walked through the apartments of William III - very interesting - they've been kept up and furnished just as he had them, and you could almost feel how intimidating the rooms would have been for those kept waiting in hopes of seeing the king. 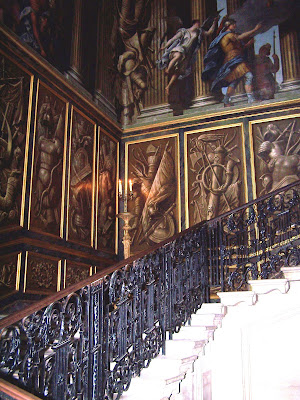 After a lovely stroll through the Orangery and a look out at the newly refurbished (since our last visit in 1994, anyway) private garden, we thought we'd best get some lunch. 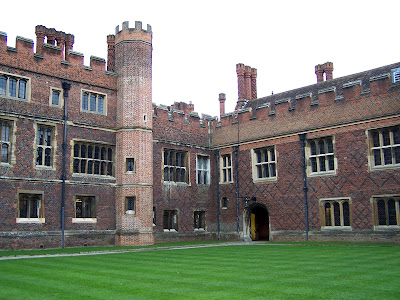 Down this hallway, through that archway, you come to the only heated room in the palace - the coffee shop! It was so nice and warm in there, we dawdled as we placed our order and then moved into the lunch room which was, again, unheated, to eat our grilled sandwiches. Then, I left Vern in the beautiful chapel (with many gorgeous kneelers that had been embroidered by the Embroiderer's Guild) to contemplate what he may, while I went off to my appointment. I had about 15 minutes, so took a quick tour through the Tudor Kitchens first - and enjoyed that thoroughly. I'm sure my sandwich was handled a bit more properly, hahaha.
I had hoped to see the Royal School of Needlework, which is also here in Hampton Court, but they didn't have any appointments for open study days while we were here, so the Embroiderer's Guild it is!  This is my one chance and I'm going to make the most of it!
At two o'clock, I was being ushered into a private study room with eight samplers laid out for my perusal. There were four whitework samplers and four were either polychrome or had both poly and monochrome sections. All were 17th Century Band samplers - I had asked for those and orphan samplers, but they don't have any in their collection, so I 'made do', hahaha. They were exquisite! I was given a listing of all pertinent information (but they forgot that Americans like to know the names of the makers) on each sampler, and was allowed to take lots of pictures for my own study! So while I can't show them on the internet, I will definitely be able to relive this lovely afternoon spent in the company of a group of young girls from the 1600's! The work on each was absolutely amazing - beautiful, detailed motifs and bands on the finest of linens. The whitework was unimaginable - even with a magnifying glass I couldn't make out how they were done. I saw the backs of them, too - and most were completely reversible - and so neat and tidy, they certainly shamed me! 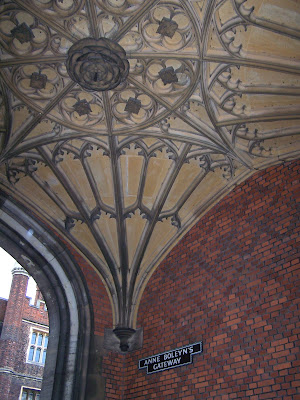 All too soon, I had to say goodbye to them and went off to join Vern again in the Chapel. We went upstairs then, to see King Henry VIII's rooms (what's left of them - they were mostly destroyed by William III), and then the Queen's Apartments (William III's wife). By the time we came out, it was getting dark and they were closing up the palace.
A short walk back to the train station, and we had about a half-hour to wait for the train back to London - which then went very quickly - we were home in less than an hour. And so tired after all that time. While you're in the palace, it's really not "indoors" - nothing is heated and you need your coat, believe it! So it was like we were outdoors all day. It certainly made us tired!
Posted by Julie at 4:48 PM