We last left Dora on the docks in Boston, wondering why James had not met her ship.  She took out the letter he'd written and read it again. (You can click on the letter to read it more easily) 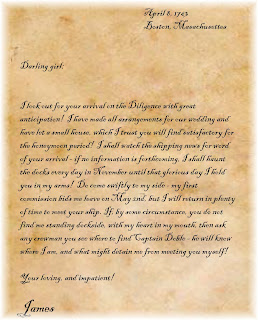 Just as she finished reading, a crewman bustled by with his seabag on his shoulder.  Dora stopped him and asked the whereabouts of Captain Doble.  "He be right over there, miss." and he pointed to a distinguished looking gentleman who was scanning the crowd departing the Diligence with an air of concern.  As she started toward him, he seemed almost to recognize her and came to her at once.  "Miss Boxworth, I presume?"  He had such kind eyes...  "Yes, and you are Captain Doble?  But where is James?  He was to meet me here"  "Yes, I know - if you'll just come with me - first we should get you situated and comfortable".

The captain picked up Dora's small bag and shouted to a sailor to deliver her trunks to an address in town,  turned and walked toward the city streets.  As she followed him, Dora looked around wonderingly.  This new place was certainly a busy, bustling place.  People hurried back and forth - shipbuilding was going on over there, offices and shops were down this way, and then suddenly, they were on a charming street lined with pretty houses.  She noted it was called Water Street and wondered if James lived here to be near the docks.  She was about to ask, when Captain Doble turned into the yard of one of the prettiest houses on the street and said "Here we are." This couldn't be James' house - he wouldn't be so successful just yet, so it must be Cap't. Doble's home.
Inside, a woman about ten years older than herself, and very pregnant, stood at the fireplace stirring a pot and warning a toddler to "stay away from the fire"...  At their entrance, she put her spoon down, wiped her hands and took off her apron.  "Hello- I'm Charity Doble, and you must be Dora."  She held out her hand to her guest in the modern way, and Dora took it gladly.  She was glad to be ashore and to be among people who were obviously friends of James'.  But where was he? 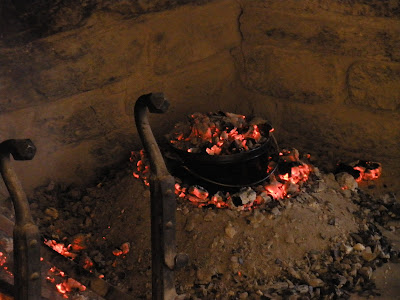 Mrs. Doble said "Sit yourself down, girl - you must be so weary after that long journey.  I'll put the kettle on and we'll have tea brewing in a twinkle!"  Dora was happy to sit and have a cup of tea, but why didn't anyone tell her where James was?  Perhaps he was off on a different ship - not Captain Dobles' of course, since he was here.  Well, she was sure they'd tell her in good time.
Once she was comfortable, and warmed by the fire, Captain Doble sat down with Dora and his wife, and said, "Now, you've questions, I'm sure.  First, let me tell you that you are welcome to stay here as long as need be, and if you'd like us to arrange passage home, of course, we can fix that up in no time.  It's my very sad duty, however, to tell you that James has perished on our last voyage out."
Suddenly there was a ringing in Dora's ears - the room seemed to spin, and she later recalled dropping her tea cup before she fainted dead away.  As she awoke, she was aware that she was lying on a cot with a blanket over her, and she could hear  Charity scolding her husband.  "Well, what kind of a way was THAT to tell her?  No wonder she's fainted!  One minute she thinks he's coming through the door any time and the next you tell her the whole world has changed!"  So it wasn't a mistake... James was dead.  What would she do?  What COULD she do?
After awhile, she sat up and moved back into the main room of the house.  When they saw her, the Dobles jumped into action, making sure she had a comfortable chair near the fire, and then waited to see what she'd say.  Slowly, Dora began to speak.  "Well, I hardly know what to think to do.  I've no money in the world to pay for passage home, and I wouldn't be welcome there anyway.  No, I don't think I'd like to go home.  Oh!  James' mother - she must be told.  I'd best write a letter immediately."
"James' mother has been sent a letter - she probably received it shortly after you left Scotland.  I'm afraid she's been grieving now for some weeks.  As to money - James has left you the money he had saved, along with this letter." And Cap't. Doble handed her a small packet.  Dora started to open it, but stopped.  She just didn't have the heart.  Seeming to understand, Captain Doble said "I believe that this is simply a letter telling you that if anything should happen to him, the money he had saved is yours.  And perhaps a few private words.  But his death was an accident, and he had no knowledge of it beforehand and no time to communicate anything before he was gone."
"How did it happen?"  "We were off the coast of Maine, on our way home, when a Nor'easter hit us.  The winds were stronger than I've ever seen, and the waves washed over the decks.  Every man who was not absolutely needed was ordered to stay below decks, and we were battening down to ride out the weather.  All men above board were tethered to their posts so they couldn't be swept overboard, but one crewman was having trouble getting his rope tied.  James untied his own and went to help him.  Ma'am - he saved that boy's life, but on his way back to his own post, he was knocked off his feet by a ferocious wave and swept overboard.  We looked for him for hours, but the storm was too bad.  We've never found him."  "Then he could have been swept ashore to safety!"  "No, ma'am, I'm afraid not - the water was so cold and we were so far from any shore - no, he probably didn't live more than a few minutes - I believe the water pulled him down and he wouldn't have been able to get to the surface before he drowned.  I'm so sorry to have to tell you this dreadful news."
Dora didn't say anything for a little while, and the Dobles gave her some time to absorb it all.  Charity continued with preparations for their dinner.  It wasn't a grand meal by any means, but tasty and nourishing, and later, Dora would recall her first meal in America with a smile.  She always said "The kindness shown to me in my first hours in America convinced me that this was where I belonged." 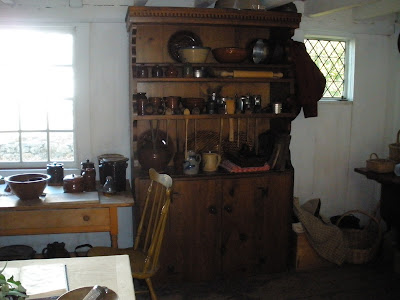 Charity's Kitchen
Their meal consisted of an oyster soup or stew, pan fried perch, what Dora later recognized as Boston Baked Beans, and biscuits.  For dessert, a crumb custard.  As Dora shared the Dobles' hospitality, she began to formulate a plan.  She would stay here in America where such a loving family seemed to thrive. Here, she had at least two friends, a little money, maybe, and a place to stay for a little while.  James had also talked of a small house - perhaps that was still a possibility for her.  Surely, she could find some kind of work, and perhaps begin to make her own way in this new country. 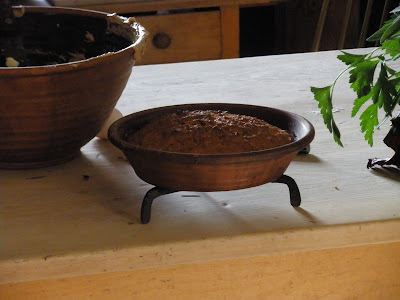 The rest of the afternoon was spent in conversation with the Dobles.  Charity, especially, was helpful in advising Dora of some opportunities.  One of the most promising was an opening at a local school for a needlework teacher.  Dora did beautiful needlework, but this was for plain sewing.  Would her darns be good enough?   She'd just have to hope for the best. 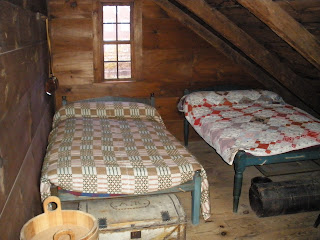 Finally, that evening, as she lay in a strange bed, in a strange city, Dora opened the letter from James.  There wasn't much to his last missive, but of course, he hadn't actually thought it would be his last words to her.  They were "just in case". 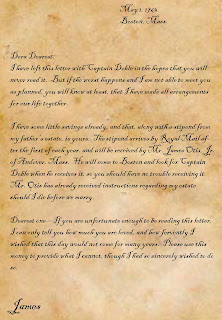 When Dora set up housekeeping for herself, she asked Charity for the receipt for the excellent custard they'd had for dessert that first day.  We found it slipped into her journal. 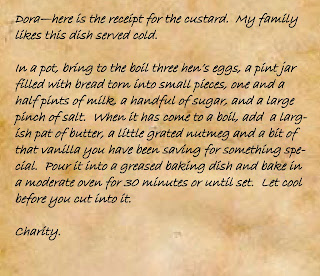 If you wanted to try it yourself, here it is in more modern terms:

Boil together the first five ingredients.  Add the other ingredients and pour into a greased 1 1/2 quart casserole dish.  Bake at 350 for 30  minutes, or until the custard is set.  Chill and serve cold.
Posted by Julie at 5:51 PM