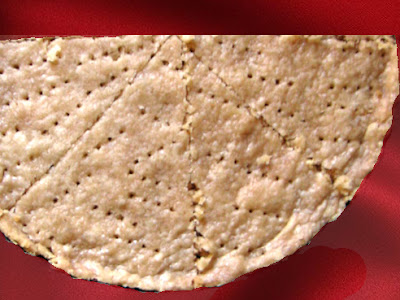 I love shortbread - have been making it from the same recipe since I was a child, though I have added lavender in recent years, something my 10-year-old self couldn't have imagined! But it's a great addition. Recently,  I got curious about the history of shortbread and found some interesting things.  As you probably already knew, shortbread has Scottish origins.  What you might not have known is that it evolved from a medieval kind of biscuit which was twice-baked and sweetened. Butter has always been an important ingredient, so the name "shortbread" comes from "shortening".   Butter was expensive, so this delicious treat was usually only made for special occasions, like Christmas!
Some people associate it's invention with Mary Queen of Scots, who loved the sweet treat, while others say it's been around since as early as 1100!  The traditional round cut into triangles were called Petticoat Tails, because their shape looked like the triangles of fabric used to make petticoats during the time of Elizabeth I.  Mary enjoyed shortbread flavored with caraway seeds.  Shortbread was also formed into small Rounds, like the cookies we enjoy today, or Fingers - a large rectangular piece cut into small slices.  However you shape your shortbread, you're sure to like some of these recipes I've found.
My recipe came from one of my Mom's old cookbooks, which is about 75 years old now (How can that be?)  My mother always made them at Christmas, and then later, so did I.
MOM'S SHORTBREAD


1 cup butter (2 1/4-lb sticks) at room temp.
1/2 cup cornstarch
1/2 cup icing sugar
1/2 tsp salt
2 cups sifted, all-purpose flour
Sift the dry ingredients together four times.  (I know, I know - but it's what makes the cookies melt in your mouth.  Buy a battery-operated sifter like I did!)  Mix in the butter with your hands (the heat from your hands melts the butter and makes the batter hold together better than if you mix with a spoon.)  Roll into walnut sized balls and place on shiny, ungreased cookie sheets.  Flatten with a fork or cookie press dipped in flour.  (You can crowd them on the cookie sheet - they don't spread).
Bake at 325 for 20 minutes, or until they're as golden brown as you like them.
Makes about 2 1/2 dozen.  Can easily be doubled.
To make the Lavender Shortbread, just crumble in a small handful of cooking-grade lavender (I buy mine at Whole Foods) before you start mixing in the butter.
To make Chocolate Shortbread, substitute 1/4 cup of unsweetened cocoa powder for 1/4 cup of the flour.  For some reason, to me, the chocolate shortbread should be spread out and cut into fingers, but that's just my personal bias.
Here are some cool recipes I found online:
http://www.undiscoveredscotland.co.uk/usrecipes/shortbread/index.html
http://www.joyofbaking.com/shortbreads/CranberryWhiteChocolateShortbreads.html
http://www.tching.com/2010/11/tea-in-your-shortbread-anyone/
The delicious aroma of Christmas baking makes the whole house smell wonderful!  Make sure you bake plenty!  They'll disappear fast!
Happy Holidays
Julie and Becky
Posted by Julie at 6:09 PM