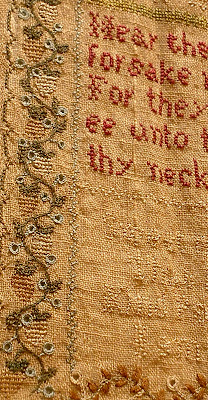 This sampler is NOT one of those auctioned - it is "just for pretty".

We see notices for sampler auctions all the time and sometimes wonder where the samplers come from.  This past week or so, a drama has played out that brings those thoughts to the forefront. Last Saturday, November 20th, the Burlington County Historical Society auctioned off 29 samplers from their collection, despite vigorous protestations from the sampler community.  The stated purpose for the sale changed from wanting to install "interactive" displays to attract children and families to "new acquisitions" when it was pointed out that it was actually against museum policy and the ethics standards the museum community has set for itself to sell off collections for anything other than to purchase new items for the collections.
That some of these samplers had been bequeathed or donated to the museum means that these kinds of donations may not be so forthcoming in the future.  The samplers sold were New Jersey samplers and completely within the stated mandate of the historical society.
I know everyone who has been following this story is saddened to see the samplers sold in this manner.
An interesting addendum to this story is that one of the samplers from their collection - an extremely important New Jersey sampler, which was apparently not slated for the auction block, was stolen during the preparations for the sale.  As of yet, no word has been received as to the outcome of the investigation, but it has definitely been reported to the police as a theft.
Another major auction of samplers will take place this weekend - Friday, November 26th, when Sue and Richard Studebaker's sampler collection will be auctioned.  You can see the catalog here.
Sue Studebaker is the author of  "Ohio is My Dwelling Place" and "Ohio Samplers — Schoolgirl Embroideries 1803–1850", a catalog of an exhibition at the Warren County Historical Society, which she guest curated.  She pioneered the research of Ohio samplers and her sudden death in January of 2008 is still felt by those of us who were lucky enough to have known her.  We counted her as a friend and mentor and she is missed every day.
Seeing the collection that Sue and Richard lovingly compiled in Garth's catalog is a bittersweet experience.
On a MUCH happier note, the Sampler Survey undertaken by the Colonial Dames of America has born fruit!  They have published their results online in a searchable database - a great boon to sampler enthusiasts and researchers.  You can see the results here.
For any who don't know about the Sampler Survey, the Colonial Dames have been endeavoring to update the seminal work done by Bolton and Coe in their "American Samplers" published by the Colonial Dames in 1921.  Ideally, this database would include every sampler extant in the United States, having broadened their scope from the original aim to locate each of the 2500 samplers listed in the first publication.  Realistically, of course, they have not been able to come close to that, but they have received information on approximately 1200, most of them American and about half of them have photographs accompanying them.
If you have, or know of samplers that should be listed in the survey, please go the Sampler Survey site and fill in the form.
Later this week, we'll continue our review of the Connecticut trip.  For now, Becky and I are snowed in and hoping to stay warm by the fire with hot chocolate and our stitching!
Posted by Julie at 12:05 PM