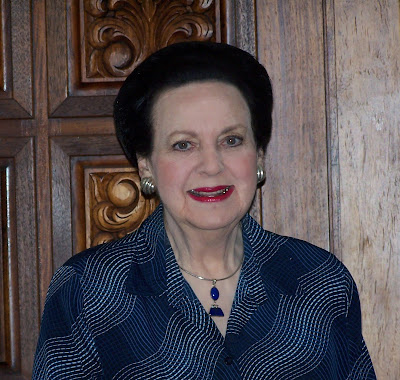 This week we would like to introduce you to a friend of ours, Mrs. Marian Soss of Burlingame California.  I was lucky enough to meet Marian many years ago and our friendship has continued mostly via the post...cards and letters back and forth keeping each other up on the happenings in our lives, both sampler and family related. I had the opportunity to visit Marian again this last week, when my daughter Natalie and I tagged along with my husband on a business trip to the area. We arranged to meet Marian for lunch at a delightful restaurant - the Iron Gate in Belmont, CA.
Marian has had a very interesting life. Her story could make for quite a book in itself, but what first drew me to Marian was her sampler collection. 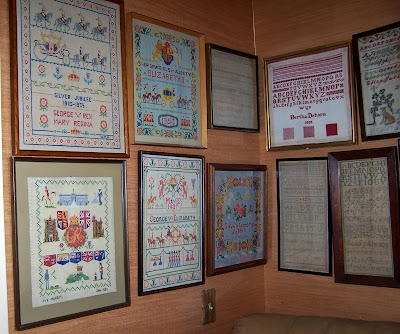 The first trip to visit her was with the Northwest Sampler Guild on a field trip to the Bay area. The story of how Marian's sampler collection began and continued to grow was such a story of love and was so endearing.  She has continued to use her sampler collection to do good works for so many years now, donating to Mission Hospice the honoraria that she receives for her "Sampler Talks", that she so generously gives throughout the year to interested groups, which she invites into her home. 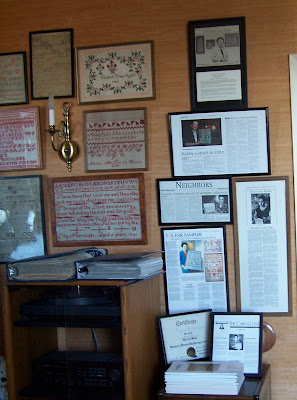 Marian has been honored many times for her good works and once you meet her you know why. She is a shining example of how one person can make a big difference. 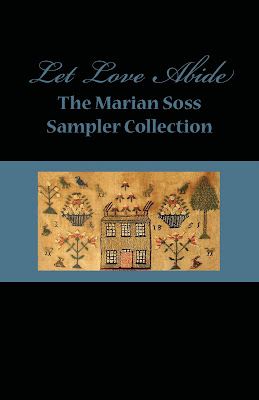 A couple of years ago, Julie and I invaded Marian's home and spent three days photographing and documenting Marian's sampler collection. Our friend, Barbara Rombold-Gillies, helped to record information on each sampler and from this we published the book "Let Love Abide". 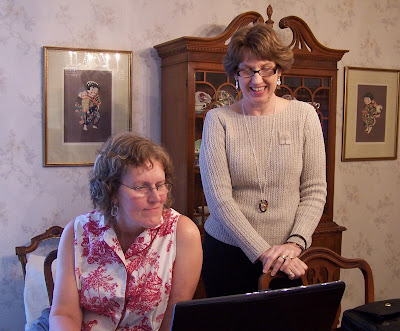 In those three days we photographed each piece, measured it, and documented the stitches and materials used. 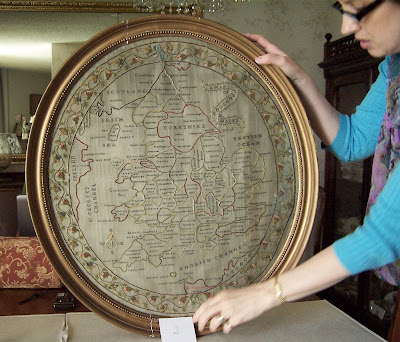 Some of the pieces have special little stories about how Marian came to own them or found them and those were noted as well for inclusion in the book. 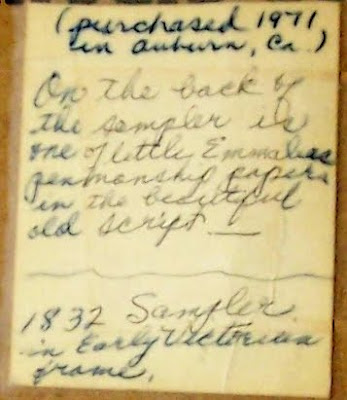 There were over 100 samplers in her collection at that time, though she has since added to her collection!  All of the profits from this book are given to Mission Hospice in San Mateo (currently moving to Burlingame, CA, to a new home base.) Mission Hospice is very dear to Marian's heart and has been her favorite philanthropy for her sampler work for many years.  **Note, we still have this book available on our website if you have missed purchasing a copy! It is a special story and one so many have enjoyed hearing. It starts with Marian receiving a small ragged piece of linen (sampler) from her soon-to-be mother-in-law at her engagement party! 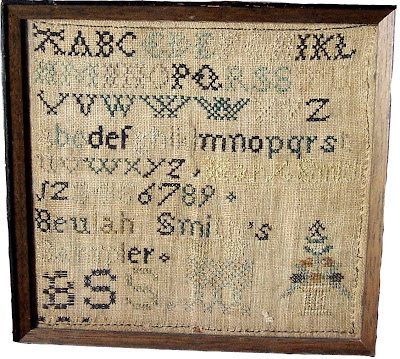 On this trip I was excited to share with Marian a recent book I had read. My friend Lynn had suggested it awhile back and I had enjoyed it so much, I have shared it with many people.  Now I wanted to share it with Marian. The story is one very familiar to her and so similar to one of the fascinating stories she had shared with us about her life.  The book is "Hotel on the Corner of Bitter and Sweet" by Jamie Ford, and the story takes place in Seattle's International district, cutting back and forth between 1986 and the 1940's during WWII, when the Japanese were sent to internment camps. Here in Seattle they were first sent to Camp Harmony in Puyallup.
I know Jamie Ford wishes he had learned of Marian Soss and her work there prior to finishing this novel, but still the story is special.  Marian attended Garfield High School here in Seattle. At the time this novel takes place, it was her senior year.  That spring, before the end of the school year, and before the Garfield High School Annual was complete, her many Japanese friends were rounded up with their families and sent to the internment camps. Those who were seniors would not graduate after all their years of hard studies! Marian just could not live with this and worked with all the leaders in the various high schools in Seattle and the principals of the schools to make arrangements to deliver the diplomas and half-finished year books to the Japanese students from the Seattle area now living at Camp Harmony.
They held this small ceremony under the watchful eyes of the military officers who surrounded them with their guns by their sides.  As you can imagine, Marian tells us of how emotional this time was... not knowing what was to become of friends and their families in the camps. They so much wanted a bit of time to share with each other and were granted 15 minutes and no more! So they raced to the central area where they were allowed to mix and wrote like mad in each others' year books.  But when those 15 minutes were up they were quickly escorted out and left to wonder when they might see each other again.
Just recently Marian received an honor for her part in this ceremony from the Japanese Society. She also received a phone call not very long ago from one of those Japanese students who saw that she was receiving the award. He told her how her message, written in his yearbook, kept him strong during that difficult time.
Other stories abound...  she met her beloved husband Thomas during WWII when she befriended his sister, who later married her brother, and began to write to him when he went off to war.  One of her letters got through to him at a time when no other mail was making it to where he was.  He reportedly turned to a fellow soldier in his foxhole and said "If we get out of this thing alive, I'm going to marry that girl."  Later, Marian sang with the USO, traveling to many different places to entertain our men and women in uniform.  Her husband has also been honored for his work as one of the liberators of the Mauthausen concentration camp.  He took many photographs of the camp as well as the victims, living and dead, to serve as proof of what had happened there.
As you can see, Marian is one of the most amazing women we've ever met - yet so completely warm and approachable.  She loves people and she loves life so much, and this love has touched so many people!  She is a true grand lady and we feel so privileged to know her and to have worked with her.