Back almost a week from Spring Break and it's been a whirlwind! We flew through the Oregon Coast, literally. High winds and storms were the norm, with a few breaks to allow us some outside time on the dunes as well. Life just goes so fast these days, with so many schedules to keep track of. I can't say I want to give up any of it, it's all good! I just wish I had time for more. More stitching, more studying, more reading, more quilting, more crafting, more playing, more family and friends. Oh and of course tea!
Julie and I are working like fiends to finish up the new products for the online show that starts next Thursday afternoon as well as several special orders for guilds and shops we have in the works.  We hope you will all stop by http://www.needleworkshow.com/ to see our fun new products as well as those of many of your other favorite designers.  You can ask your favorite shops to bring in the items you wish or, if you do not have easy access to a shop, stop by our web site and place your order there. Next week we will highlight some of our new products and tell you more about them. 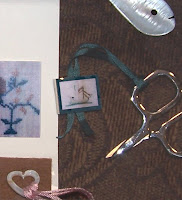 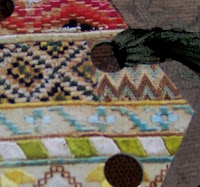 For right now we just wanted to tease you a bit, but you have to wait until the 15th to  really see them!  Remember, this year, the show is open to the public from Thursday, April 15th through Sunday, April 18th!  It will remain open another day for shops so they can get their orders in - so please be sure to let your local needlework shop know what you'd like them to order for you!

This gives us time to turn our attention back to the wonderful time we had in Old Salem at the MESDA textile seminar. We promised some highlights and in this post I would like to tell you about the talk given by Johanna Brown, Director of Collections, Curator of Moravian Decorative Arts, Old Salem Museums & Gardens. Her talk Washed in Blood: Moravian Embroideries was fascinating. She links many of the symbols found on Moravian pottery with those same or similar ones found on embroideries.

It's almost like a secret language, the symbolism found in the arts.  Remember the secret languages you used to create to send special letters to your friends? I loved that!  What about the Victorians and their language of flowers? 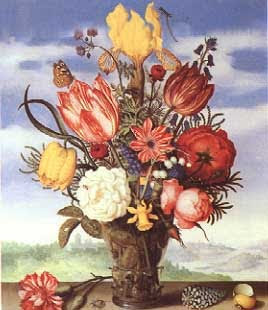 Many cultures in the past have especially found women to have secret languages they shared, when they were not allowed to speak their true thoughts. One book that comes to mind is Snow Flower and the Secret Fan by Lisa See - a book on Chinese women who were so sheltered, but shared a language by passing it through the embroidery on a fan.

We enjoy the stories we hear regarding the meanings of the symbols found on various needlework - samplers and crazy quilts especially and wonder if truly these were the thoughts of the women who created them. I am hoping Johanna will continue her research into the fascinating similarities of symbols she has found on the Moravian pottery and embroideries and the stories they relate to in the Moravian religion and will one day publish that for all of us to share!

I am not well versed in Moravian religion, so please bear with me, and forgive any inaccuracies as I try to share what I heard as I listened to this fascinating talk. I will tell you now; some in the audience were a bit put off with the startling imagery that was brought forth.   We want to thank Johanna Brown for providing these images to us so we could share them with you.  We have found all the curatorial staff (and other staff, too!) to be so generous and welcoming.  We greatly appreciate being able to show their images, as we have found no others to use from any sources.

Johanna started with the teaching of the blood and wound theology and the mystical marriage of Moravian believers to Christ, showing an image of a woman kneeling in a cavern - symbolically in the wound of Jesus as he was crucified, washed clean in His blood.  While this is a scene familiar to many Moravians, its graphic quality was shocking to the unwitting audience. 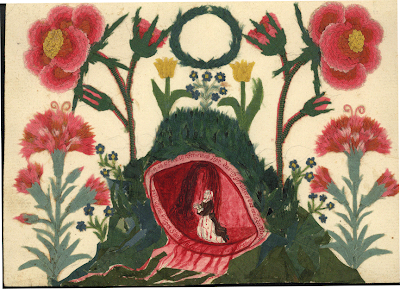 (Needlework done by Marianne Von Watteville ca. 1750. Collection of Moravian Archives, Herrnhut, Germany.)
Under the dripping wound, plants and flowers sprang up.   There could be no mistaking the import of this image.
Johanna showed us how on a piece of pottery, the artist represented the hill where Jesus' cross stood, and the beautiful plants that sprout there. 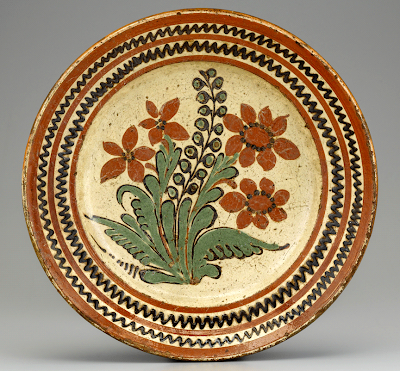 (Ca. 1800 slip decorated dish made attributed to the shop of the first master potter of Salem, Gottfried Aust, ca. 1775-1788 which pictures anemones and lily of the valley.  It is in the collection of Old Salem Museums and Gardens.)
To us, it looks like an innocuous pastoral scene depicted in a stylized way.  When these images are pointed out and shown to you on several different pieces, you begin to see the story and similarities, and the evolution of the symbols to something we, as outsiders, would never recognize as religious symbols. They have communicated the message of salvation, through the side wound of Christ, thus incorporating their religious beliefs into their artwork.  Johanna remarked that this would have been obvious to a Moravian in the 18th and 19th centuries and serve as a constant reminder of his or her faith.  Slip* decorated dishes illustrated an artist's beliefs by using images as metaphysical messages, without drawing attention from strangers.

* Slip:  clay mixed with water to a creamy consistency, used for decorating or patching a ceramic piece

Other Moravian symbolic images and their meanings are below:
Forget-me-nots: relationship with Christ.

Tulips: the challis shape as for communion.

Lilies: reminder of advent of Christ and piety.

Rose: the fleeting nature of time, death and the next world. The rose can also represent purity and perfection.

Carnation: metaphor for love, that of a bride and groom, mystical marriage with the Savior.

Red anemones: the flowers that spring up from the ground at the crucifixion nourished by the blood of His wounds.  This represents the sacrifice Christ made for his followers.

1766 saw the beginning of Salem, North Carolina's communal society. Unmarried men and women lived in separate dormitories, called the single brothers and the single sisters houses.  Families leased lots for their homes from the church.  In the dining room of our Inn, there was a beautiful painted mural of Old Salem as it must have been so many years ago. 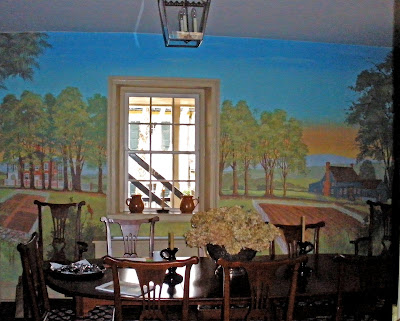 Moravians believed in education for both girls and boys as early as the 17th century, as an instrument of salvation (because the soul had to be trained to search for truth and to recognize it when it was found). Since the Moravians considered every human soul a potential candidate for salvation, every human being had to be educated. In 1804 the boarding school opened. It was attended until the age of 15 if so desired and cost $160-$180 a year, plus extra for additional items. Of the school's 39 rules, 3 make a reference to embroidery. 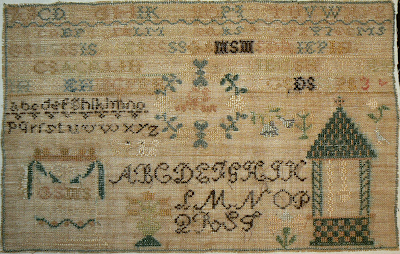 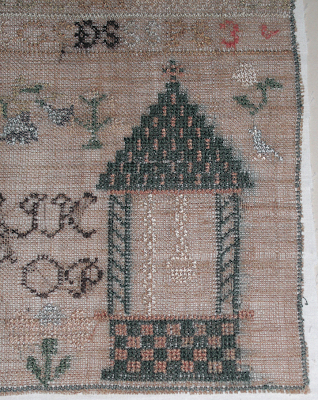 There is an alphabet at the top, middle and bottom. They were typically wider than long, and neoclassical in style.  Typical embroidery subjects were the well, water, biblical teachings, gospel of John and the spread of the gospel, symbolic of the cleansing of the soul through baptism.

You can see this is but a mere glimpse into these images found on these two art forms and the Moravians in general. But it gives you a taste and hopefully Johanna will continue her research and provide us with more insights into the use of symbolism of the Moravians in the near future.
Posted by Julie at 6:31 PM