What do Spinning Monkeys and Love Notes Have in Common? 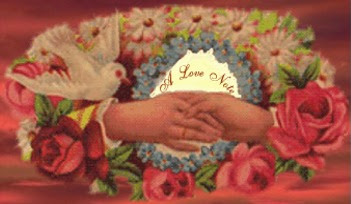 Not much - BUT our love note to you is a set of free charts for Spinning Monkeys.  Becky is away on a small vacation with her daughter, so, left to my own devices, I am up to my usual "monkeyshines" around here - and playing with the motifs I love the best - the mischievous ones! 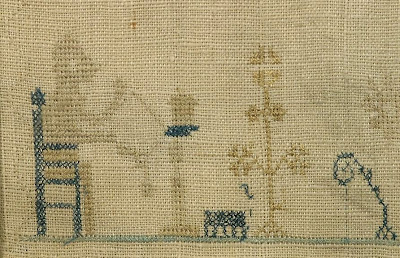 Spinning Monkeys are delightful little creatures commonly found on Dutch samplers - this is the first one I ever saw, and since then, it has captured my imagination.  If you are not familiar with them, they are whimsical little creatures, shown sitting in a chair and spinning with a distaff and drop spindle.  The distaff is the stand from which the unspun fibers are pulled and the spindle is the piece that is dropped and spun to hold the fibers together and create the yarn.   We get the term "distaff side" to denote the female realm because spinning like this was woman's work.  Later, when the spinning wheel was invented, and brought into wide use during the industrial revolution, spinning became mechanized and no longer necessarily relegated to women.

Now - why would all those Dutch girls put spinning monkeys on their samplers?  There are many different theories - according to Shakespeare's Peddler, while monkeys were symbols of laziness and mischief, the spinning monkey was the sign of the devil on a Dutch sampler!  Perhaps he is to be thought of spinning schemes and up to no good.
Other theories abound, and one I find especially interesting is that during the time the spinning monkey was most common on Dutch samplers, the Netherlands was under Catholic rule.  In many cases, the the head of the monkey is shaped as though wearing a Pope's hat - and was thought to denote the scheming and spinning of plans by the church.   During medieval times, especially, the Pope was a very political figure.  Other times, you see a crown on the head of the monkey, and I've heard that this is to denote that it is the conquering monarch who is depicted  as scheming and spinning.

Here's a picture of a particularly charming little fellow.  Click on the detail view to get a good look at him.

Our friend Jacqueline Holdsworth also featured a sampler with a nice spinning monkey on her blog "Needleprint" last October.  He's on the far right just above the middle of the sampler.

One of my very favorite posts online about this topic is this one from Tracy at Ink Circles.  When she was creating her wonderful design, Dutch Beast, she talked about the process in wonderfully amusing anecdotes in a blog set up especially for this design.  The design is so fun, and reading through it is a riot!


Many of you know the name "Spinning Monkey" because that's the person who reproduced Ackworth's Hannah Horsfall.  She has a blog talking about her creative life.

And finally, I know a few of you love to quilt as well as stitch.  Did you know there was a "Spinning Monkey" quilt design?  It's apparently a cross between a pinwheel and a monkey wrench design.  Whatever it is, I like it!

I have loved this motif for so long that I didn't hesitate to design a couple of my own and stitch them. 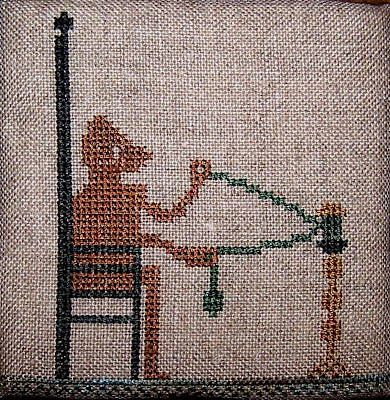 They are our Valentine's gift to you - two different Spinning Monkey charts - one with a Pope's hat and one with a crown! 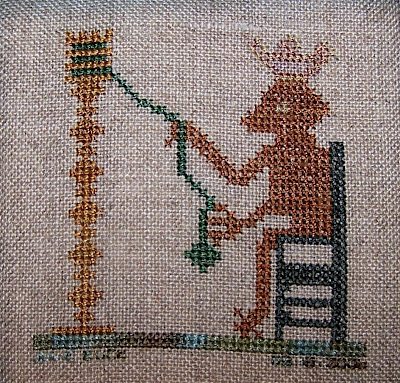