Tradition tells us that some of the earliest beginnings of today’s Santa Claus myth started with Saint Nicolas in Northern Europe! Saint Nicholas was a real person - a fourth century bishop of the city of Myra in what is now Turkey. Over the centuries, he was revered for his good works especially in aid of children, often by secretly leaving money for their care in their shoes as they slept. French nuns began giving candy to children on December 6th, St. Nicholas Feast Day, and the legend began to morph into the Santa Claus we know today, filling children’s stockings hung “in hopes that Saint Nicholas soon would be there”…

Traditional celebrations of Saint Nicholas Day in Northern Europe included gifts left in children's shoes. Good children receive treats - candies, cookies, apples and nuts, while naughty children receive switches or lumps of coal. Sometimes coins were left in the shoes, reminiscent of the life-saving dowries the saint provided. Today - especially in families of German extraction - children still put a shoe outside their bedroom doors on the eve of Saint Nicholas Day, and expect to find candy and coins or small gifts in their shoe on December 6th. 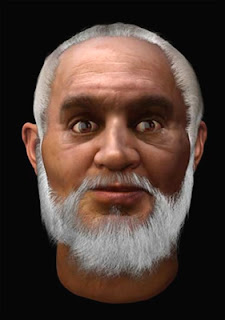 In reading about Saint Nicholas, I found a fascinating site which shows a forensically-created image of what Saint Nicholas really looked like, based on the iconographic images available. He DOES look remarkably like Santa! 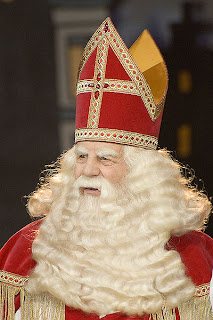 In the Netherlands, Saint Nicholas was known as Sinterklaas, and when the Dutch came to the new world, and settled in what is now New York City, they brought their traditions with them. Sinterklaas became Santa Claus and when Clement Moore wrote “Twas the Night Before Christmas” in the mid-nineteenth Century, Santa Claus was cemented as the image most associated with gift-giving at Christmas, especially for children. (More about this wonderful poem in a later blog).

Gift-giving has now become such a part of Christmas that we can’t imagine not shopping for everyone. There was a time, though, when gifts were small and from the heart – and usually hand-made. There are some wonderful examples of Victorian gifts from needle workers to their friends – tokens of friendship and esteem, which are lovely to behold.  Many people are continuing this lovely tradition today.

The talk of Saint Nicholas filling shoes also put me in mind of the shoe-themed pincushions and thimble-holders, which adorn one of the shelves in my guest room. Here are a few of my favorites. 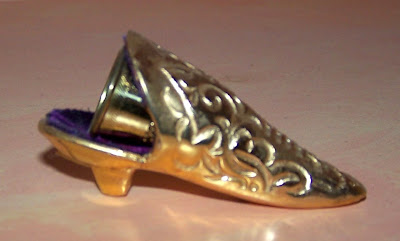 This little thimble-holder is wonderful! 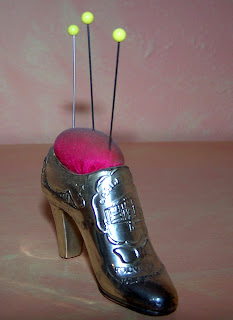 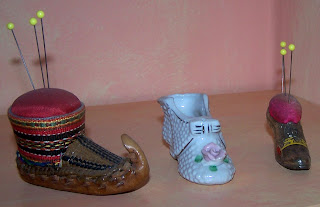 I love the variety of shoes people used for their pincushions.

Watch next week for an exciting announcement of a contest/giveaway with a holiday theme!  (hint - you must be a follower to win!)