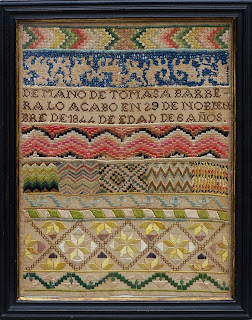 You have seen our little girl, from 1844 in a few of our products; she will be out again in some new and upcoming items. She is a beauty and shows much of what is popular and endearing in the Mexican samplers. The wonderful use of colorful threads and variety of stitches used, including the most popular to Mexican samplers, the Aztec stitch. 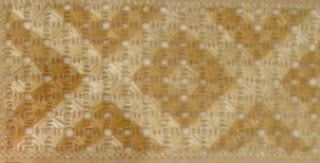 For a terrific tutorial on the Aztec Stitch, see Denise Beusen's site.  She also has a wonderful article on Mexican samplers.

Piecework Magazine also has a small bookmark project using the Aztec stitch, which is available for download.

There has not been a lot of research done in the study of Mexican samplers, but we will start with a few historical notes of interest.  Friar Thomas Gage reported in 1648 -   “The Indians make it their great commodity to employ their wives in working towels with all colors of silk, which the Spanish buy, and send to Spain. It is rare to see what works these Indian women will make in silk, such as might serve for patterns and samplers to many school-mistresses in England.”

The varied designs and patterns reflect the lasting influences of 3 cultures, Mesoamerican, European and Oriental.

Embroideries’ worked by Indian girls were evidence of a girl’s conversion to Christianity and more a European way of life.  Many motifs you find on Mexican samplers have a Germanic influence. Many of the nuns in the convents were from Germany at the time when schools were set up throughout “New Spain” (Mexico) after the conquest.

Spanish needlework at the time of the conquest included a wide variety of stitches, many of which are thought to have originated in ancient Egypt, Persia and other parts of the near East. Teaching was done with the help of examplers, or samplers. Few samplers have survived from the early period of Colonial rule.

Embroidery threads were most often silk, cotton or linen. In sixteenth-century Spanish court circles colors were generally used with restraint, and there was a vogue for black work. This style, introduced by the Arabs and deriving originally from the Persians, consisted of coal-black embroidery worked in a variety of stitches on a white ground. The elite also acquired a taste for gilt of silver and gold. Bright colors, though, were destined to exert a strong fascination in Mexican sampler making.

Popular methods of embroidery are darning over and under to create the pattern. Satin stitch, black work or Spanish stitch, running stitch, long and short stitches for shading, and cross stitch. As well many have drawn and cutwork. But the key stitch found on Mexican samplers only is the Aztec stitch. Beads also became fashionable on the Mexican samplers in the 19th century.

One symbol recalls the founding of the Aztec capital; an eagle perched on a prickly pear with a serpent in its beak. A fascination with death is expressed in many ways. Poet Octavio Paz wrote in the Labyrinth of Solitude, “the Mexican is familiar with death, jokes about it, caresses it, sleeps with it, celebrates it, it is one of his favorite toys and his most steadfast love.”  According to popular belief, the departed return to earth each year for the Festival of the Dead. Crafts inspired by this and other celebrations have a spiritual dimension rarely found in the modern world.

There are many beliefs and rituals associated with textile arts in Mexico. After the birth of a bay girl- place in hand a spindle and weaving stick as a sign that she should be diligent and housewifely.  Various depictions of the heart symbolize divine love; a heart pierced with two or more arrows, a crowned heart, a heart decorated with palms and garlands, or a heart-shaped vase sprouting flowers. Romantic love is often represented by entwined hearts. Not a lot of information is found on symbolism of motifs for Mexican samplers. Much though relates to religion and nature.

Julie and I had the opportunity to visit The Hispanic Society of America in New York City a few years ago. We had arranged a special visit of the textiles and samplers this facility owns.  What a treat we had! Not only did we see the collection of exquisite samplers and lace work, we were allowed to see beautiful examples of secular embroidery that this museum owns. If you have the opportunity to visit this museum on a trip to New York City, it is well worth your time. http://www.hispanicsociety.org/hispanic/main.htm

So this is just a mere taste of Mexican sampler making. You can see there is an opening for further research in this area and we hope someone will pick up that torch and share it with us one day.

Samplers in The European Tradition: Kathleen Staples and Margriet Hogue

Download a free chart to make a scissors fob with a Mexican-inspired motif.