What IS an etui, anyway?  According to one dictionary, it’s:

Noun1.etui - small ornamental ladies' bag for small articles -  handbag, purse, bag, pocketbook - a container used for carrying money and small personal items or accessories (especially by women); "she reached into her bag and found a comb".

And whenever it appears in a crossword puzzle, it’s always clued as “needle case”.

According to Antique Sewing Tools and Tales by Barbara D. Gullers, in the 18th and early 19th centuries, nearly all the well-to-do in Europe carried an etui.  The housewife carried one that held needles, thread, scissors, and a thimble.  The fashionable man or woman carried one that held a bottle of perfume, earscoop to remove wax, tweezers, toothpick, and a scaler to remove tarter from the teeth. A doctor would carry an etui that had knives for bloodletting. They were made from all types of fine materials such as gold, silver, tortoise shell or enamel. It was  much like a purse today except more specialized.


But you know what I’m talking about – the lovely little sewing accessories that are all the rage these days, in lots of wonderful shapes and sizes.

Etui’s made their debut in the early 1700’s in Europe, and some of the most spectacular ones to be seen are the Palais Royal sets made in France in the early 19th century.   Such things are far beyond the reach of the average stitcher, but we can dream!

There are some wonderful etuis available to stitch – so many designers have put their personal spin on them, and the results are truly delightful.  Becky and I decided we’d have a go at it, too, and came up with a pyramid etui that has pictures from one of our favorite samplers on it and quite a few little goodies inside. We loved the idea of the pyramid shape - it holds so many mysteries! 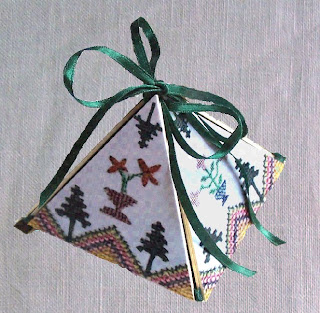 The shape of Egyptian pyramids is thought by some to represent the primordial mound from which the Egyptians believed the earth was created. The shape is also thought to be representative of the descending rays of the sun, and most pyramids were faced with polished, highly reflective white limestone, in order to give them a brilliant appearance when viewed from a distance. Pyramids were often named in ways that referred to solar luminescence, such as The Southern Shining Pyramid.  And of course, if you're a fan of Dan Brown's, then you know the theory that the pyramid with the all-seeing eye (such as on the American dollar bill) is a symbol of a vast conspiracy!  ;-)  Personally, I just think it's a very clever shape and it was a challenge for us to achieve it, especially in a small form such as this. 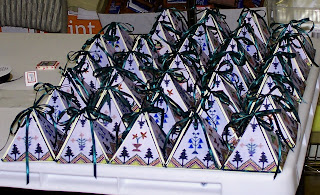 Now, when “we” come up with a new idea, it’s usually Becky, but this was my brain-child.  Of course, in the end, it was Becky who put them together because her expertise in crafting and sewing is so much more than mine.  I’m the computer gal – I can manipulate the pictures to beat the band, but getting the ribbon to lay just right?  Not so easy for me.  There certainly was a time when I think Becky would have gladly shot me for this idea – but she worked and worked on them and I think the result is spectacular!  Especially when you see them all stacked up together in our workroom.