I am amending this post because there is an urgent need for action, and I didn't want it to wait for the next posting (as you know, we often don't get back to post every week).

This is an urgent appeal from the Loudoun Museum in Leesburg, Virginia. On July 9 the Loudoun County Board of Supervisors' Finance Committee voted to recommend elimination of funding for the Loudoun Museum. If the recommendation is adopted, the museum will close and its collections dispersed. One-third of the Loudoun Museum Collection consists of textiles made in Loudoun County and northern Virginia between the 18th and 20th centuries. The collection includes schoolgirl samplers, quilts, coverlets, costumes, historic clothing, needlework tools and accessories. The Loudoun Museum sampler collection owes its existence to Betty Whiting Flemming, who worked tirelessly to acquire, document, and promote girlhood embroideries. In 1995, forty samplers were displayed in an exhibit curated by Betty. In the exhibit's accompanying catalog, "Threads of History," Flemming wrote, "Most of the embroideries were made by girls in Loudoun County between the years 1792 and 1860." Pam Stewart, former curator of the Loudoun Museum, provides this additional information: "The LM sampler collection, in addition to those made in Loudoun, includes a number of Quaker girl samplers, as well as a 1799 English silk map sampler, a Virginia centennial sampler featuring Jack Jouett, the Susan Constant, and other key VA historical sites, a Janney sampler, several sewing samplers and a knitting sampler from Germany. Another highlight is the Esther Shivers sampler, beautifully worked on dark linen - a real eye-catcher." Help keep the Loudoun Museum open and the sampler collection intact. What can you do? Email the County Board of Supervisors and argue for continued funding of the museum. Their email is: BOS@loudoun.gov.


As most of you know, we are now in the thick of putting together a major book on the samplers of Norfolk, England.  We won't tempt you with many details just yet, but as we have been spending the last few months immersed in this subject, we can't help but share some of the wonderful things we've found as we worked away.  Besides images of the samplers, in all their glory, the book is filled with information and "slices of life" from Norwich and the surrounding area.  One of the most fascinating sites we found was the George Plunkett site. George Plunkett is a man who took photographs (it seems like he must have taken them all day every day) between 1931 and 2006 of Norwich and the surrounding areas. By doing this, he captured the changing cityscape while keeping alive forever a way of life that is long gone.  Mr. Plunkett was obviously a man with a vision and a passion for his home and he recorded it lovingly throughout his life.  His son has taken up the torch by making all of his beautiful photos available online - to look at or for your personal use.  If you want to use it for more than that, write and ask permission. 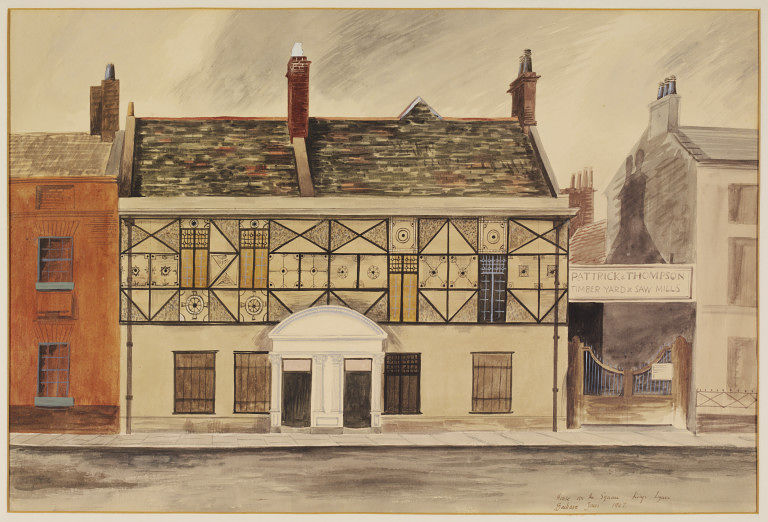 I came across a similar kind of thing while looking through the V & A collection archives online.  You could spend days wandering there - but one of the loveliest things I've found was the "Recording Britain" scheme - here is what the V & A say about it:

This work is from the 'Recording Britain' collection of topographical watercolours and drawings made in the early 1940s during the Second World War. In 1940 the Committee for the Employment of Artists in Wartime, part of the Ministry of Labour and National Service, launched a scheme to employ artists to record the home front in Britain, funded by a grant from the Pilgrim Trust. It ran until 1943 and some of the country's finest watercolour painters, such as John Piper, Sir William Russell Flint and Rowland Hilder, were commissioned to make paintings and drawings of buildings, scenes, and places which captured a sense of national identity. Their subjects were typically English: market towns and villages, churches and country estates, rural landscapes and industries, rivers and wild places, monuments and ruins. Northern Ireland was not covered, only four Welsh counties were included, and a separate scheme ran in Scotland.

The scheme was known as 'Recording the changing face of Britain' and was established by Sir Kenneth Clark, then the director of the National Gallery. It ran alongside the official War Artists' Scheme, which he also initiated. Clark was inspired by several motives: at the outbreak of war in 1939, there was a concern to document the British landscape in the face of the imminent threat of bomb damage, invasion, and loss caused by the operations of war. This was allied to an anxiety about changes to the landscape already underway, such as the rapid growth of cities, road building and housing developments, the decline of rural ways of life and industries, and new agricultural practices, which together contributed to the idea of a 'vanishing Britain'. Clark also wanted to help artists, and the traditional forms of British art such as watercolour painting, to survive during the uncertain conditions of wartime. He in turn was inspired by America's Federal Arts Project which was designed to give artists employment during the Great Depression of the 1930s.


Over 1500 works were eventually produced by 97 artists, of whom 63 were specially commissioned. At the time the collection had a propaganda role, intended to boost national morale by celebrating Britain's landscapes and heritage. Three exhibitions were held during the war at the National Gallery, and pictures from the collection were sent on touring exhibitions and to galleries all around the country. After the war, the whole collection was given to the V&A by the Pilgrim Trust in 1949, and it was documented in a four volume catalogue published between 1946 and 1949. For many years the majority of the collection was on loan to councils and record offices in each county, until recalled by the V&A around 1990. The pictures now form a memorial to the war effort, and a unique record of their time.

Becky reminded me that we have at different times, had similar programs here in the United States.  When the Oregon Trail was being traveled, there were artists along who recorded the entire trip for posterity.  And while no artists accompanied Lewis and Clark on their expedition, William Clark's journals are filled with amazing drawings that record what they saw.

I wonder sometimes what will happen as technology continues to change so much that all the wonderful photos I'm saving on Pinterest won't be available anymore!  Here are pictures from long ago just as vibrant as if they were drawn or painted yesterday!

But I am thrilled that not only large organizations like the V & A have made a real effort to put their images online for all to see, but so have individuals - like George Plunkett's family, who have kept his work alive with their website. Original lost - photograph by Dr. Chris Mullen
Here's another we found - and so amazing that now it's the only record of these tradesmen's cards... Dr. Chris Mullen photographed many tradesmen's cards from Norfolk and other areas in Britain to have them available for a website - and lucky he did as later, the boxes of original cards were destroyed so these are now the only record of them - they are beautiful and we are again indebted to an impassioned individual who has single-handedly kept these artifacts available to us for study and appreciation.

In 1797, William Faden, Geographer to His Majesty, drew a map of Norfolk which is a thing of beauty.  To own a 1797-era copy of such a map would be prohibitive, price-wise.  But an enterprising fellow named Andrew Macnair has digitally redrawn this map to provide a clear and good image for people to see - and as long as he was doing that, he has also uploaded images of the original map.  These are there to be explored in painstaking detail - so incredible to see what people do.  I sometimes marvel that not everyone is sitting and stitching or writing blogs like I seem to be all the time, but they're doing all kinds of marvelous things, and it's wonderful to share their enthusiasm! 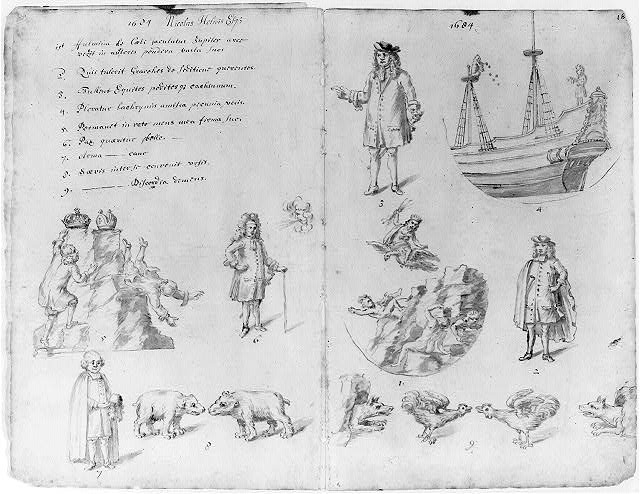 Another such organization is the Library of Congress here in the US.  In fact, they go one better, and if an object is of such age that it is in the public domain, and their image is simply a true and faithful representation of the original (in other words, a photograph) - they claim no ownership of the image.   Keep in mind, though, that most images you find online ARE subject to copyright.  Check thoroughly before you use them and ask permission.  Many people are happy to share their images, but you need only think how you would feel if something you worked very hard on were taken without asking, to realize that asking permission is always the right thing to do.  And if you can't figure out who to ask, or how, then don't use the image.  There are always others to be found.

We haven't shown you many products lately, but we are busy working on a whole raft of things for the late summer, early autumn.  Meanwhile, those who have been having the Tokens of Friendship items appearing on their doorsteps have only a month or so to wait for the next one.  For the rest of you, we'll tease a bit by showing the latest token to go out in the spring - if you'd like to sign up for next year, watch the blog starting in mid-November - we'll be doing this again - it's been so much fun!

Here's the package everyone received.... 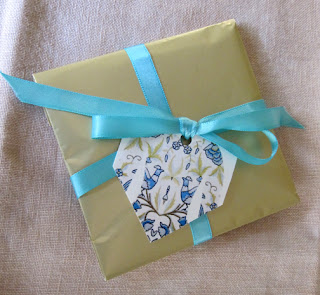 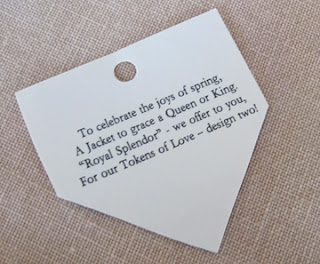 And in the package was the Royal Splendor Jacket etui! 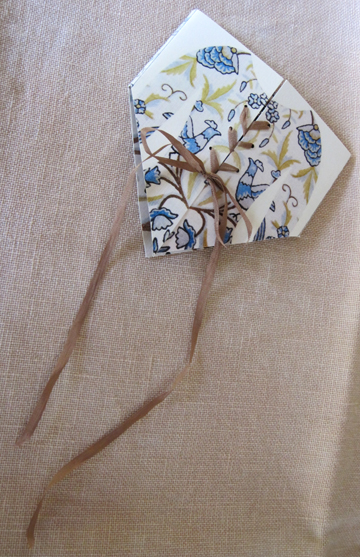 And when you open the jacket, you find beautiful pearl-headed pins, needles, and a bejewelled needle-threader nestled in a bed of 100% wool felt. 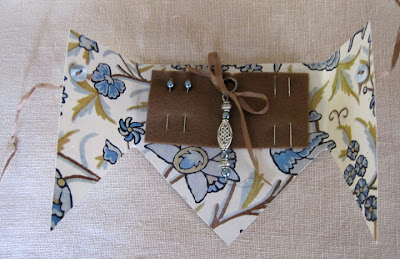 We've been inspired by all things Elizabethan lately, and it shows - but I don't think anyone minds.  :D