March 1st was the feast of St. David, the patron saint of Wales, and a Welsh national holiday, so today we are going to share with you Welsh Samplers and some other yummy things from Wales.
Some important symbols of Wales are the Leek, Daffodil and Dragon. You would wear a leek in your cap in memory of a famous battle, where Welshmen were said to have worn leeks on their hats, to distinguish them from their Saxon foes. Or tuck a leek under your pillow, to dream of your true love. You could also enjoy them in a lovely Potato Leek  soup. 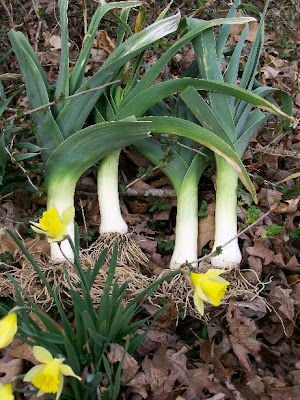 The daffodil has become the more favored emblem of late, however, since some people find that it makes a more attractive buttonhole on St. David's day. Daffodils and new-born lambs herald the summer in Wales. 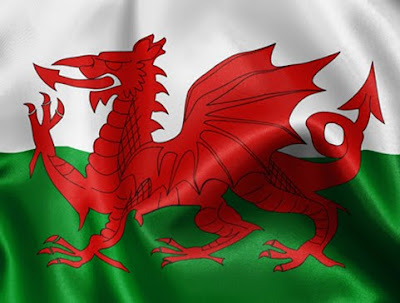 The Red Dragon is seen on the Welsh Flag. The ancient poets Aneirin and Taliesin use the Welsh word for dragon "draig" in the sense of "warrior" or "leader" and this usage remained to the middle ages. In the Historia Brittonum (ascribed to Nennius) of around 800 A.D. the dragon is seen as a symbol of national independence in the story of the red dragon battling with the white dragon of the Saxon enemy.
Today, many people celebrate St David's day by wearing a daffodil or baby leek pinned to their clothing. Wales often uses the flag of St David, which contains the red dragon, as its national flag. 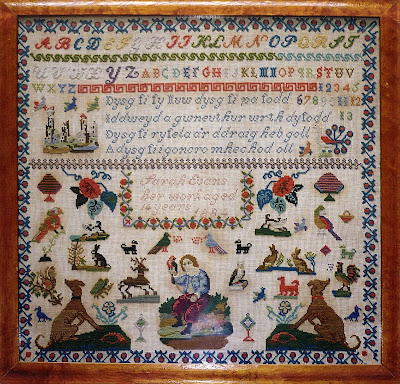 A very small number of samplers survive with actual Welsh language inscribed on them.  Most of the Welsh samplers that have survived are from late Georgian or Victorian times.  English was the language taught in the schools and so this was also inscribed on many of their samplers, practicing what was being taught, to better learn it as in reciting or inscribing with a needle. 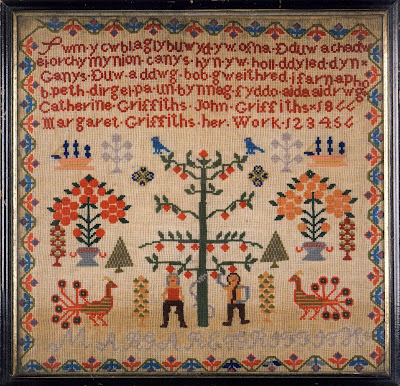 It is thought that since English is the language of the schools that the Welsh language samplers were probably taught either at home or in the chapel Sunday schools or evening meetings.  The Welsh verses are strongly religious and clearly doubled as teaching texts. 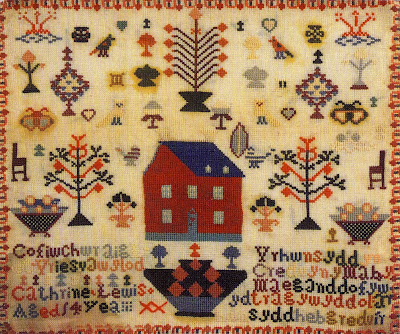 The English language Welsh samplers ran the gamut of styles typical of the day and many are perhaps from the schools in the area at the time known to have advertised teaching sewing.

The Carmarthen Oak border found on a sampler might be from the town of Carmarthen itself and from Wood's Row Sewing and Reading school. 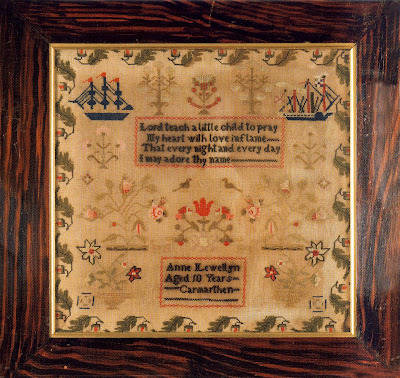 No special motifs are predominant in the samplers shown, but several contain ships and that could be because it reflects the heavy maritime industry of Caernarvon. 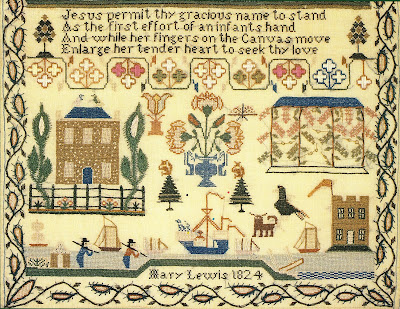 An unexpected place that samplers appeared in Wales was on The Purse or prize-bag. Purses contained prize money given at local chapel eisteddfodau.

These were particularly found in Pembrokeshire and Cardiganshire. The winners were expected to wear the purses throughout the eisteddfod. 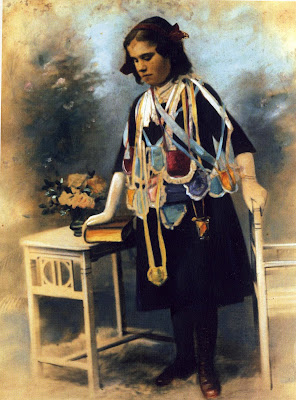 An eisteddfod is a Welsh festival of literature, music and performance. ... "....The present form of the eisteddfod is a nineteenth century creation. Wales at that time was a country where the national language and culture lacked patronage because the property-owning gentry had become Anglicized. The medieval meeting of the bards called an eisteddfod was revived as a means of attracting patronage for Welsh cultural activity. At first competitions were confined to poetry composition and harp playing but today choir singing, bands, acting, recitation, fiction writing, painting and much more is judged at an eisteddfod."

I hope this wee bit of Welsh history and information on their samplers has tempted you to seek more knowledge of their works.  We have added some sources here for you to continue your armchair travels through this area.

The Sampler Tea Room and Museum. Should you find yourself touring Wales here is a stop for any sampler lover or historian. I have drooled over the web site, being a lover of samplers and tea. The Tea Room serves homemade food and features a Museum of Samplers, WWII Home Front Experience and other displays in St Davids, Pembrokeshire


If you cannot make it to Wales, here is a recipe for Welsh Tea Cakes from National Geographic.

While you enjoy your Welsh Tea Cakes, you can take a tour of 113 samplers on line at the Museum of Welsh Life.

All About Thyme: A Weekly Calendar of Times & Seasonings

"On the wall hangs a good old Welsh sampler, which, in a variety of colours, with green and red preponderating, depicting Eve taking the apple, is also the work of Miss Rhydderch.  The making of samplers is another Welsh craft that shows skill and patience."

Last but not least is another recipe for Potato and Leek soup.


Julia Childs' Potage Parmentier Revisited
I'm following a low-fat diet, so have made some revisions to Julia Childs' classic recipe - this is absolutely yummy, and a lot less fat than the original. Ingredients3-4 cups of Yukon gold potatoes (1 lb.), peeled and chopped3 cups of leeks, white and green parts, thinly sliced and rinsed1 tsp of salt 2 quarts (8 cups) of water (you can also use vegetable stock, or low sodium fat free chicken stock if you prefer)6 tbsp fat free half and half3 tbsp chopped fresh chives Directions1. Combine potatoes, leeks, water, and salt in a large pot. Bring to a boil, then reduce the heat and simmer for 40-50 minutes. 2. Using an immersion blender or potato masher, pulverize the soup until it is at the desired consistency. 3. Finish by adding the half and half and stir to blend. Serve with chopped chives as a garnish. Serves 6